Why Women Are Critical to the Future of Your Business

Despite controlling a significant portion of personal wealth in the U.S., women are often left out of long-term financial planning conversations. Retirement Director Sara Tegethoff Lowery discusses how the industry has long demonstrated bias against female investors and explains why it’s so critical for financial professionals to build relationships with this segment of their client base.

Millennials are often cited as the primary audience financial professionals should target to attract new clients. While engaging with younger investors is important, I would argue that a key segment of your current client base – female investors – is where you should consider focusing your energy.

My stance is based on several facts:

These statistics alone make it pretty clear that focusing on female investors is a critical part of growing your business. But they don’t reveal the whole story, which is that women, despite being clearly in need of financial services, have long been disregarded by the industry – and are often overlooked by their financial professionals.

Boston Consulting Group released a study in April 2020 in which they surveyed women to determine whether the industry held an unconscious bias. One of the respondents – a woman who was the household’s primary breadwinner – reported that she met with a financial professional to interview him as the couple’s wealth advisor. After the meeting, the financial professional sent a package of documents addressed to the husband. As if that wasn’t bad enough, the woman was sent a charm bracelet.4

It’s scenarios like this that have led many women to form negative views about the financial services industry. Several respondents in the Boston Consulting Group mentioned that they felt talked down to by industry professionals, or that an assumption was made that they had inherited their wealth or depended on their spouse’s income, rather than earning it themselves.

Research shows that more than half of women 50 and older let their spouses take the lead when it comes to long-term planning. As a result, women tend to not develop a strong relationship with the couple’s financial professional. In my opinion, the industry is at least partly to blame. Women tend to be stereotyped as not being interested in investing, being risk adverse and having a hard time making up their minds. None of these stereotypes is true. In fact, several studies have indicated that women, on their own, are better at managing money than men. They are less emotional when it comes to investing, trade less frequently and tend to be better savers.5

Don’t Leave Women Out of the Wealth Conversation 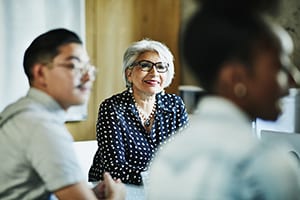 You’ve probably heard the statistic that 80% of women will leave their financial professional within a year of their spouse’s death.6 If these women have consistently been left out of the financial planning conversation over many years, it’s not surprising that they would choose to turn elsewhere for advice when the time comes to take control of their own finances.

Granted, many couples do agree to take a divide-and-conquer approach to finances. Women often manage day-to-day transactions like bill paying, budgeting and planning for things such as a vacation. Men are more likely to take control of long-term planning and investing, leading them to develop a closer relationship with the couple’s financial professional. That relationship and ongoing consultation helps men improve their financial literacy over time, whereas women, being left out of these conversations, don’t gain that same level of investing knowledge.

That’s why it is so critical that the conversations you have with clients today must include both partners – not just the designated point person.

Re-Examine How You Communicate with Female Clients

It isn’t easy to look at oneself objectively, but I would encourage you to take a step back and consider your communication style. If the primary contact in a household is the husband, are you dumbing down the conversation when the wife is present – or ignoring her completely? Do you ask clients who are women what their goals and objectives are, even in the presences of their spouse? Do you take time to call your female clients when the market is performing erratically? While you may contact one half of a couple to allay fears, answer questions and gauge comfort levels, is this conversation happening with both parties, and not necessarily jointly? 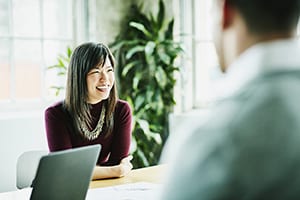 To illustrate the importance of equal communication with male and female clients, I’ll relate a story I heard when I tuned into a webinar on women and investing recently. One of the participants described how her father had passed away when she was quite young, leaving her mother a single parent and provider to two young children. Not too long after the father passed away, the mother was diagnosed with a rare form of cancer. Her financial professional worked closely with her through all aspects of how she was going to provide for her children, even helping her find the right medical professionals to treat her cancer.

This speaker’s story had a happy ending: Her mother survived her illness, and the children grew up and now work closely with their mother’s financial professional. I thought it was an inspiring example of how this individual went above and beyond to connect with a young widow and ultimately made an impact on future generations.

Today, being a financial professional isn’t about getting the best returns or having the lowest fees. It’s about connecting with your clients, whether they are men or women. And the best approach to retaining female clients for the long term – and ultimately engaging their millennial children – is to already have a relationship with them upon the death of a spouse, even if they aren’t your go-to person in the household.

The opinions and views expressed are as of the date published and are subject to change. They are for information purposes only and should not be used or construed as an offer to sell, a solicitation of an offer to buy, or a recommendation to buy, sell or hold any security, investment strategy or market sector. No forecasts can be guaranteed. Opinions and examples are meant as an illustration of broader themes, are not an indication of trading intent and may not reflect the views of others in the organization. It is not intended to indicate or imply that any illustration/example mentioned is now or was ever held in any portfolio. Janus Henderson Group plc through its subsidiaries may manage investment products with a financial interest in securities mentioned herein and any comments should not be construed as a reflection on the past or future profitability. There is no guarantee that the information supplied is accurate, complete, or timely, nor are there any warranties with regards to the results obtained from its use. Past performance is no guarantee of future results. Investing involves risk, including the possible loss of principal and fluctuation of value.

Head of Defined Contribution and Wealth Advisor Services Matt Sommer helped conduct a survey that explored the relationship between financial knowledge and the decision to seek investment advice and grant trading discretion. The results have significant implications for how financial professionals engage with clients.

Direct indexing and personalization used to be available only to ultra-high-net-worth investors, but technical advances and more widespread computing power are rapidly bringing those offerings to smaller investors.

Making the Transition from Managing Assets to Managing Wealth: An Advisor's Checklist

report by Morningstar Managed Portfolios
This piece is approved to use with clients.

A brief checklist of considerations for adding managed portfolios to your practice.