Market Insights
Market Outlooks
Print
Share
article by Nuveen
This piece is approved to use with clients.

Stock prices have roared back strongly through the second quarter, as investors grew increasingly optimistic over prospects for economic reopening and the unprecedented monetary policy support that provided a strong tailwind for equities. At this point, however, stocks are looking somewhat richly valued and we think investors may be looking past some key risks. We think long-term prospects for stocks remain compelling, but markets may be in for prolonged volatility, a possible setback and ongoing churning over the next few months.

More fiscal stimulus, but monetary policy is running out of steam

The coronavirus pandemic and accompanying economic shutdowns have undoubtedly caused a deep recession. Per the IMF, U.S. GDP will fall 8% and global GDP 5% in 2020. U.S. industrial production is 16% below its high,1 and the unemployment rate stands at 13.3% or 16.4% (depending on how furloughed workers are counted).2 The situation would clearly be worse were it not for extraordinary fiscal and monetary stimulus. The U.S. has increased federal spending by $2.9 trillion since the pandemic began, and we expect another $1 to $1.5 trillion package before the end of the summer. Governments around the world have also been pumping money into their economies. At the same time, the Federal Reserve and other central banks have slashed policy rates to zero or below and allowed real rates to collapse. Forward guidance suggests rates will remain zero-bound through at least the end of 2022. Monetary policy, however, has already become about as accommodative as it can. Central banks are continuing to ease, but that easing is no longer accelerating.

Stocks from here: a cautious outlook

The biggest shock of the last few months is how quickly stocks came roaring back. The S&P 500 Index is less than 10% below its February all-time high.3 And at this point, we see several reasons for caution. The first is valuation: The 12-month forward P/E ratio for the S&P 500 has climbed from a low of 13.4X on March 23 to 21.4X now, as investors began pricing in prospects for economic recovery.3 Such an acceleration is probably setting investors up for possible disappointments over economic and earnings results.

We are also concerned about political risks, which will likely heat up over the coming months. There is a growing possibility of a Democratic sweep in November, which could result in tax increases and a tougher regulatory environment. We are also concerned about the deteriorating U.S./China relationship and trade disputes with Europe. These risks were easy to overlook when investors were focused on easing monetary policy, but we expect they will come back into focus. Additionally, the future path of the coronavirus itself remains a wildcard. Infection levels are rising in many countries and in the U.S. Sunbelt. And this wave is likely to continue as economies continue to re-open. Investors are likely to continue to be rattled by news of new spikes and a slowdown or reversal of reopening policies. At this point, we think stocks as a whole appear fully valued. Over the next few months, we expect stocks to be trendless and volatile. A correction is possible, but we don’t expect it would morph into a renewed bear market since the underlying economy remains sound. We expect stocks to continue trading at a level between 2,750 and 3,150 for the S&P 500 for the time being. Additional clarity on the political front, news of effective treatment for the virus and a more coherent and consistent public health policy would all help stocks to break out of this range to the upside, which could happen later this year or in 2021.

On an inflation-adjusted basis, the 10-year cumulative average annual return for stocks is 12.4%, which is quite high relative to a longer history and is almost certainly unsustainable.4 Over the long-term, we think secular factors such as a rise in populism and protectionism around the world, the likelihood of higher tax rates in the U.S., rising debt and deficit levels, an eventual uptick in inflation and higher equity valuations will all conspire to keep stock returns relatively low. These same factors are also going to hurt returns on other asset classes, chiefly areas of the bond market. Since the early 1980s, long-term inflation has been falling, providing a secular tailwind for the bond market. But inflation now appears to be bottoming, which spells trouble for fixed income markets. We expect stocks will outperform bonds over the coming years, but that will provide little solace for equity investors if their returns are limited as well. This means that investors should focus on selectivity, be nimble and flexible and rely on diligent research to uncover opportunities. In particular, we think it makes sense to focus on areas of the equity market that have not yet fully priced in the effects of the current and pending global economic recovery. In particular, cyclical areas of the market look more attractive than defensive ones. From a sector perspective, we favor technology and health care and expect the relative cheapness and reasonable quality of the financial sector could also make that area of the market attractive. Additionally, we expect nonU.S. stocks to start outperforming on a relative basis later this year, especially if we see continued weakness in the U.S. dollar. 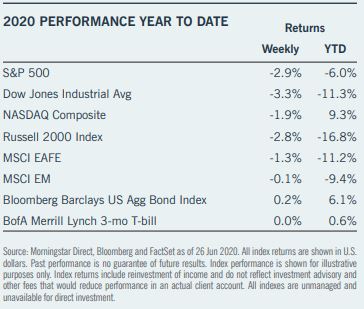 “Investors should focus on selectivity, be nimble and flexible and rely on diligent research to uncover opportunities.”

For more information or to subscribe, please visit nuveen.com. 1 Source: Federal Reserve 2 Source: Bureau of Labor Statistics 3 Source: Bloomberg, Morningstar and FactSet 4 Source: Bank Credit Analyst The S&P 500 Index is a capitalization-weighted index of 500 stocks designed to measure the performance of the broad domestic economy. The Dow Jones Industrial Average is a price-weighted average of 30 significant stocks traded on the New York Stock Exchange and the Nasdaq. The Nasdaq Composite is a stock market index of the common stocks and similar securities listed on the NASDAQ stock market. The Russell 2000 Index measures the performance approximately 2,000 small cap companies in the Russell 3000 Index, which is made up of 3,000 of the biggest U.S. stocks. Euro Stoxx 50 is an index of 50 of the largest and most liquid stocks of companies in the eurozone. FTSE 100 Index is a capitalization-weighted index of the 100 most highly capitalized companies traded on the London Stock Exchange. Deutsche Borse AG German Stock Index (DAX Index) is a total return index of 30 selected German blue chip stocks traded on the Frankfurt Stock Exchange. Nikkei 225 Index is a price-weighted average of 225 top-rated Japanese companies listed in the First Section of the Tokyo Stock Exchange. Hong Kong Hang Seng Index is a free-float capitalization-weighted index of selection of companies from the Stock Exchange of Hong Kong. Shanghai Stock Exchange Composite is a capitalization-weighted index that tracks the daily price performance of all A-shares and B-shares listed on the Shanghai Stock Exchange. MSCI EAFE Index is a free float-adjusted market capitalization weighted index designed to measure developed market equity performance, excluding the U.S. and Canada. The MSCI Emerging Markets Index is a free float-adjusted market capitalization index that is designed to measure equity market performance of emerging markets. Bloomberg Barclays U.S. Aggregate Bond Index covers the U.S. investment grade fixed rate bond market. The BofA Merrill Lynch 3-Month U.S. Treasury Bill Index is an unmanaged market index of U.S. Treasury securities maturing in 90 days that assumes reinvestment of all income. This material is not intended to be a recommendation or investment advice, does not constitute a solicitation to buy, sell or hold a security or an investment strategy, and is not provided in a fiduciary capacity. The information provided does not take into account the specific objectives or circumstances of any particular investor, or suggest any specific course of action. Investment decisions should be made based on an investor’s objectives and circumstances and in consultation with his or her advisors. Risks and other important considerations The views and opinions expressed are for informational and educational purposes only as of the date of writing and may change at any time based on market or other conditions and may not come to pass. This material is not intended to be relied upon as investment advice or recommendations, does not constitute a solicitation to buy or sell securities and should not be considered specific legal, investment or tax advice. The information provided does not take into account the specific objectives, financial situation, or particular needs of any specific person. All investments carry a certain degree of risk and there is no assurance that an investment will provide positive performance over any period of time. Equity investments are subject to market risk or the risk that stocks will decline in response to such factors as adverse company news or industry developments or a general economic decline. Debt or fixed income securities are subject to market risk, credit risk, interest rate risk, call risk, tax risk, political and economic risk, and income risk. As interest rates rise, bond prices fall. Non-investment-grade bonds involve heightened credit risk, liquidity risk, and potential for default. Foreign investing involves additional risks, including currency fluctuation, political and economic instability, lack of liquidity and differing legal and accounting standards. These risks are magnified in emerging markets. Past performance is no guarantee of future results. CFA® and Chartered Financial Analyst® are registered trademarks owned by CFA Institute. Nuveen Asset Management, LLC is a registered investment adviser and an affiliate of Nuveen, LLC. This information does not constitute investment research as defined under MiFID.

AAM's CEO/CIO Scott Colyer speaks on the virus, the Fed, and junk bonds during the COVID-19 induced recession.

We expect a China upturn in 2021, supporting Asian economies. Valuations are reasonable, though recovery from the coronavirus may be a gradual process.