Quarterly Report: The War to End All Wars

Such was the assessment originally applied to “The Great War” that ran from 1914 to 1918 – a war so violent and so bloody the world was convinced nothing so horrific could or would ever happen again. The world was wrong. Two decades later the world was thrust into a second “great war” from 1939 to 1945. Today – this time seven decades later – the international community is, again, confronting a geopolitical crisis with possibly long-ranging ramifications. What will history have to say about this barbaric invasion? First and foremost, it will mourn for the Ukrainian people; they deserved none of this. But history should also identify several enduring geoeconomic trends that were either born out of, or accelerated by, this unnecessary conflict.

Private power. This is the first war wherein the private sector played a pivotal role in its outcome. Social media – a peace-time source of conflict – has been a war-time force for good, providing a direct window into the horrors of war thanks to the recording devices now in people’s pockets. Tech companies – from Microsoft to Starlink (a division of SpaceX) – have served in the war effort, either preventing or providing internet access depending on the circumstance. Other major companies – Coca-Cola, Disney, McDonald’s, Nike, etc. – showcased their unique source of economic power, pulling their influential brands out of Russia (in many cases, ahead of official sanctions).

Deglobalization. Populism – which can be sourced back to the financial crisis – represented the first sustained hit to globalism. The pandemic – and resulting supply chain impairment – took the next whack. The war in Ukraine may be strike three. The current world order – installed at the end of World War II and fortified by the West’s Cold War victory – is under attack. The West-East wedge has never been bigger, and many countries are recognizing that global dependence (think energy) equals untenable vulnerability. This is not the first “peak global” episode. Global trade (as a % of activity) also rose and fell ahead of World War I – and took 60 years to regain pre-WWI levels.

Decentralization. While deglobalization hits the economy, the financial world braces for decentralization. And nothing is more central to global finance than the U.S. dollar – the world’s “reserve currency” since World War II. U.S. dollars represent ~90% of global financial transactions and ~60% of global central bank holdings. That incumbency can make it hard for the dollar to be displaced anytime soon, but risks do exist. Central banks eye cryptocurrency, while geopolitics may also be a disruptor. Example: The U.S. cut Russia’s access to $0.6 trillion it holds at the Federal Reserve1 – a tactical win but strategic misstep? Russia’s heinous actions justified the response – but other central banks must now wonder if this could happen to them.

Opportunity amid chaos? This war is unlikely to be the last – and its impact will echo for years. Uncertainty often causes fixation on the negative, but opportunities also arise. Much investment may be needed in coming years (supply chain reorientation as one example). As we wait, a well-diversified portfolio can protect against incoming fire.

The advent of war on the European continent has negatively impacted 2022 regional economic growth expectations to varying degrees. Europe is most directly impacted (other than Russia). China – already dealing with another COVID-19 breakout (due to a zero-COVID policy and less effective vaccines) – is at risk of second-order effects should it provide support to Russia. The U.S. is less impacted – both due to its much smaller reliance on foreign natural resources and its greater economic momentum entering the war. 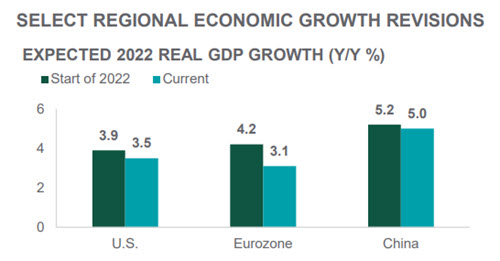 Any expectations (or hopes) that inflation was still transitory took a big hit with Russia’s invasion of Ukraine. Beyond the notable – and now at risk – amount of oil and natural gas coming from Russia, the prospect of reduced global crop production this growing season is a real risk. Russia/Ukraine planting of wheat (29% of global harvest) may be disrupted and farmers are dealing with shortages in global fertilizer supply (of which Russia produces ~8%). Ukraine and Russia are also major producers of several industrial metals. 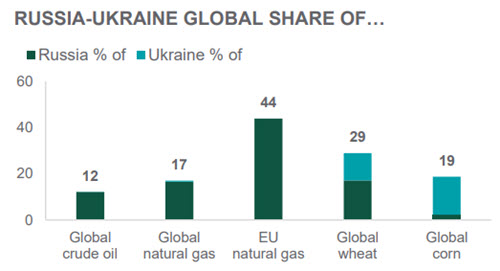 The Federal Reserve is walking a tightrope, trying to balance the war’s inflationary impacts with the war’s effect on investor sentiment and market functioning. As seen in the chart, full-year 2022 rate hike expectations have whipped around a bit. But, as we end the quarter, the market seems more sympathetic to the inflation argument – currently expecting a total of nine-plus rate hikes over the course of 2022. With one rate hike in place and only six more meetings this year, markets anticipate a couple of 0.5% hikes will be in the mix. 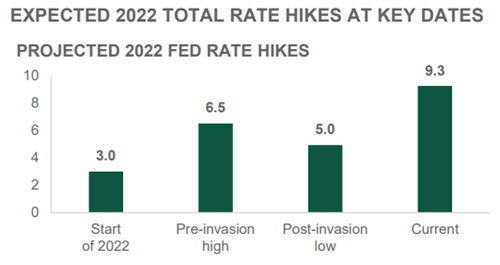 While we cover the implications of key developments on the next page, at a high level, we note financial markets often overreact in the near term and underreact in the intermediate-to-longer term. We saw that play out this quarter. The chart shows the initial post-war drop in equity markets (notably in Europe) before recovering much of that heading into Q2. Conversely, natural resources extended pre-war gains before consolidating. But the geopolitical ramifications are likely not over – and investors should be prepared for more volatility. 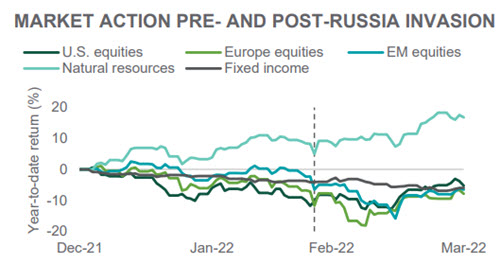 The Russia-Ukraine war accelerated the upward trend in Treasury yields as its inflationary impacts aroused a more hawkish Fed. The Fed executed a 25 bp hike and signaled a will to restore price stability at the expense of economic growth if needed. Short-end yields soared on higher rate hike expectations. Long-end yields rose, though to a lesser extent due to lower economic growth prospects and quantitative easing impacts. Real rates remain low, but parts of the curve are inverted. Whether the Fed can execute a soft landing remains to be seen. 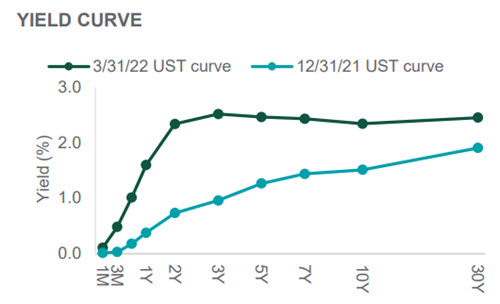 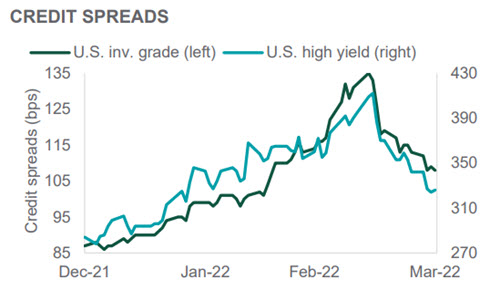 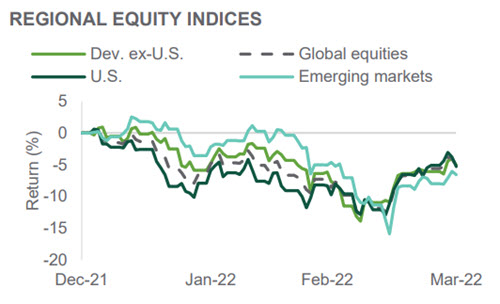 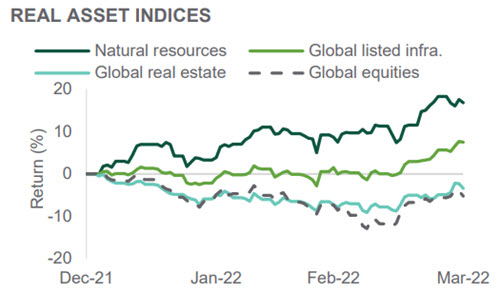 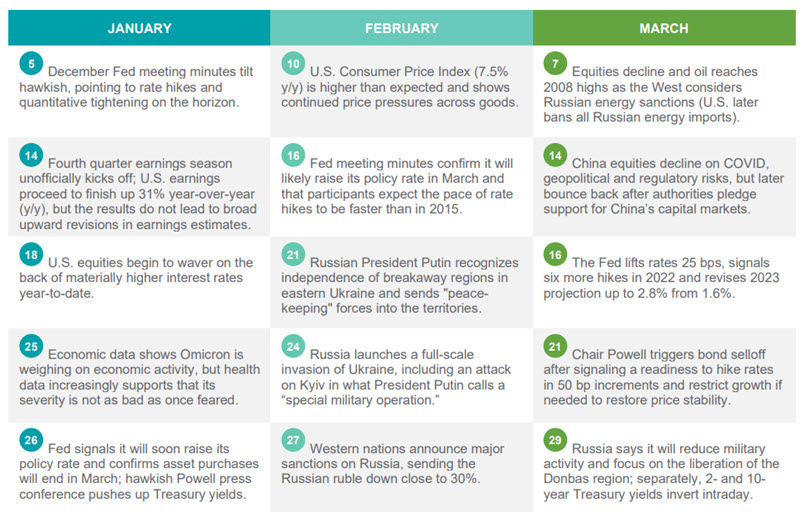 For Asia-Pacific and Europe markets, this information is directed to institutional, professional and wholesale clients or investors only and should not be relied upon by retail clients or investors. The information is not intended for distribution or use by any person in any jurisdiction where such distribution would be contrary to local law or regulation. Northern Trust and its affiliates may have positions in and may effect transactions in the markets, contracts and related investments different than described in this information. This information is obtained from sources believed to be reliable, and its accuracy and completeness are not guaranteed. Information does not constitute a recommendation of any investment strategy, is not intended as investment advice and does not take into account all the circumstances of each investor. Opinions and forecasts discussed are those of the author, do not necessarily reflect the views of Northern Trust and are subject to change without notice.

Past performance is no guarantee of future results. Performance returns and the principal value of an investment will fluctuate. Performance returns contained herein are subject to revision by Northern Trust. Comparative indices shown are provided as an indication of the performance of a particular segment of the capital markets and/or alternative strategies in general. Index performance returns do not reflect any management fees, transaction costs or expenses. It is not possible to invest directly in any index. For additional information on fees, please refer to Part 2a of the Form ADV or consult a Northern Trust representative.

Forward-looking statements and assumptions are Northern Trust’s current estimates or expectations of future events or future results based upon proprietary research and should not be construed as an estimate or promise of results that a portfolio may achieve.  Actual results could differ materially from the results indicated by this information.

We live in a suburb with a lot of wildlife.

Weekly Market Compass: Is everything going according to plan?

It was another wild week for assets, with major stock indices — and many other asset prices — down.

Weekly Market Compass: Markets struggle to adjust in the face of Fed uncertainty

I’m so old that I can remember “pre-QE” fixed income markets — the time before quantitative easing when yields were more normal.