Financial Planning
Retirement
Print
Share
article by Janus Henderson Investors
This piece is approved to use with clients.

The Not-So-Easy Steps to Investing Success

Longer-maturity U.S. government bond yields have been slowly rising since early August, when the 10-year Treasury hit a record low of 0.51%. But on January 6,1 the day after the Georgia special election appeared poised to hand control of the Senate to Democrats, the yield spiked above 1%. Just three days later, it hit a new post-crisis high of 1.15%. Do we expect a trend toward rapidly higher yields from here? In a word, no. However, the balance of risks suggests higher government bond yields are still more likely than lower ones in the quarters ahead.

Democratic control of both the legislative and executive branches suggests greater economic stimulus is likely. The most recent headlines – which are always just a starting point – report President Biden is seeking another relief package of nearly $2 trillion, almost 10% of U.S. GDP.2 Since more stimulus is intended to spur more economic growth, it increases the chances of a more normal economic environment and thus more normal levels of interest rates. But it will take time and is not without risks.

A full recovery of the U.S. economy depends on a successful global effort to vaccinate the world’s population from an evolving virus – by no means a straightforward process. Even after the vaccination effort is complete and herd immunity is reached, it will take time to reduce the slack in the economy. Unemployment is elevated, allowing significant growth before the economy is at risk of overheating.

Finally, the Fed has already lowered interest rates to zero while funding unprecedented quantitative easing (the direct purchases of bonds). With reduced options to stimulate the economy further, if needed, they are more likely to err on the side of caution, delaying interest-rate hikes until they are certain the recovery is here to stay.

Are Historical Yields a Good Indicator of Future Yields?

Current yields are fundamentally too low for the level of economic activity today, never mind what is expected in the next year or two. The chart below shows the path of recent 10-year bond yields, as well as the yield from 10-year Treasury Inflation Protected Securities (TIPS), which illustrates a real yield – the yield realized after taking expected inflation into account. Before the crisis, 10-year yields ranged from 1.5% to 2.0%, well above current levels; just a year before that, they were closer to 3.0%. Real 10-year yields have been negative for over two years and spent the bulk of 2020 at near -1%. Normalizing economic activity should lead to more normalization in interest rates. As a result, 1.5% – the level 10-year bonds traded on January 31, just before the U.S. declared COVID-19 a public health emergency – could well be touched this year. 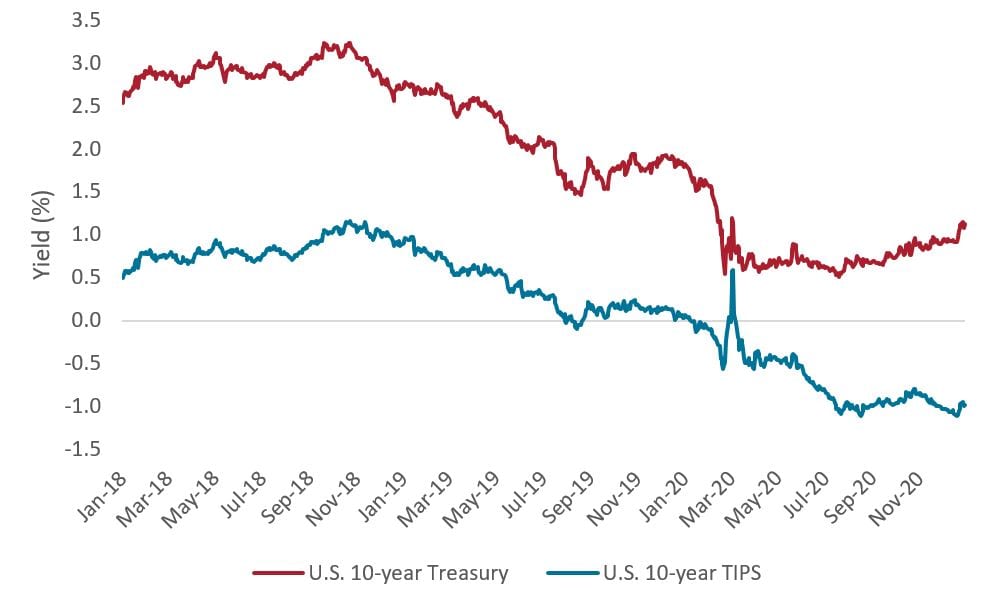 Positioning for a Higher-Rate World

In the meantime, we – and the market – expect the Fed to keep a firm lid on short-term rates and their thumb on longer-term rates, buying as needed to prevent a sharp rise in rates that could disrupt the economic recovery. Thus, we have a bit of a conundrum: Rates are “too low” and the market agrees the Fed is unlikely to raise them soon, and yet the market is pushing longer-maturity yields higher. But maybe this is exactly what the Fed wants: A slow, tenuous rise in longer-dated bonds. This would effectively be a Goldilocks scenario for the zero-rate, post-COVID era: Not too hot to threaten the recovery, and not too cool to require an (inevitable) sudden and dramatic rise in rates down the road.

Keep in mind that the stock market has adjusted to the improved expectations for economic growth in recent months, while the bond market has been more subdued. Perhaps slowly closing the gap between what is priced into the stock and bond markets is in the Fed’s interest and would ultimately be better – like the right temperature of porridge – for long-term sustained economic growth.

While bonds have been and are likely to remain in demand by investors seeking yield or diversification from equities (or both), it looks increasingly likely that we have seen the low point in yields for the current cycle. As higher yields will be more prominent at the longer end of the curve given the stability of policy rates at the short end, we encourage investors to consider how much interest rate risk they have in their portfolios and make sure it is appropriate for their needs.

Rising rates can be a headwind for a bond portfolio but finding the right balance of interest-rate risk and diversification is key as the path toward higher rates is likely to fluctuate. Unexpected geopolitical, economic or virus-related events could see equities falter and interest rates decline again, boosting bond returns. Furthermore, as markets are prone to being overbought and oversold around a trend, tactical adjustments in interest rate exposure could prove to be as valuable as strategic positions. While the trend may be toward higher interest rates, surprises will inevitably appear, and circumstances will change. As such, we would encourage investors, to remain active as they position their portfolios for higher yields by recognizing volatility around a trend as an opportunity to dynamically adjust risk and add value.

10-Year Treasury Yield is the interest rate on U.S. Treasury bonds that will mature 10 years from the date of purchase.

The opinions and views expressed are as of the date published and are subject to change. They are for information purposes only and should not be used or construed as an offer to sell, a solicitation of an offer to buy, or a recommendation to buy, sell or hold any security, investment strategy or market sector. No forecasts can be guaranteed. Opinions and examples are meant as an illustration of broader themes, are not an indication of trading intent and may not reflect the views of others in the organization. It is not intended to indicate or imply that any illustration/example mentioned is now or was ever held in any portfolio. Janus Henderson Group plc through its subsidiaries may manage investment products with a financial interest in securities mentioned herein and any comments should not be construed as a reflection on the past or future profitability. There is no guarantee that the information supplied is accurate, complete, or timely, nor are there any warranties with regards to the results obtained from its use. Past performance is no guarantee of future results. Investing involves risk, including the possible loss of principal and fluctuation of value.

Diversification neither assures a profit nor eliminates the risk of experiencing investment losses.

Fixed income securities are subject to interest rate, inflation, credit and default risk.  The bond market is volatile. As interest rates rise, bond prices usually fall, and vice versa.  The return of principal is not guaranteed, and prices may decline if an issuer fails to make timely payments or its credit strength weakens.

High-yield or "junk" bonds involve a greater risk of default and price volatility and can experience sudden and sharp price swings.

Because of their inflation adjustment feature, inflation-linked bonds typically have lower yields than conventional fixed-rate bonds and normally decline in price when real interest rates rise.

In the second post of a three-part series, Head of Knowledge Labs® Professional Development Michael Futterman explains how to transform referral sources into advocates through deliberate, personalized client experiences.

report by Janus Henderson Investors
This piece is approved to use with clients.

Collateralized Loan Obligations (CLOs) are managed portfolios of bank loans that have been securitized into different instruments of varying credit risk and thus varying credit ratings.

Can I invest my IRA in this?

Alternative assets, such as cryptocurrencies, art, private equity and more, have seen a surge in press coverage over the past decade, to the point that many of these alternative investments have become more mainstream than ever before.