Market Insights
Market Outlooks
Print
Download
Share
report by Brinker Capital
This piece is approved to use with clients.

Weekly Wire: Don’t get down if the markets aren’t dancing in September

It’s been a positive – if somewhat bumpy – year for US equities, with the S&P 500 Index (S&P 500) up about 17% in 2019, despite pullbacks of about 7% in May and August. The robust performance of the US stock market isn’t surprising given the US economy has grown about 2.5% year-to-date, corporate profits are up year over year (albeit modestly), unemployment is low, consumer confidence is high, and inflation is muted. Brinker Capital entered 2019 optimistic on US stocks and that thinking holds. However, we wouldn’t be surprised if equities struggled in September.

While October seems to get all the credit (if that’s the right word) for being the spookiest market month of the year – think the ‘29 Crash, the ‘87 Crash, and Halloween – September has historically been the  worst month for US equity returns. From 1928 through 2017 the S&P 500 has lost an average of 1% in September, and since 1948 the index has produced a positive return in September just 44% of the time (the lowest percentage of any month). 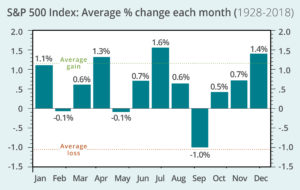 No one knows why September has proven to be such a difficult stretch for stocks, though the month lands in the seasonally weak May to October period (“Sell In May And Go Away”). Catalysts for September weakness this year include US/China trade relations, monetary policy (will the Federal Reserve disappoint the market when it meets later this month?), and European politics (the latest – and possibly final – Brexit deadline is fast approaching and political instability in Italy will likely exacerbate that country’s increasingly tenuous relationship with the EU).

Market drawdowns are never fun, but they happen and often serve a productive purpose, including improving valuation and tamping down overly optimistic investor sentiment. As long as monetary policy, fiscal policy, and economic fundamentals are broadly supportive of risk assets (as they are today), drawdowns should be taken in stride and viewed as potential buying opportunities.

U.S. equities rose for a second consecutive week, with the S&P 500 Index advancing close to 2%. The signing of the U.S./China phase-one trade deal and the ratification of the USMCA trade agreement seems to have removed some significant trade-related risks from the market. Investors also reacted positivity to the start of fourth quarter earnings season, which produced mixed, but still-solid, results. Large caps and more defensive areas of the market led the way last week, with only the energy sector ending in negative territory.

U.S. economic data surprised to the upside in December with strong employment and growth results and the Fed remained on hold as expected. Progress on tariffs and U.K. election results lowered geopolitical noise for the time being. These developments led to continued improvement in risk sentiment.

Against the backdrop of a continuing bull market in equities, investor uncertainty has increased with a number of key economic and geopolitical risks, resulting in rising market volatility.

Investors have logically sought to de-risk* portfolios, and given the low interest rate environment, they have rotated significant amounts of money into defensive equities, resulting in stretched valuations for certain pockets of these stocks. At the same time, equity upside remains attractive as accommodative policy and the potential for trade resolution between the U.S. and China could support future gains. As a result, investors now face three competing objectives: how to de-risk portfolios, without overpaying for defensive equities, while maintaining equity upside.