Market Insights
Market Outlooks
Print
Download
Share
report by Brinker Capital
This piece is approved to use with clients.

Weekly Wire: The Coronavirus: History may not repeat, but it does rhyme

By their nature, exogenous shocks are impossible to model for – we simply don’t know when to expect  the unexpected. As exogenous shocks occur, investors will understandably seek to discern their ultimate  impact on the economy and the stock market. Looking back through history its probably the most  effective way of putting unfolding geopolitical events in context. As they say, if history doesn’t repeat, it does rhyme. And so it goes with the coronavirus.

While we do not want to look past the human toll the coronavirus has taken, clearly, it is top of mind for  many investors who are concerned it will derail our record-long economic expansion and bull market.  While our crystal ball is as foggy as the next, we are optimistic the virus will be contained and, beyond  weighing on investor sentiment and markets near term, will have no lasting impact on the markets and  the economy. The reference point for that prognostication is our experience with the 2003 outbreak of Severe Acute Respiratory Syndrome – better known as SARS – which also originated in China and was  also a coronavirus (so named for the crown-like spikes on their surfaces). From its identification in  February 2003 until it was stopped in July 2003, SARS sickened 8,100 people in 29 countries and caused  774 deaths. By comparison, the coronavirus has sickened approximately 2,700 people in more than a dozen countries and caused 80 deaths. 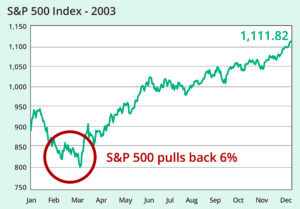 While the discovery of SARS was a catalyst for a 6% market pullback in early 2003, the S&P 500 Index was up 27% that year, as the virus was contained and investors  pivoted back to a US economy that continued on a slow but steady recovery from the recession of 2001. This point is worth emphasizing – fortunately, our worst fears are rarely realized, with  most geopolitical risks flaring up and fading away. With that said, we are also reminded of the  importance of keeping our focus on what ultimately drives risk assets: fiscal policy, monetary policy, and economic fundamentals. On that front, we see more good news than bad, and as such, we remain both optimistic and overweight risk.

What’s Next for Europe?

video by Northern Trust Asset Management
This piece is approved to use with clients.

The European Union’s future and its role in the world is in the spotlight. Can it survive, and maybe even thrive, in a multipolar world? Our Chief Investment Strategist EMEA & APAC, Wouter Sturkenboom, explores the issue.