A mid-year slowdown has not yet appeared in the global economy or equity markets. But we have seen a notable drop in interest rates, which is curious in the face of hotter-than-expected inflation reports. As shown below, rates have fallen steadily since a peak at the end of the first quarter, for reasons we think are as much technical as fundamental. Risk markets have handled the decline reasonably well, but it has led to a return of growth stock outperformance. With U.S. interest rates declining to the bottom end of our expected range, we did reduce interest rate sensitivity in our global policy model this month by reducing our investment grade fixed income allocation. Meanwhile, we also modestly reduced our emerging market equity exposure, partly due to the high-profile changes in economic and regulatory policy in China.

Inflation data is so varied that one can find a report to support any outlook. Recent U.S. inflation reports have been much hotter than expected, but Europe and China reports been much more subdued. Goods and services tied to the reopening have led price gains and there are some signs of normalization. Lumber prices have fallen 64% from their peak, now below their pre-pandemic high. Used car prices — a major contributor to the recent inflation spike — have now started to decline in the auto auction markets, portending less pricing pressures ahead. In some important respects, inflation only really matters to financial markets if it leads to a jump in interest rates or decline in corporate margins. So far, we haven’t seen those negative consequences.

China’s economy held up better than the West during 2020 and has slowed this year as policymakers have worked to reduce risks in the financial system. A pivot may be underway, as monetary policy looks to become less restrictive. Additionally, China’s economy remains highly leveraged to global growth. This is exemplified by the acceleration in Chinese export growth to 32% in June, while imports slowed to a still impressive 37% growth rate. Less well-received by the markets has been Chinese regulatory policy, including regulation of technology leaders and highly leveraged development companies. We expect these actions to be an anchor on valuations.

The Federal Reserve recently updated its dot plot, a communication tool for where policymakers believe the Fed funds rates will be in the future. The dot plot showed 13 of 18 governors predict two rate hikes by the end of 2023. This is more hawkish than the previous dot plot in which only seven governors signaled two hikes by the end of 2023. With that said, Chairman Jerome Powell noted that the dot plot should be taken with “a big grain of salt.”

We echo Powell’s views and believe investors should expect the Fed to stay on hold. Looking at the forward rate curves, investors seem to align more with the dots than the chairman. Based on the 3-month T-bill yield two years forward, the market is pricing in three hikes by the end of 2023. Since the financial crisis, the market has consistently expected more hikes than what actually materializes. Recognizing that the nature of the pandemic is different than the 2008 crisis, current Fed funds rate expectations show that — once again — markets are seemingly over-optimistic about what the Fed can achieve. Time (and economic data) will tell if this optimism is warranted, but for now we are fading the hype. We remain long duration versus peers, but do expect the 10-year Treasury yield to move back towards 1.5%. 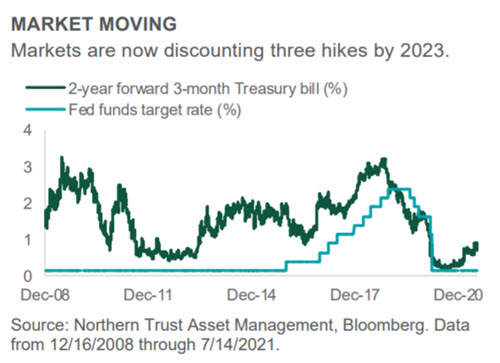 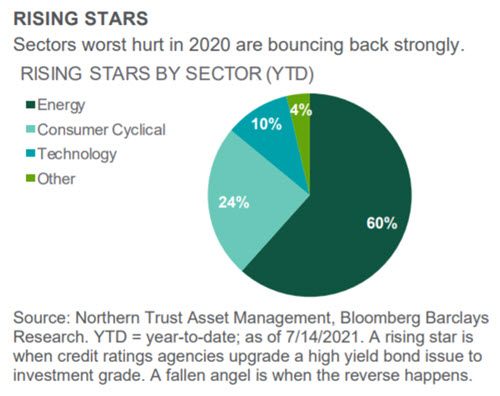 Global equity markets continued to rally over the past month and were up another 1.6%. However, there was a notable divergence between regions with almost all of the return coming from the U.S. At 2.9% for the month, U.S. equities did much better than European equities (0.4%) and emerging market equities (-1.5%). In the U.S., a strong corporate earnings outlook and a further decline in interest rates fueled strong returns in growth sectors. Europe, with its larger exposure to cyclical sectors could not keep up, and worries around the spread of the COVID-19 Delta variant did not help. Emerging markets’ negative return can be largely attributed to renewed regulatory pressures from the Chinese government after the Didi initial public offering.

With respect to the cyclical trade reversal, value stocks underperformed growth stocks by about 6% — continuing the change in leadership experienced since May. Cyclical sectors drove early-year market returns, while growth sectors have contributed the bulk of the subsequent gains. Recent performance has led the valuation gap between growth and value to widen further. We certainly don’t expect  “value” and “growth” valuation levels to reach par (definitionally impossible), but from here they will likely converge some during the ongoing economic recovery. 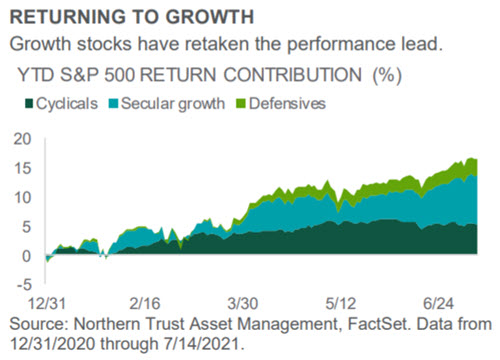 We often discuss the interest rate sensitivity found in both global real estate (GRE) and global listed infrastructure (GLI). With the 10-year U.S. Treasury yield falling from 1.75% at the end of the first quarter to a current level of 1.3%, we have a contemporary analysis of that empirical observation. In this most recent trial, it appears GRE provides the better term (interest rate risk) exposure — outperforming global equities by 2.6% (11.1% total return) while GLI lagged by 4.9% (3.7% total return). That said, other elements were also at play — including the ongoing reopening trade that likely provided further boost to GRE.

Looking ahead, we are sticking to our positioning with a tactical overweight to GLI and strategic weighting to GRE. Just as GLI has not shown as much term exposure in the recent downward trend in rates, GLI should not suffer should rates revert modestly higher (see Interest Rates section). We also like the protection GLI provides against our risk case of inflation and the likely better performance of GLI if the reopening trade slows due to Delta variant concerns. Lastly, we continue to like global natural resources as a play on constrained supply during the global reopening, with an added benefit of inflation protection. 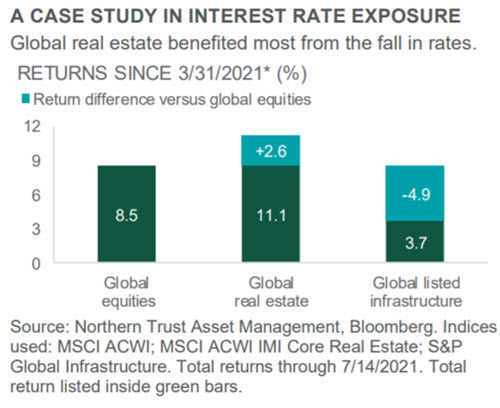 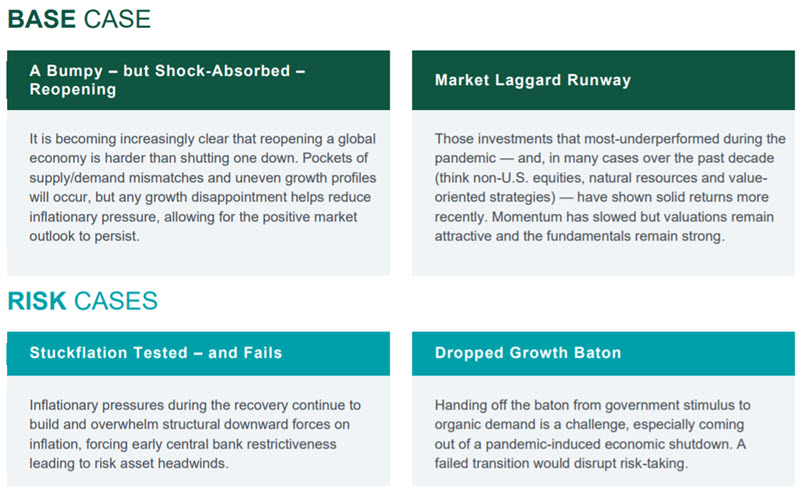 LIBOR is phasing out. What does that mean for investors?

The transition is a dynamic process that requires careful planning, resources and focus.

Weekly Market Compass: What to watch this week: The FOMC and Evergrande