The 2023 fiscal year will start July 1 with states well-positioned due to record fiscal year 2022 revenues and accumulated reserves, as well as federal aid. However, states should begin normalizing spending in the coming year, particularly in light of potential equity market losses, inflation-related rising costs, anticipated slower growth and the absence of new extraordinary federal stimulus. The vast majority of states have prepared to manage this transition with continued resiliency (see Exhibit 1), supporting a stable credit outlook for $375+ billion of state-issued municipal bonds. 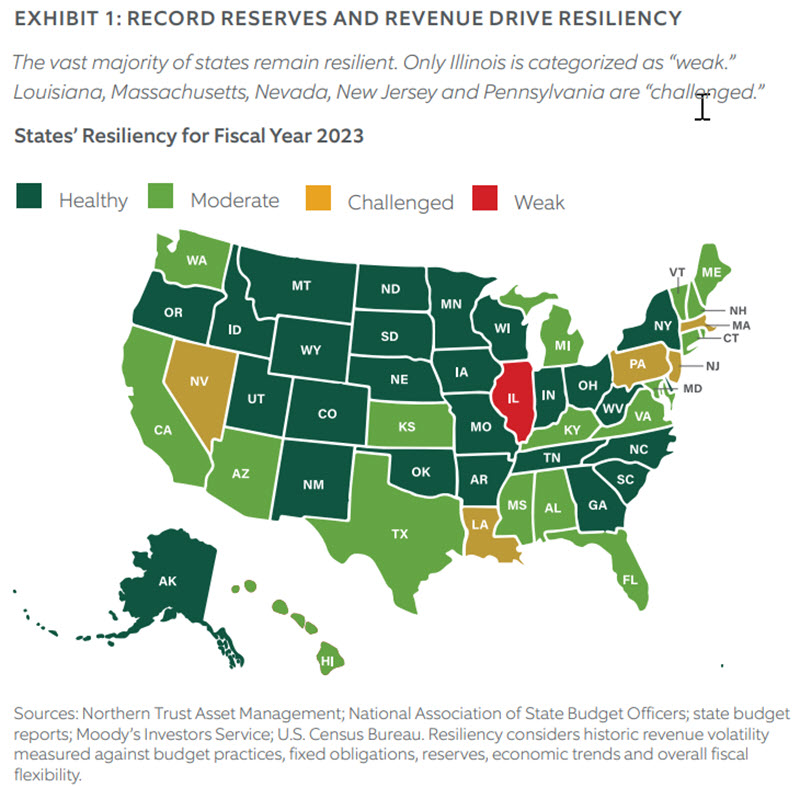 Generally, states expect balanced budgets for the fiscal year 2023, despite likely moderating economic growth. Many states are budgeting for flat to modest revenue growth, with some calling for a pullback from fiscal year 2022’s record tax collections — particularly in corporate taxes.

The National Association of State Budget Officers Annual Survey reports projected 2023 revenue growth at a median 1.4% versus 2022. This is composed of 6% growth in personal income tax, less than 1% growth in sales tax and significant weakness in corporate tax collections, down 11% with expected lower profits. States will continue to use federal pandemic aid (see Exhibit 2). 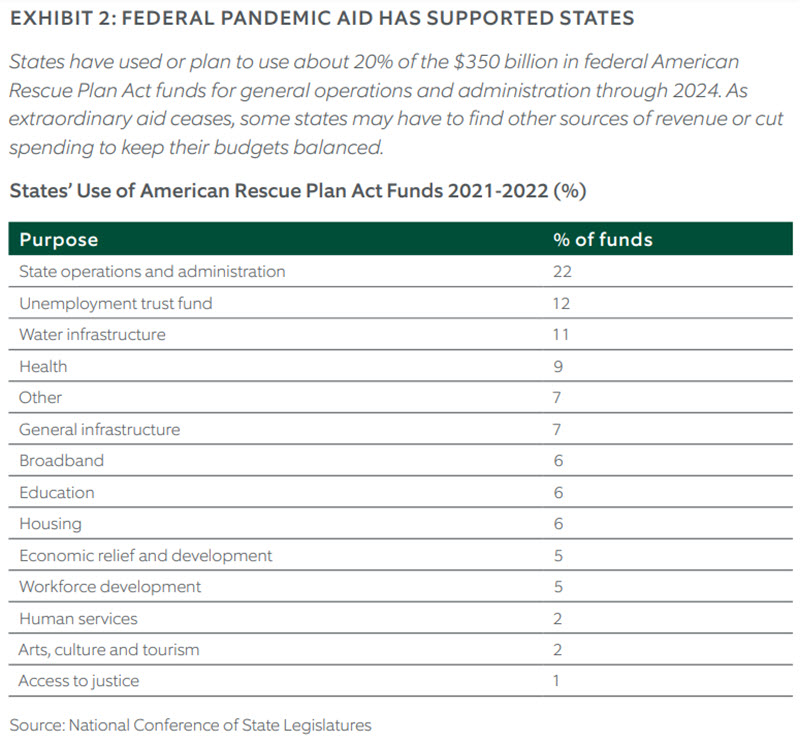 A POTENTIALLY DIFFICULT TRANSITION ON THE HORIZON

Record reserves and unspent federal aid have made states more resilient than in the past. However, federal pandemic aid will dry up eventually. To adjust, we believe some states will need to cut spending or find alternative funding sources. These states — including California, Pennsylvania and Illinois — already tend to have above-average tax rates, making tax increases a more challenging option to generate additional revenue.

Some states will need to adjust to moderating revenue growth from lower capital gains taxes and moderating corporate profits. This is particularly true in states such as California or New York, which depend more on that kind of economically sensitive tax revenue. Further, some states with higher tax rates are seeing net out-migration from residents, which may, over the long-term, challenge their ability to maintain current levels of taxation. Migration from higher tax states to lower tax states accelerated during the pandemic, although taxes haven’t been identified as a key reason for moving. 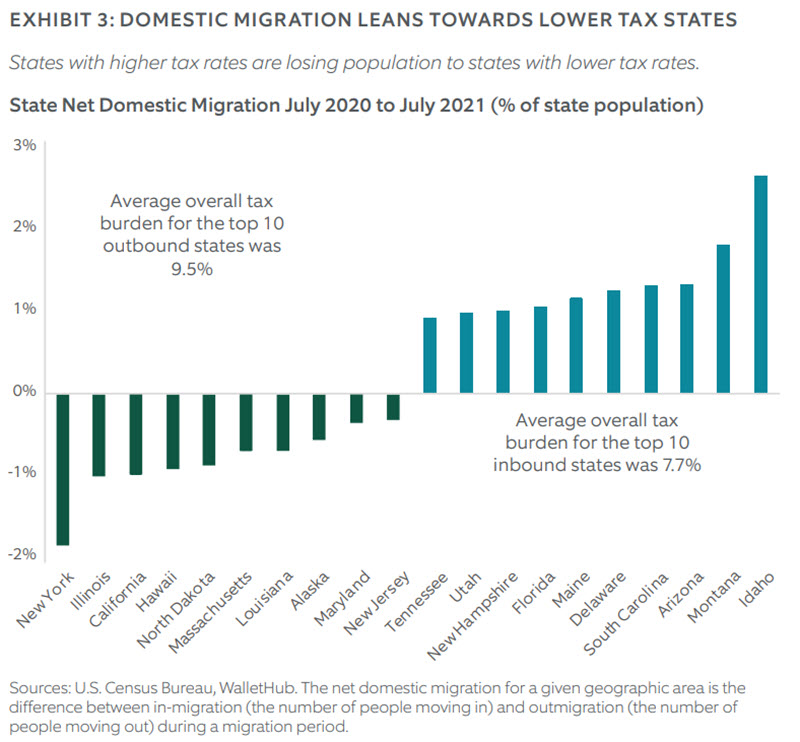 WHAT THIS MEANS FOR MUNICIPAL BOND INVESTORS

The vast majority of states enter fiscal year 2023 stronger than before the pandemic. They are well-positioned to meet their debt obligations, building a positive foundation for state-issued municipal bonds. However, the normalization of fiscal operations may eventually create problems for some states.

For Asia-Pacific markets, this information is directed to institutional, professional and wholesale clients or investors only and should not be relied upon by retail clients or investors. The information is not intended for distribution or use by any person in any jurisdiction where such distribution would be contrary to local law or regulation. Northern Trust and its affiliates may have positions in and may effect transactions in the markets, contracts and related investments different than described in this information. This information is obtained from sources believed to be reliable, and its accuracy and completeness are not guaranteed. Information does not constitute a recommendation of any investment strategy, is not intended as investment advice and does not take into account all the circumstances of each investor. Opinions and forecasts discussed are those of the author, do not necessarily reflect the views of Northern Trust and are subject to change without notice.

Forward-looking statements and assumptions are Northern Trust’s current estimates or expectations of future events or future results based upon proprietary research and should not be construed as an estimate or promise of results that a portfolio may achieve. Actual results could differ materially from the results indicated by this information.

Access our most comprehensive quarterly report on fixed income flows and holdings, including timely SPDR® ETF implementation ideas to position for the volatility and uncertainty that has gripped the bond market.