Market Insights
Market Outlooks
Print
Share
article by ClearBridge Investments
This piece is approved to use with clients.

Economy and Markets Continue to Defy Wall of Worry

With fall upon us, change is in the air. The days are getting shorter, the mornings chillier, and back-to-school has arrived. However, the more things change, they more they stay the same. The ClearBridge Recession Risk Dashboard continues to emanate an overall green expansionary signal, with no changes this month meaning all 12 underlying indicators remain green. In fact, more signals saw improvement beneath the surface than deterioration over the last month, meaning the overall reading continues to improve from a very strong starting point. 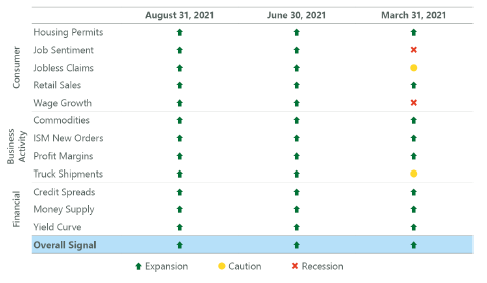 Another thing that hasn’t changed is market and macro fear and risk. Some market observers are worried about an economic soft patch in the coming months. This week expanded unemployment insurance (UI) benefits expire in the remaining 25 states that did not opt out early, impacting about 11 million individuals. Further, the rise in COVID-19 cases from the spread of the Delta variant has caused some individuals to retrench. This is evident in recent data with Retail Sales widely missing expectations although year-over-year (YoY) growth – which the dashboard focuses on – remains quite robust at +15.8%.

Another example is consumer confidence, which has plunged over the last two months. The dashboard’s Job Sentiment metric utilizes data contained within the Conference Board survey, specifically the differential between jobs “plentiful” and jobs “hard to get” responses, which held up much better, declining a meager 1.3 points from last month’s two-decade high. Importantly, the rapid decline in the headline metric could prove to be a contra-indicator. When consumer confidence has historically seen a decline equivalent or worse than the -15.1 points seen over the last two months, the S&P 500 Index has delivered a 12.9% return over the subsequent year. When looking at the six non-recessionary periods only – likely a more appropriate comparison given current economic conditions – the return is an even stronger 16.5% with all six periods delivering positive returns. Similarly encouraging is the rebound in the weekly Consumer Comfort Index which printed a new post-pandemic high last week. 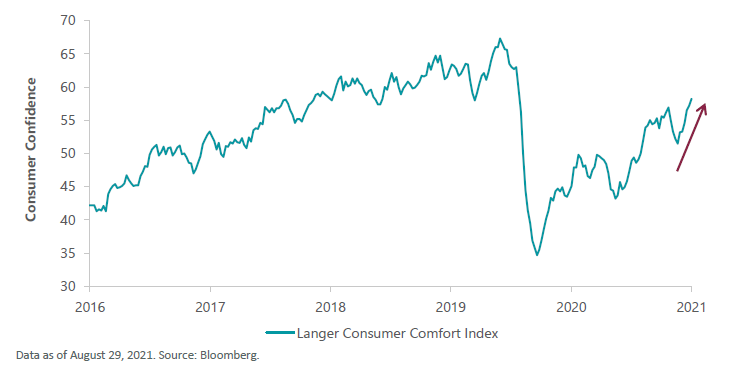 There are additional reasons to be optimistic as we move toward fall. The recent ISM Manufacturing release was very strong, with both the headline and New Orders (a dashboard component) beating expectations and accelerating from the prior month. Moreover, the prices paid subcomponent missed expectations and decelerated, a positive development that suggests inflation should continue to ease in the coming months and into 2022. While supply chain issues continue to persist, a bright spot is South Korean semiconductor exports which are up 40% YoY and 47% compared to August 2019 levels.

Furthermore, the backdrop of rising wages, increasing COVID-19 vaccination rates, and the aforementioned UI benefit expiration should support an increasing labor pool into fall despite last week’s jobs report miss. With a record 10 million job openings, labor supply appears to be the primary challenge currently facing the labor market, and the pool should expand as schools reopen given the higher rates of labor force exits among mothers in particular.

The jobs report miss was largely driven by weakness in the leisure and hospitality sector which gained zero jobs after averaging +284,000/month over the prior six months. This sector is particularly sensitive to COVID-19, making the peak in Delta particularly important. In fact, 400,000 additional workers reported they were “unable to work because their employer closed or lost business due to the pandemic” in August (5.6 million) relative to July (5.2 million) per the Bureau of Labor Statistics household survey supplemental data. Case counts appear to be growing at a slower pace and could peak soon – if the U.S. follows a similar trajectory to India and the U.K. – which would support a rebound in hiring.

The rapidly changing landscape in job creation means that the Federal Reserve’s “substantial further progress” barometer for the labor market has not yet been met. This development could push back the effective liftoff date for the upcoming tightening cycle (beginning with the tapering of quantitative easing). In the near term, this sets up the potential for a goldilocks scenario for equity investors with the Fed on hold for a bit longer and a possible economic reacceleration when Delta subsides. Even when the Fed eventually does begin to renormalize monetary policy away from extraordinary crisis measures, their overall stance will still remain quite accommodative, continuing to support the current bull market. The more things change, the more they stay the same.

Definitions
The ClearBridge Recession Risk Dashboard is a group of 12 indicators that examine the health of the U.S. economy and the likelihood of a downturn.
The S&P 500 Index is an unmanaged index of 500 stocks that is generally representative of the performance of larger companies in the U.S.
The Institute for Supply Management (ISM) is an association representing more than 48,000 purchasing and supply management professionals. It conducts regular surveys of purchasing and supply managers to determine industry trends.

The investment, risk and business activities executed by RIAs across the nation.

We believe that even in times of economic uncertainty, real estate continues to deliver opportunity to investors. While the real estate market continues to evolve, nimble, experienced investors are finding new ways to generate returns.