Portfolio Construction
Sustainable Investing
Print
Share
article by Janus Henderson Investors
This piece is approved to use with clients.

“When man continues to destroy nature, he saws the very branch on which he sits since the rational protection of nature is at the same time the protection of mankind.”

In 1959, Gerald Durrell founded Jersey Zoo on the largest of the Channel Islands between England and France. His pioneering work and mission to save species from extinction continues through the Durrell Wildlife Conservation Trust (“Durrell”), one of the world’s leading conservation charities. Durrell has trained 5,000 conservationists from 142 countries around the world and the work of Durrell’s conservation scientists has led 18% of avoided species extinctions. Humanitarian and social work is integral to conservation work, and all of Durrell’s programs contain social aspects because conservation cannot be successful without the support of local communities.

Janus Henderson is a supporter of Durrell and we have made donations towards Durrell’s conservation efforts. In 2021, we funded efforts to protect Madagascar’s ploughshare tortoise, the world’s most threatened tortoise. Conservation success is measured over many years, and when Durrell commits to a project, it is for the long term. As a result, we plan to make annual donations to Durrell going forward.

To benefit from the expertise and insight at Durrell, Janus Henderson arranged a two-day research trip to learn about the conservation work undertaken, the challenges that biodiversity loss poses and the role of finance in protecting nature. Members of our Global Sustainable Equities, Global Natural Resources, Global Technology Leaders, UK Responsible Income, and Environmental, Social and Governance (ESG) Investment teams spent time extending their understanding of biodiversity loss and the role of investors in addressing the challenge.

The first day focused on the scale of biodiversity loss and ecosystem degradation, and the need for global conservation policies. Globally, one million plant and animal species are at risk of extinction1 and animal populations worldwide have declined nearly 70% in just 50 years.2 This poses a tragedy for humanity.3 Nature provides intrinsic benefits in the form of individual, community and societal wellbeing, but it also carries enormous extrinsic financial benefits. More than half of the world’s total GDP, or $44 trillion, involves activities that are moderately or highly dependent on nature, according to the World Economic Forum.4

Furthermore, biodiversity loss and climate change interact in profound ways and are ultimately two sides of the same coin. By working to protect biodiversity, we are protecting ecosystems and, ultimately, the climate.

Yet, key species are disappearing worldwide, and ecosystems are collapsing in front of our eyes. A healthy ecosystem is like a Jenga tower where individual blocks represent different species. Ecosystems, like Jenga towers, are initially robust – if a few species (blocks) are removed, the system still operates. But if too many species disappear, the whole structure collapses.

We discussed various human activities that have driven many species to extinction, particularly through climate change, land use and pollution. The impact of human activity extends to the most isolated parts of the Earth. Albatross on the extremely remote Midway Atoll island in the Pacific Ocean are dying in huge numbers due to ingested plastic. One study estimates that by 2050, 99% of seabirds will likely have undigestible pieces of plastic trash in their bellies.5 Microplastics from tires, clothing and other products are also entering food chains in waters across the globe, causing potential harm to human health.6

Many of the purchasing decisions of consumers in the West and China are driving deforestation and the exploitation of species in tropical rainforests and other parts of the world. An example is the huge demand for rosewood among Chinese consumers, which has led to unsustainable deforestation in Madagascar.7

Yet governments are failing to act. An estimated $1 trillion of public money is spent on subsidies to economic sectors that harm biodiversity – five times the amount spent on protecting nature.8 Durrell is focused on raising awareness of these worrying trends in order to change attitudes and behaviors. However, the money needed to fund conservation efforts is woefully inadequate.

These themes were brought to life with case studies from around the world, highlighting some of the most ecologically important areas in the world – South-East Asia, Brazil and Madagascar – where Durrell is most active:

The second day focused on the role of the financial sector in addressing nature-related risks and opportunities. Andrew Mitchell, a leading thinker on sustainability and Vice Chair of the Taskforce on Nature-related Financial Disclosures (TNFD), explained the critical importance of negative externalities, where the production or consumption of a good is not factored into its price and results in a cost to a third party. Traditional economics has failed to consider the cost we all bear for biodiversity loss, climate change, pollution, and other environmental impacts.

The TNFD aims to support a shift in global financial flows into nature-positive outcomes by creating a risk and disclosure framework for companies to adhere to, akin to the Task Force on Climate-Related Financial Disclosures (TCFD) for climate risks. The Framework was launched in June 2021 with 35 representatives from finance and the corporate sector feeding into the evolving framework. JHI has also joined as a TNFD Forum member. The final version of the TNFD framework is due to be published toward the end of 2023 and, if it follows a similar path to TCFD, we could expect biodiversity-related reporting requirements for companies, investors and asset owners within a few years.

The concept of materiality is relevant for discussions on nature-related risks. Traditionally, materiality referred to issues that are financially relevant for a company or a sector to consider. Biodiversity loss is particularly relevant for food producers, for example, as it could affect food yields. Double materiality extends this concept and states that companies should also manage the current and potential adverse impacts of their decisions on people and the environment. Dynamic materiality further recognizes that issues can become financially material over time, so what appears financially immaterial today can quickly prove to be business-critical tomorrow – as with the COVID-19 pandemic, for example. The TNFD builds on the concept of “evolving materiality,” which is a combination of double and dynamic materiality.

Various biodiversity approaches and metrics were discussed, including the TNFD’s Locate, Evaluate, Assess and Prepare (LEAP) methodology, the International Union for Conservation of Nature’s (IUCN’s) Species Threat, Abatement and Recovery (STAR) metric, and the Corporate Biodiversity Footprint (CBF) from Iceberg Data Lab, a fintech company. Standardized biodiversity data, methodologies and metrics are still evolving, underlining the importance of staying on the cutting edge of developments on biodiversity risks. As a TNFD Forum member, JHI supports the development of more accurate biodiversity data and metrics.

In between desk-based work, the team had an opportunity to spend time in the zoo with orangutans, macaques, tamarins, giant tortoises, poison dart frogs, hornbills and pink pigeons, among others. This is where the teachings came to life. While we have previously written about biodiversity loss, seeing and hearing these wonderful and unique animals brought the crisis into sharp focus, just as hearing about the extraordinary efforts conservationists are making to save endangered species humbled us.

To Value or Not to Value

The course concluded with an outdoor discussion of the benefits and drawbacks of assigning a value to nature, with various arguments proposed on both sides. Assigning an economic value to nature speaks the language of those in power. To drive nature-positive change, we must convince decision-makers in government and business to fully understand and appreciate our dependencies and impact on nature. This would enable a more accurate appreciation of the systemic threats that biodiversity loss and ecosystem damage pose. Relevant metrics and targets can then be set that align with the restoration of ecosystems that we depend on.

Indeed, this is the conclusion of the Dasgupta Review, a UK government-commissioned report, which calls for the development of new accounting systems that measure biodiversity and climate in country and company balance sheets. The Dasgupta Review states that we should replace GDP growth with a measure of “inclusive wealth” that considers natural capital, human capital and produced capital, with an emphasis that natural capital should be protected and increased over time.

Yet, to others, reducing nature’s beauty and value to a series of numbers feels insufficient. The value to our wellbeing of a walk through a meadow, the sound of birdsong or the smell of fragrant honeysuckle is inestimable, like the feeling of being in love or achieving a life-long goal. Yet, we fail to appreciate nature in a world in which we are increasingly distanced from it, living much of our lives virtually on screens and within concrete, steel and glass boundaries.

We wondered if this explains why humanity has systematically underestimated the value of nature. Those few voices that have rallied against species and habitat destruction have been drowned out by the incessant march of economic progress, the rise of technology, and the unrelenting commodification of goods and services. The protection of nature and the need for a circular, sustainable economy has taken a back seat in favor of ever-expanding GDP growth. Gerald Durrell once said:

“Animals and plants have nobody to speak for them except us, the human beings who share the world with them.”

As we reflected on our time at Durrell in the afternoon sun amid the calls of a rich array of beguiling (but endangered) species, everyone agreed. Armed with new knowledge and new tools, we all felt empowered to contribute to nature’s protection and restoration in the best interests of our planet. 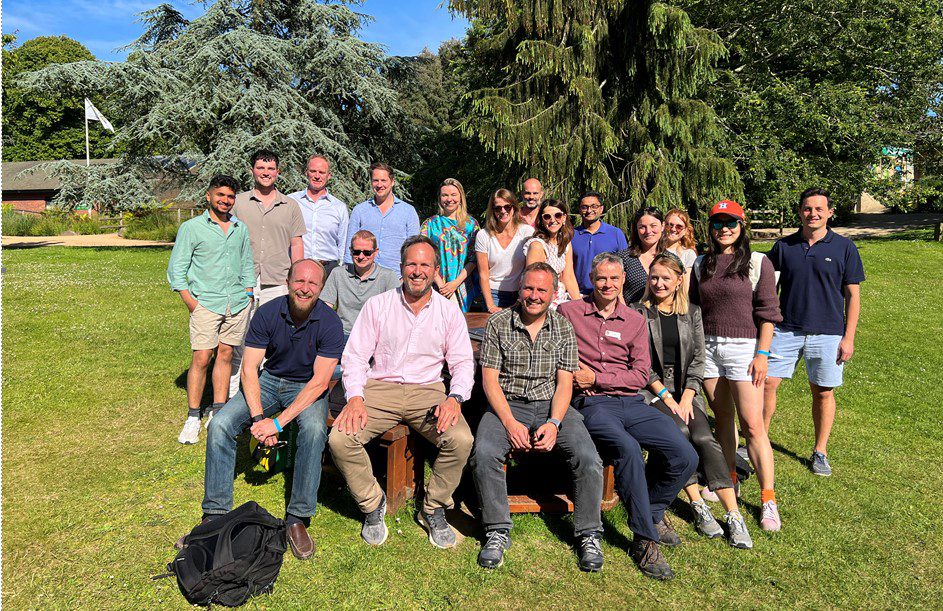 Environmental, Social and Governance (ESG) or sustainable investing considers factors beyond traditional financial analysis. This may limit available investments and cause performance and exposures to differ from, and potentially be more concentrated in certain areas than, the broader market.

Use of third-party names, marks or logos is purely for illustrative purposes and does not imply any association between any third party and Janus Henderson Investors, nor any endorsement or recommendation by or of any third party. Unless stated otherwise, trademarks are the exclusive property of their respective owners.

We’ve identified five key steps for investment committees to get started on adopting sustainability into their portfolios.

The Cost of Climate Change

article by William Blair
This piece is approved to use with clients.

Is there a cost to climate change? Clearly so, and it’s impacting the profitability of companies in which we seek to invest.

MarketScape: Is Regulation a Tailwind for Greater ESG Adoption?

Growing investor interest in environmental, social and governance (ESG) investing has exposed gaps in the quality and comparability of ESG disclosures.