The rapid fall from grace for EM equities this year has revealed how quickly investor sentiment can turn. Whereas the dominant theme at the start of the year was the region’s relatively good COVID-19 experience, the regulatory shift in China triggered a major reappraisal of the outlook. Even for an asset class with a well-documented history of elevated volatility, this has been a stark reversal of fortune. Investors are now trying to navigate particularly treacherous cross-currents, mindful of how we got here while staying focused on the future. Our stance remains neutral as we balance policy uncertainty in China against increasingly attractive valuations.

The cross-currents investors are navigating can be roughly divided into a growth outlook, regulatory outlook and valuation outlook. From the outset it should be clear that China plays a big role in all three components. As an engine for global growth its economic outlook reverberates worldwide and its regulatory tightening has been dominating the news. It is also by far the dominant country in the EM index with a weight of roughly 35%, while it has a big impact on the rest of the EM Asia region which represents an additional 44% of the EM index. In comparison, Latin America and EMEA are relatively small regions with weights of 8% and 13%, respectively. We will therefore pay significant attention to China throughout this report, starting with its impact on EM equity performance.

The scale and source of the impact China has had on the performance of the EM equity index becomes clear in Exhibit 2. The right-hand panel shows how half of the index’s underperformance can be attributed to China alone, while the left-hand panel shows the big declines in the large consumer, communication and IT companies that dominate China’s equity market. The regulatory tightening has likely been a driving force of market performance.

On the growth front investors are grappling with the impact of a global surge in COVID-19 cases due to the spread of the Delta variant and the deceleration of China’s economy. The main worry on COVID-19 is that a lot of developing countries have not yet been able to vaccinate a significant percentage of their adult population, and their economies are therefore more exposed to the pandemic. A secondary worry is that higher case numbers in the developed world might result in voluntary cutbacks from consumers, slowing the global economic recovery. On both counts, we are more optimistic than the consensus.

Although it is undoubtedly true that the developing world still has a long way to go in terms of vaccinations, the progress they did make was enough to vaccinate the majority of their most vulnerable people. This allowed them to keep their economies largely open during the latest surge, which in the majority of countries peaked over a month ago. Any COVID-19 related weakness is likely expected to fade in the months ahead. The worry that consumers in the developed world will voluntarily cut back on spending looks overdone to us. There will be pockets where the recovery will experience a setback, like international travel and indoor dining, but we don’t expect that to last very long as we don’t foresee governments putting new restrictions or lockdowns in place. The global economic recovery will most likely not be derailed.

With respect to the deceleration of China’s economy the worries of investors are more understandable, although here too we are more optimistic than the consensus. The combination of slowing real activity data with a modestly tight fiscal policy stance has caused China’s economy to transition quicker than expected from recovery to organic growth. This comes as a small disappointment to investors, but it doesn’t really change the outlook for future growth. That outlook is still dependent on the combined fiscal and monetary stance, global growth and sentiment. On the fiscal policy front the latest indication from the Politburo is that it recognizes growth is slowing and it is time to take the foot off the fiscal policy brake. Monetary policy has also transitioned towards providing incremental stimulus, although this hasn’t yet boosted money or credit growth. Combined with robust global growth and moderately optimistic sentiment among consumers and producers, the outlook for growth is unexciting but robust.

A factor that could potentially derail the growth outlook is if China’s regulatory tightening triggers a downward spiral in investor sentiment which subsequently spreads to the real economy. To assess that risk, we have to take a closer look at what the Chinese government is trying to achieve, and delineate what its preferences and constraints are.

When China’s political leaders started talking about ‘common prosperity’ earlier this year it was uncertain what they were focused on exactly. Since then, it has become clear the government is concerned that rising income and wealth inequality combined with falling social mobility is a risk to social stability (see Exhibit 3), which the government knows translates directly to political support. In response, the government has been taking regulatory action to improve the quality of life for the middle class, lower the risk to financial stability and reign in what it considers corporate overreach (see Exhibit 3).

This is a big change. Previously, the government had a much more narrow focus on pollution, excessive financial leverage and corruption. Now it has stopped IPOs, targeted the private education sector and the gaming industry and issued a new strict data privacy law. As far as its preferences go, it is clear the direction the Chinese government wants to go, the difficulty is assessing exactly when and how quickly it will move. 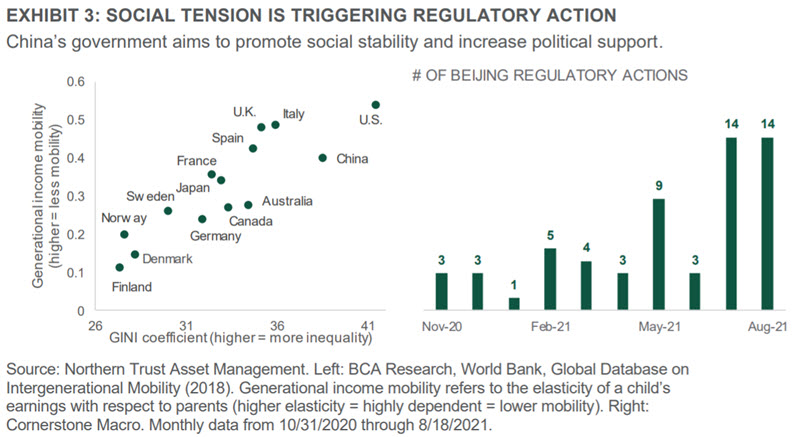 The most important constraint the Chinese government faces in implementing reforms is that it needs to maintain stability, which means maintaining economic growth. That implies there is a pain threshold where the government’s tolerance for short-term pain in exchange for long-term gain is exceeded. A sell-off in equity markets alone is not enough to reach that threshold, but we think it will be if combined with a slowdown in real activity and sustained investment outflows. So far, the pain of the regulatory tightening has been mostly felt in equity markets, with both currency and fixed income markets remaining relatively stable. As a rough indicator of sustained investment outflows that means we might not be at the end of this episode yet. However, with an eye towards the winter Olympics in early 2022 we do think we are getting close.

Another constraint on the Chinese government is its wish to become a global force in financial markets. It has been opening up its equity and fixed income markets to foreign investors and is turning the renminbi into an internationally liquid currency that vies for reserve currency status. To continue on this road and solidify the gains it has made, the Chinese government must show to investors it can be trusted to adhere to global rules, or they will shy away. Those rules include regulatory tightening, and if the Chinese government is seen as overstepping the mark it will have consequences. Already, government officials have started to talk to global investors to inform them of their intent as well as discuss the current environment. That is a small step, but an important one.

Overall, we are monitoring the situation closely for signals from the Chinese government that it is willing to loosen the regulatory reins, as well as whether it is taking fiscal and monetary policy action to support the economy. The announcement from China’s central bank that it wants to increase support for smaller businesses is another small step in the right direction. For now, however, we expect uncertainty will remain elevated which means investors will continue to demand a higher risk premium to invest in China.

When determining the valuation outlook for EM equities we take into account absolute and relative attractiveness. Ideally, both line up to give us a clear signal if valuations are acting as a tailwind or a headwind to the outlook, and by extension whether risks are elevated (if valuations are rich) or diminished (when valuations are cheap). However, it is important to note up front that valuations provide very unreliable signals on a one-year tactical time horizon. Their real added benefit comes from their signals on a five-year strategic time horizon. Still, even tactically it is important to monitor the valuation outlook to scan for risk signals and to monitor trends.

In absolute terms, the return expectation for EM equities on one-year and five-year time horizon is solid. Even the global backdrop of above average price-earnings multiples is not having a negative impact on future expectations because EM equity multiples are very close to neutral. This is due to the weak price action in EM equities, which has had a bigger impact than the fall in corporate earnings growth expectations as seen in Exhibit 4 (lower earnings all else equal push valuations higher). In relative terms, EM equity valuations are outright attractive. Exhibit 4 shows that EM equities are trading far below their ten-year average in terms of relative valuation to developed market equities. This is shining through in higher return expectations.

The outlook for EM equities at a time of exceptionally strong cross-currents is difficult to assess. Attractive valuations are inviting us to go overweight, but we are aware that at least some of that attractiveness needs to be balanced against the necessity of a higher risk premium. The impact of the regulatory tightening is ostensibly not yet so severe as to cross the Chinese government’s pain threshold, so uncertainty and risk remains elevated. That means we are preferring to stay neutral while we monitor the actions and communications by the Chinese government, as well as the movements in Chinese fixed income and currency markets.

Wouter Sturkenboom, CFA, CAIA, is chief investment strategist for EMEA and APAC at Northern Trust. He is also a member of the Interest Rate Strategy Committee and Investment Policy Committee.

IMPORTANT INFORMATION. For Asia-Pacific markets, this information is directed to institutional, professional and wholesale clients or investors only and should not be relied upon by retail clients or investors. The information is not intended for distribution or use by any person in any jurisdiction where such distribution would be contrary to local law or regulation. Northern Trust and its affiliates may have positions in and may effect transactions in the markets, contracts and related investments different than described in this information. This information is obtained from sources believed to be reliable, and its accuracy and completeness are not guaranteed. Information does not constitute a recommendation of any investment strategy, is not intended as investment advice and does not take into account all the circumstances of each investor. Opinions and forecasts discussed are those of the author, do not necessarily reflect the views of Northern Trust and are subject to change without notice.

What’s More Concerning Than Too Much Inflation?

Investors are rightly concerned about the recent level and persistency of inflation, which, depending on what metric one uses to measure it, is running at 4% to 5% year over year.

Prices have climbed around the world, with commodities prices surging and U.S. inflation hitting a 13-year high.