Inflation, along with the second order negative impact on growth, remain top of mind for markets. The U.S. June Consumer Price Index (CPI) print of 9.1% year-over-year (y/y) was the second consecutive negative surprise. As shown below, there is a real conflict between the current high level of inflation and what the market is pricing in for inflation over both the near and long term. While core CPI has declined sequentially for three months in a row, the rate of decline has been slower than market expectations. Meanwhile, expectations for inflation over the next two years have dropped from a peak of 4.9% to 2.9%. Market expectations for inflation longer term (roughly 2027-2032) have declined to 2.1%. The second order effect of inflation on growth is increasingly of concern to investors. We see conflict on this front between real-time data and financial market leading indicators.

Growth data in the U.S. has been generally solid, including critical areas like consumer spending and capital expenditures. Nonetheless, GDP in the first quarter fell 1.6% due to weak exports and declining inventories. Some economic forecasting models see second quarter GDP flirting with zero growth, which would lead to a “technical” recession. For a full-blown recession to take hold, we would expect to see much broader declines in economic activity, especially in areas like the labor markets and capital spending. Yet, indicators like the yield curve, high yield spreads and consumer confidence are flashing warning signs. As a result, we now estimate a 50%/50% probability of a U.S. recession over the next 18 months. Importantly, we think any recession is more likely to be of the shallow, cyclical type as opposed to a deep, structural recession.

We continue to focus on Eastern Threats as a primary risk case. We have been more cautious on European growth, due to the impact of the Russia/Ukraine war on activity and the increased uncertainty about European energy supplies. This will likely lead to a European Central Bank that is more dovish than the Fed, especially as it focuses on controlling interest rate differentials amongst its leading economies. Chinese growth has been disappointing, with the continued growth drag from Covid in China leading to some increased fiscal support in recent months. In response to our more cautious economic outlook, we made another change in our Global Policy Model this month as we reduced our recommended position in Natural Resources by 2%, allocating the proceeds to Cash. Overall, this leaves the Global Policy Model modestly underweight traditional equities, modestly overweight real assets, overweight high yield bonds and underweight investment grade bonds. Market volatility is likely to remain high until clarity is reached on the Fed’s rate cycle, and the resulting impact on economic growth.

The Move Index uses implied volatility of 1-month Treasury options across the curve to create a weighted measure of interest rate volatility. The last time we wrote about this index, we were writing about the lack of volatility in the Treasury market with yields trading in tight ranges. Today, that story has flipped. When looking at the Move Index, Treasury volatility sits just below 2020 highs. Volatility has been driven by mainly two factors: 1.) thin liquidity; and 2.) the uncertain path of monetary policy. While liquidity tends to be lighter during the summer months, this year it is even lighter than seasonal factors would suggest. Liquidity has recently trended at or below levels seen in 2020, with front-end liquidity near Global Financial Crisis levels. As a result, the cost of trading Treasuries has increased across the entire curve. Additionally, yields have been very sensitive to economic data as investors analyze how each data release will impact the speed at which the Federal Open Market Committee (FOMC) will tighten policy.

Volatility is likely to persist, notably in the front end, until inflation subsides and the Fed policy path is clear. With inflation stubbornly high, and consistently hawkish FOMC commentary, we raised our six-month forecast for 2-year and 10-year Treasury yields to a central tendency of 3%. 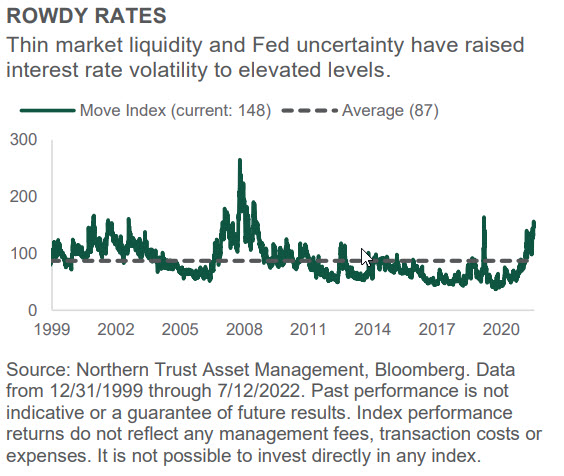 The high yield (HY) market saw poor performance in June, posting the second worst monthly return since the Global Financial Crisis (GFC). Spreads widened over 160 bps on fears of persistent inflation and an aggressive Fed slowing growth. Given the recent selloff, high yield valuations have become increasingly attractive, with a yield to worst of 8.9% at the end of June. This is only the fourth time since the GFC that index yields have reached 8% or higher. Index yields at this level or above have historically been attractive entry points for high yield from a total return perspective. Per the chart to the right, when index yields are 8% or higher, the average 12-month forward return has been 13% or more (dating back to 2010).

Despite the negative sentiment in the asset class, current valuations present an opportunity with spreads nearing recessionary levels at the end of this month. From a fundamental perspective, there is opportunity that realized forward default rates will be lower than current market implied forward default rates due to extended maturity profiles that allot companies greater flexibility to manage through stress. Additionally, recovery rates may prove more resilient than expected with leverage near all-time lows. High yield remains our largest overweight position. 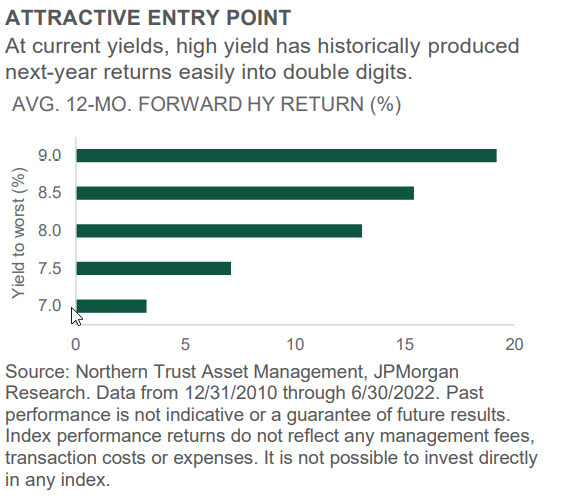 Over the past month, investors partially shifted their attention from the risk of high inflation and commensurately tight monetary policy to the risk of recession. This shift acted as a modest headwind to global equity markets, a strong tailwind to the U.S. dollar, and helped lead interest rates and commodity prices lower. In turn, this combination impacted the value versus growth trade, with growth outperforming after extended underperformance. The energy sector got hit particularly hard, although it is still by far the best performing sector year-to-date. And a combination of dollar strength and style rotation out of value subsequently caused Europe and Japan to underperform relative to the U.S.

Investors remain cautious regarding the outlook for inflation and growth. The headwinds from tighter financial conditions, higher food and energy prices and elevated geopolitical uncertainty mean a slowdown is likely and a technical recession may occur, with Europe at the front of the queue and the U.S. a bit behind. Also, risk remains to the downside with respect to further disruption in Russian natural gas supply and ongoing Covid disruptions in China. Tactically, we maintain a moderate U.S. overweight in the context of a 2% underweight to equities overall. 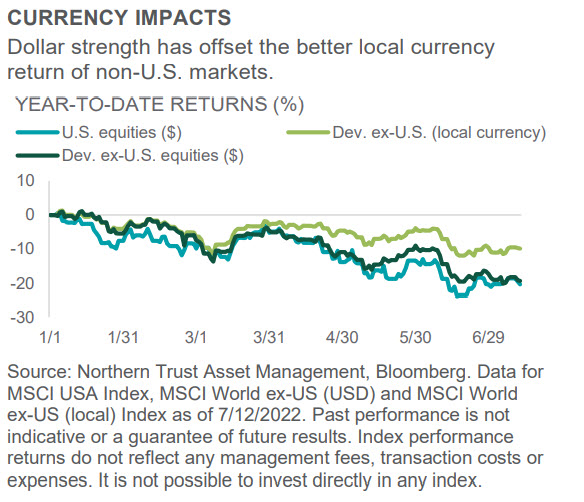 As market attention shifts from too much inflation to too little growth, more cyclical asset classes (notably natural resources) may come under further pressure in the short term. As such, we reduced our natural resources (NR) allocation back to strategic levels while we weather the current market storm. However, we wouldn’t get too negative on NR. Addressing the intermediate-to-longer term, industrial metal demand may come from the green transition/infrastructure build out; peak oil demand isn’t likely until the 2030s; and the growing number and severity of droughts puts agricultural production at ongoing risk.

Meanwhile, the near-term environment is best characterized as supply constrained – notably in the energy markets. Despite decade-high oil prices, the number of rigs deployed for drilling wells remains subdued (see chart). As producers put less money in the ground and more money in their pockets, industry financial health has improved and dividends have increased. NR dividend yields currently sit above 5% (which we view as relatively safe). All said, over a tactical horizon, we currently prefer listed infrastructure to natural resources given near-term macro uncertainties – but continue to see the long-term appeal of natural resources in portfolio construction. 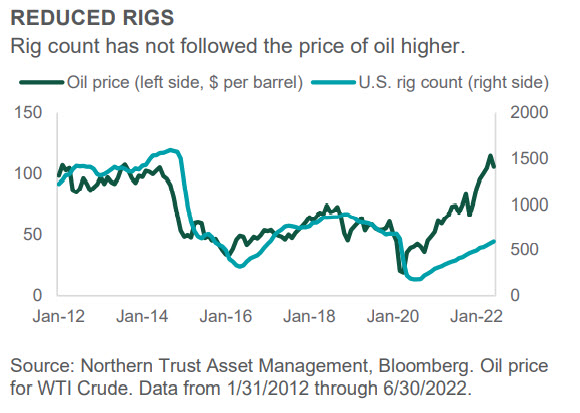 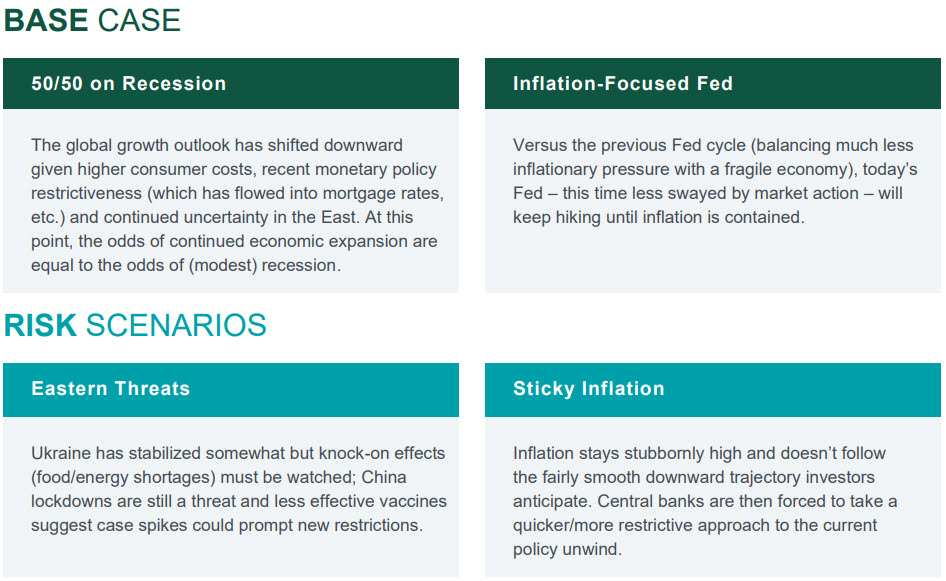 Global Weekly Commentary: Why we like credit over equities

We prefer investment grade (IG) credit over equities on a tactical horizon as we see a new market regime with higher volatility taking shape.