Linda just entered retirement with a $1 million dollar nest egg account from which she plans to drawdown $40,000 per year (a 4% withdrawal rate, without indexing for inflation) for the next 20 years to support her retirement life, so that’s $800,000 total payout over the next 20 years. By the end of the 20 years, she will take out the remaining account value. What investment approach can Linda take to meet this income goal?

In general, there are two approaches that retirees typically take:

The income approach emphasizes cash flow generation, meaning the investor would withdraw the distributions of their portfolio, such as dividends and coupon payments. To generate the required distributions, income strategies typically tilt portfolios toward asset classes with higher current income, such as high dividend stocks, credit-sensitive corporate bonds and longer-duration fixed income assets.

Meanwhile, total return approaches typically don't rely on distributions as the source of withdrawals. Instead, the investor would accumulate wealth throughout the year, then sell part of the portfolio periodically (in this study, we've assumed annually) to meet the withdrawal needs. Because they don’t rely on distributions, these portfolios tend to look much like a traditional target risk portfolio, such as a 40% equity holding and a 60% fixed income holding (we've used stock/bond split of 40/60 for this study). 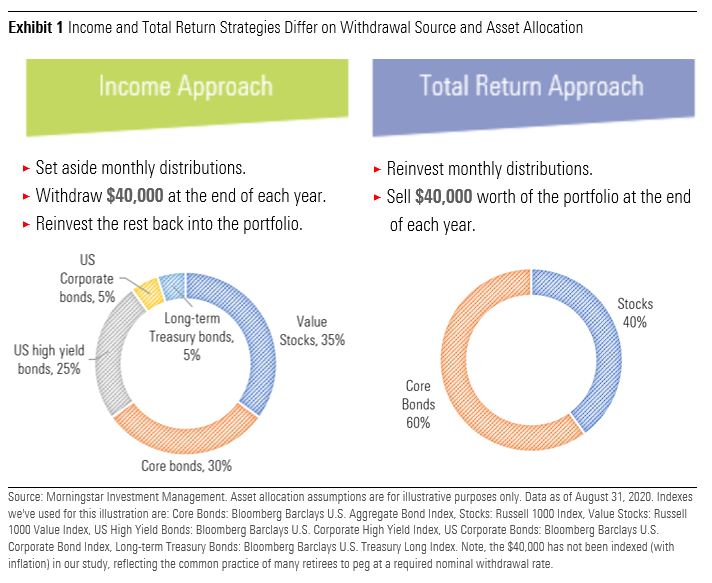 Linda, as a test subject, can take both paths, and we can review her hypothetical outcome from each portfolio, income and total return. But the rest of us aren't so lucky—we need to pick the right portfolio because we only get one shot at retirement. We hope studying Linda's hypothetical results will help advisors lead clients to the right portfolio.

To look at how Linda would have fared with each portfolio type, we identified three key concerns that an income investor would consider when evaluating solutions for income needs—income stability, income source, and end account value. 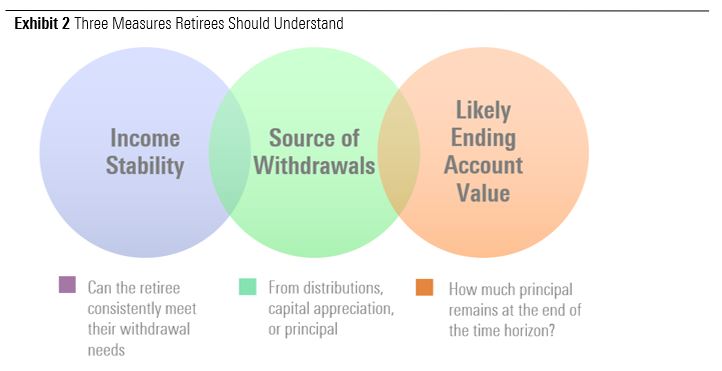 We look at the past 163 rolling 20-year periods (starting from 1987) and examine each of the concerns above to see how Linda would fare using each approach.

Before we get to the results, let’s take a guess—Which approach do you think would meet the income goal of $40K withdrawal per year for 20 years?

You're right! (The answer is both, actually.) Both the income and the total return approaches met the income goals over all the 163 rolling 20-year rolling since 1987.

For the income approach, this is important—especially given the low-yielding environment. In this regard, we note that as interest rates have fallen, the total distribution level (in both percentage and dollar terms) has also fallen across the 163 rolling 20-year periods. For the total return approach, this is perhaps less important, given it is designed to support the withdrawals from the capital balance.

The key learning here is that the income approach has been able to meet the payout needs despite the low rate environment, which was achievable due to the strong emphasis on income producing asset classes.

Next, let’s take a look at the source of income. In other words, how does each strategy meet an investor's income goals? From income, like dividends and coupon payments? Or by selling assets, either capital gains or the original savings (principal)?

This time, they're not the same. For the income approach, Linda didn’t have to dip into her principal at all. That is, the cash flow generated from her portfolio was enough to cover the required payouts for all rolling periods. For the total return approach, it is a different story as Linda was dipping into her principal in 37 of the 163 rolling periods. It didn’t happen that often—about 23% of the periods—but when it happened, it could have a negative psychological impact on investors like Linda, especially when it happens after major market declines.

For example, the 20-year period from September 2000 to August 2020 was one such event, where market declines coupled with forced withdrawals. This 20-year period started during the tech bubble, so Linda would have suffered from meaningful losses in the first two years, and again in 2008-09.

Of course, the income strategy would have fallen too, but the difference between the two approaches is that the income strategy was able to meet Linda's income need without needing to touch the principal. This is evident in Exhibit 2, showing the green portion of the bar was higher than the gray dash across all 20 years. 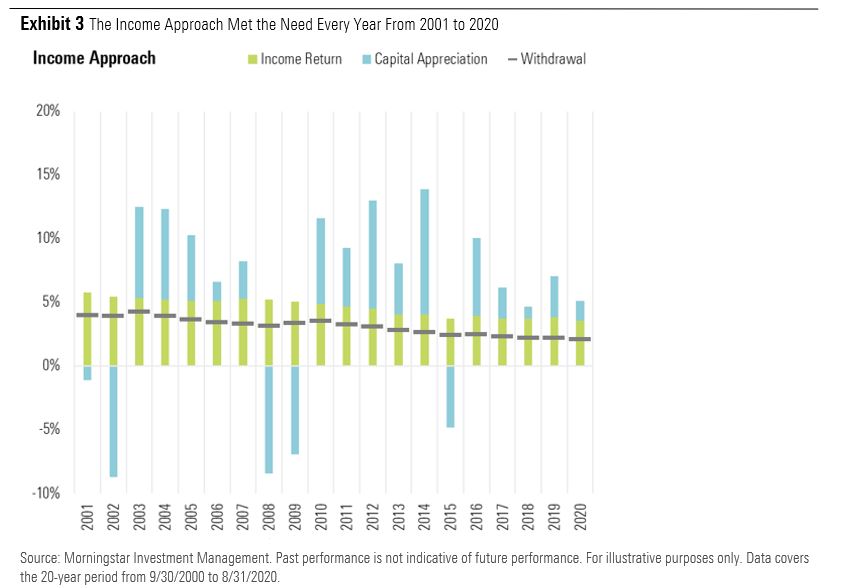 Unfortunately, this was not the case for the total return approach. Using the same 20-year period from September 2000 to August 2020, Linda would have to dip into her principal in 18 of the 20 years--which reflects the low-yielding environment and the fact the remaining principal was smaller (due to the initial selloff in 2000-02). What happened after the first couple of down years was that, because the portfolio lost so much principal in the first two years from market selloffs and annual withdraws, it never grew back to the size needed to generate enough income to meet future withdrawal needs.

People tend to believe that the total return approach will outperform income because you have to give up something if you want income. But that’s not what we found out. 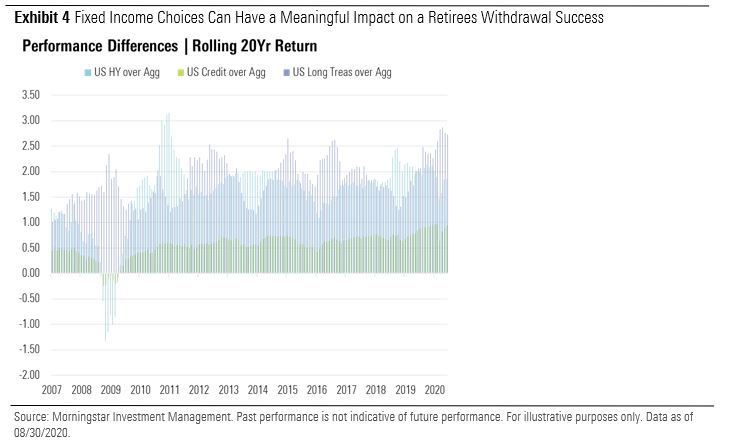 About Tax and Behavior

We excluded tax implications from our study, as everybody’s tax situation is different. However, we do want to point out that in general, the total return approach could reduce the tax impact. That’s because under the income approach, all of the cash flow received by investors could be taxed in its entirety, whereas the total return approach tends to only trigger a tax event on capital gains at the point of sale, which in some cases could be significantly smaller than the entire dividend amount.

There are also key behavior considerations associated with both approaches. If the investor would have a strong negative feeling about dipping into principal, for example (especially when market experiences severe downturn), they should be cautious about using the total return approach.

We hope this paper provides guidance regarding which income approach may work best for a given retiree. There is no one best choice that works for everyone. Depending on your needs and your key concerns, you may well have a different choice.

The lesson from Linda's income study is that both approaches are likely to meet her income needs. Ultimately, retirees must balance the pros and cons of each approach.

If you are interested in investing in these types of income approaches, visit our Retirement Income or Multi-Asset Income portfolio series.  These series provide a range of options for generating and managing income needs for your clients.

Opinions expressed are as of the current date; such opinions are subject to change without notice. Morningstar Investment Management shall not be responsible for any trading decisions, damages, or other losses resulting from, or related to, the information, data, analyses or opinions or their use. This commentary is for informational purposes only. The information, data, analyses, and opinions presented herein do not constitute investment advice, are provided solely for informational purposes and therefore are not an offer to buy or sell a security. Please note that references to specific securities or other investment options within this piece should not be considered an offer (as defined by the Securities and Exchange Act) to purchase or sell that specific investment. Performance data shown represents past performance. Past performance does not guarantee future results. All investments involve risk, including the loss of principal. There can be no assurance that any financial strategy will be successful. Morningstar Investment Management does not guarantee that the results of their advice, recommendations or objectives of a strategy will be achieved. This commentary contains certain forward-looking statements. We use words such as “expects”, “anticipates”, “believes”, “estimates”, “forecasts”, and similar expressions to identify forward-looking statements. Such forward-looking statements involve known and unknown risks, uncertainties and other factors which may cause the actual results to differ materially and/or substantially from any future results, performance or achievements expressed or implied by those projected in the forward-looking statements for any reason. Past performance does not guarantee future results. Morningstar® Managed PortfoliosSM are offered by the entities within Morningstar’s Investment Management group, which includes subsidiaries of Morningstar, Inc. that are authorized in the appropriate jurisdiction to provide consulting or advisory services in North America, Europe, Asia, Australia, and Africa. In the United States, Morningstar Managed Portfolios are offered by Morningstar Investment Services LLC or Morningstar Investment Management LLC, both registered investment advisers, as part of various advisory services offered on a discretionary or non-discretionary basis. Portfolio construction and on-going monitoring and maintenance of the portfolios within the program is provided on Morningstar Investment Services behalf by Morningstar Investment Management LLC. Morningstar Managed Portfolios offered by Morningstar Investment Services LLC or Morningstar Investment Management LLC are intended for citizens or legal residents of the United States or its territories and can only be offered by a registered investment adviser or investment adviser representative. Investing in international securities involve additional risks. These risks include, but are not limited to, currency risk, political risk, and risk associated with varying accounting standards. Investing in emerging markets may increase these risks. Emerging markets are countries with relatively young stock and bond markets. Typically, emerging-markets investments have the potential for losses and gains larger than those of developed-market investments. A debt security refers to money borrowed that must be repaid that has a fixed amount, a maturity date(s), and usually a specific rate of interest. Some debt securities are discounted in the original purchase price. Examples of debt securities are treasury bills, bonds and commercial paper. The borrower pays interest for the use of the money and pays the principal amount on a specified date. The indexes noted are unmanaged and cannot be directly invested in. Individual index performance is provided as a reference only. Since indexes and/or composition levels may change over time, actual return and risk characteristics may be higher or lower than those presented. Although index performance data is gathered from reliable sources, Morningstar Investment Management cannot guarantee its accuracy, completeness or reliability.

Can I invest my IRA in this?

Alternative assets, such as cryptocurrencies, art, private equity and more, have seen a surge in press coverage over the past decade, to the point that many of these alternative investments have become more mainstream than ever before.

The Not-So-Easy Steps to Investing Success

article by Janus Henderson Investors
This piece is approved to use with clients.

While investors will always be looking for ways to time the markets, there are no shortcuts to investing success. Retirement Director Ben Rizzuto considers the lessons to be learned from the recent GameStop trading activity and outlines three steps to building a strategic long-term investing plan.

We believe viewing retirement health care costs as an annual expense, instead of as a lump sum, makes it easier for retirees to plan for and pay for them.