Financial Planning
Goals/Needs-Based Investing
Print
Share
article by Swan Global Investments
This piece is approved to use with clients.

The Importance of Consistency of Returns

What Will Be Covered

Consistency of returns is an important driver of overall investment results, just like in sports and other areas of our lives. In fact, investors and advisors could learn a lot from the intentional consistency sought after by top sports performers.

Consistency Is King, Both in Sports and Investing

Ken Griffey Jr. was the greatest ballplayer I’ve ever seen. When he was inducted into the National Baseball Hall of Fame in 2016, Griffey talked about consistency:

“On the Mariners, we had this philosophy in the clubhouse that we referred to as Baseball Gods. Maybe it was more of a superstition than a philosophy. When someone referred to Baseball Gods, we were acknowledging that this game will make you feel human really fast: Never get too high on yourself and never get too low. It was a reminder that you’re never as bad as they say you are and never as good as you think you are.”

What Griffey said about baseball can also be said about the markets: they always have a way of humbling you. It’s important to keep your head on straight when markets are either soaring or crashing.

Unfortunately, that’s easier said than done given the wild ride the markets have been on over the last decade or two. The graph below shows a breakout of annualized returns for every three-year period between July 1997 and December 2020. 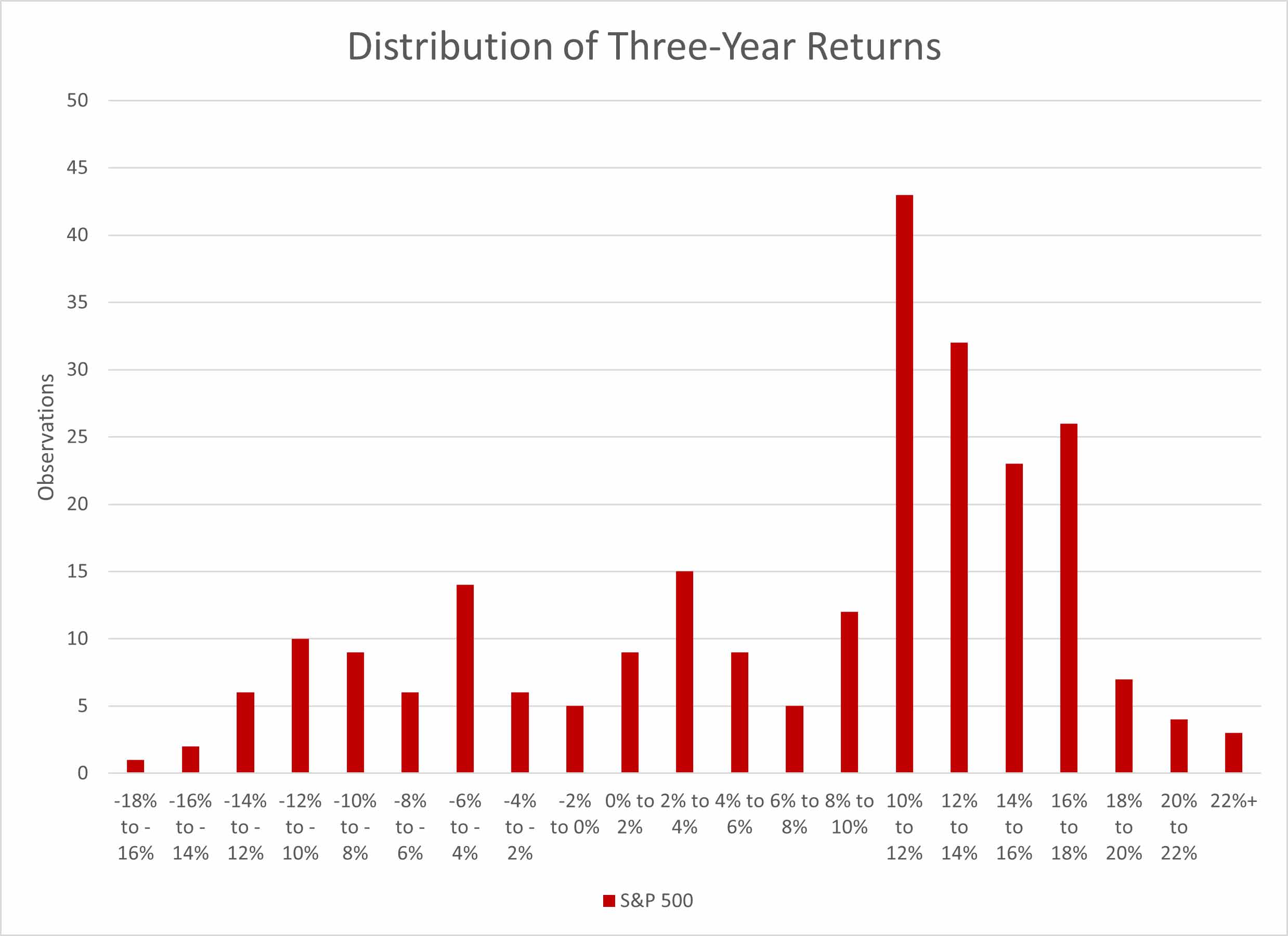 Return Distribution: A Test of Consistency

Usually, a distribution of observations (results) will be clustered near the mean, or average result, and then gently slope off in both directions.

However, this distribution has two or maybe even three peaks (tri-modal). A large number of occurrences cluster in 10%-to-18% range, which represents a very healthy return.

In addition, there are also a large number of occurrences where the annualized three-year returns were in the -8% to -14% range. Even more interesting, while the average three-year annualized return for the S&P 500 is 7.1%, there are very few times since July 1997 that the S&P 500 was close to its average – it was typically either way above or way below. 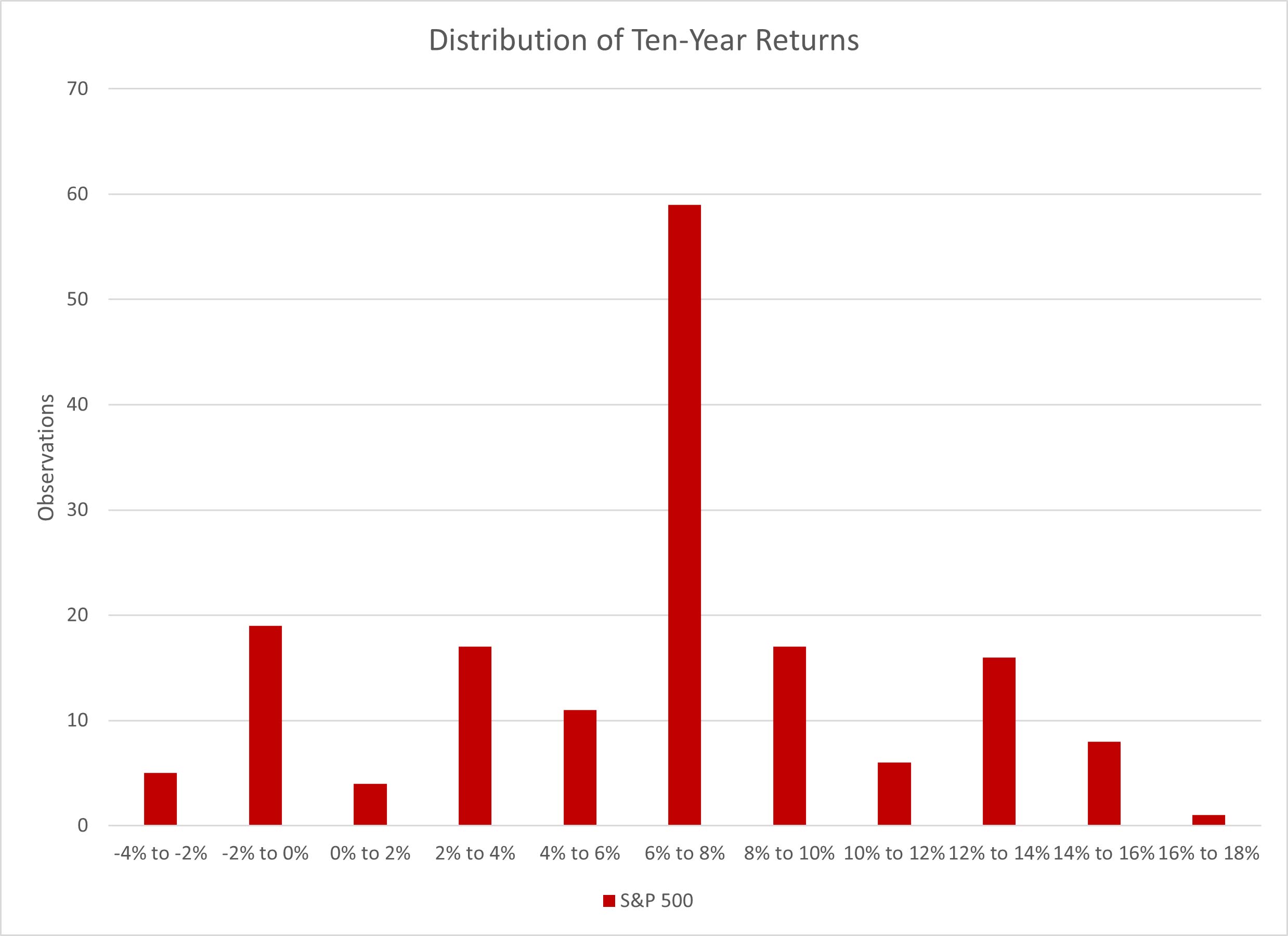 A large amount of dispersion also appears when looking at long-term, ten-year annualized returns. The largest bucket representing 62% of the outcomes is the 6% to 8% range; a perfectly acceptable result for most investors.

Worryingly though, the second most frequent range of ten-year returns is actually negative, ranging from -2% to 0%. Combined with the -4% to -2% bucket, 14.7% of the observations in this range were “lost decades.”

The Defined Risk Strategy was designed to mitigate the impact of these outlier events and possibly provide a smoother, less volatile experience, even through market volatility, in pursuit of narrowing outcome distribution and combating market risk. By actively hedging against bear markets, the DRS has a much smaller “left tail” risk of bad outcomes. Over its 24-year history the DRS has weathered the two largest bear markets since World War II: the dot-com bust of 2000-2002 and the financial crisis of 2007-09.

Below we see the distribution of annualized three-year returns of the DRS compared to the S&P 500.

By hedging with long-term put options, the DRS has historically minimized the impact of those bear markets. The distribution of DRS returns is what one hopes to see – the majority of returns are clustered near the average of the distribution.

The long-term returns of the Defined Risk Strategy have historically been more narrowly distributed, or more consistent. There isn’t a second peak to the distribution out in negative territory like there is for the S&P 500.

Of course, by maintaining the hedge at all times, the DRS will lag in up markets. There will be fewer observations in the high-teens or over-20% range. However, that is a trade-off the DRS has willingly accepted. It has always been Swan’s philosophy that avoiding losses is more important than capturing all of the market’s gains.

The logic and justification for this are spelled out in our white paper “Math Matters – Rethinking Investment Returns & How Math Impacts Results” by Portfolio Manager, Director of Research & Product Development, Micah Wakefield. 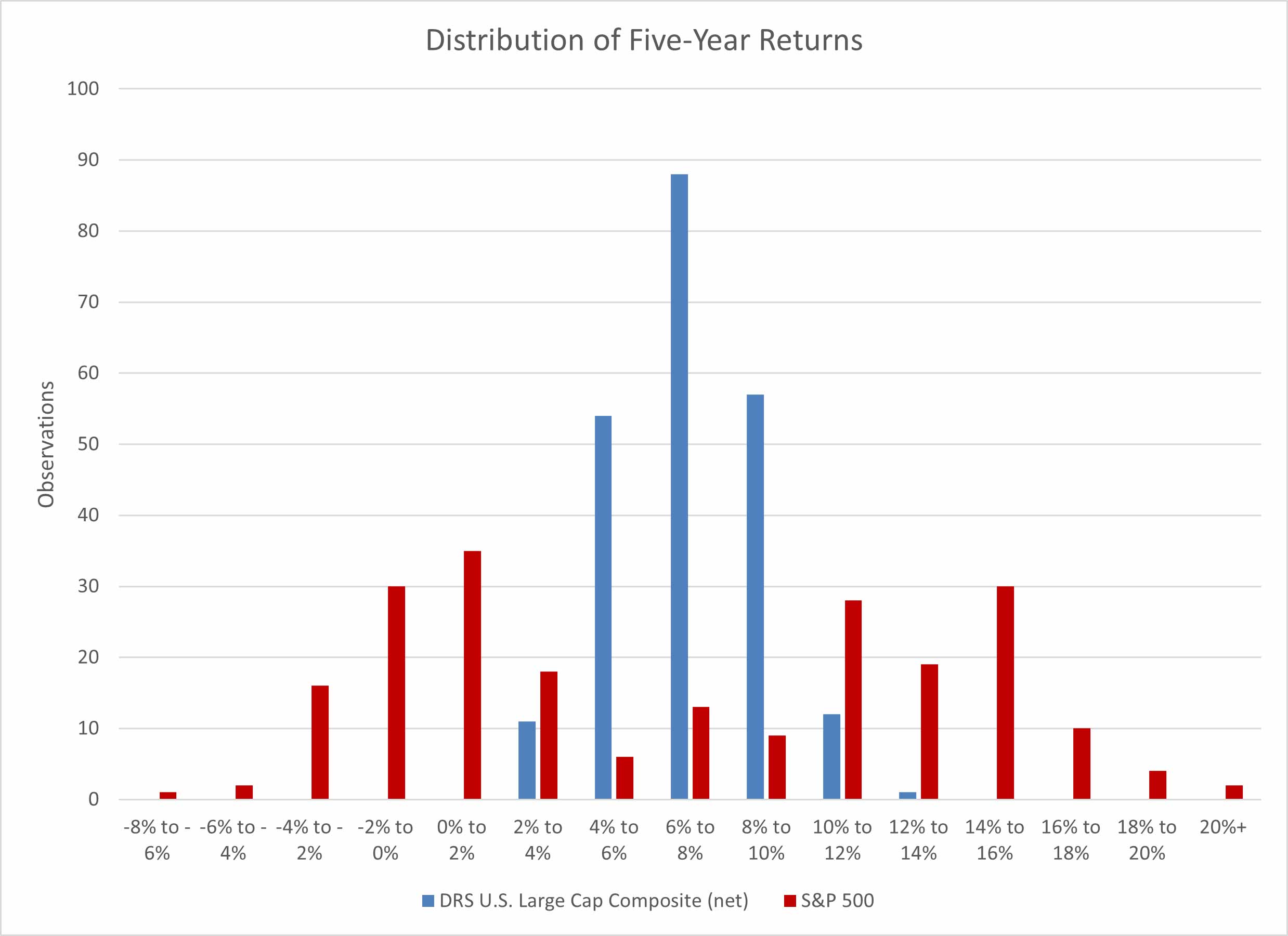 Compared to the S&P 500, the DRS’s annualized five-year returns look very appealing. Almost two-thirds of the 223 observations occurred in the 6% to 10% range. The most common bucket for the S&P 500 was the 0% to 2% range. 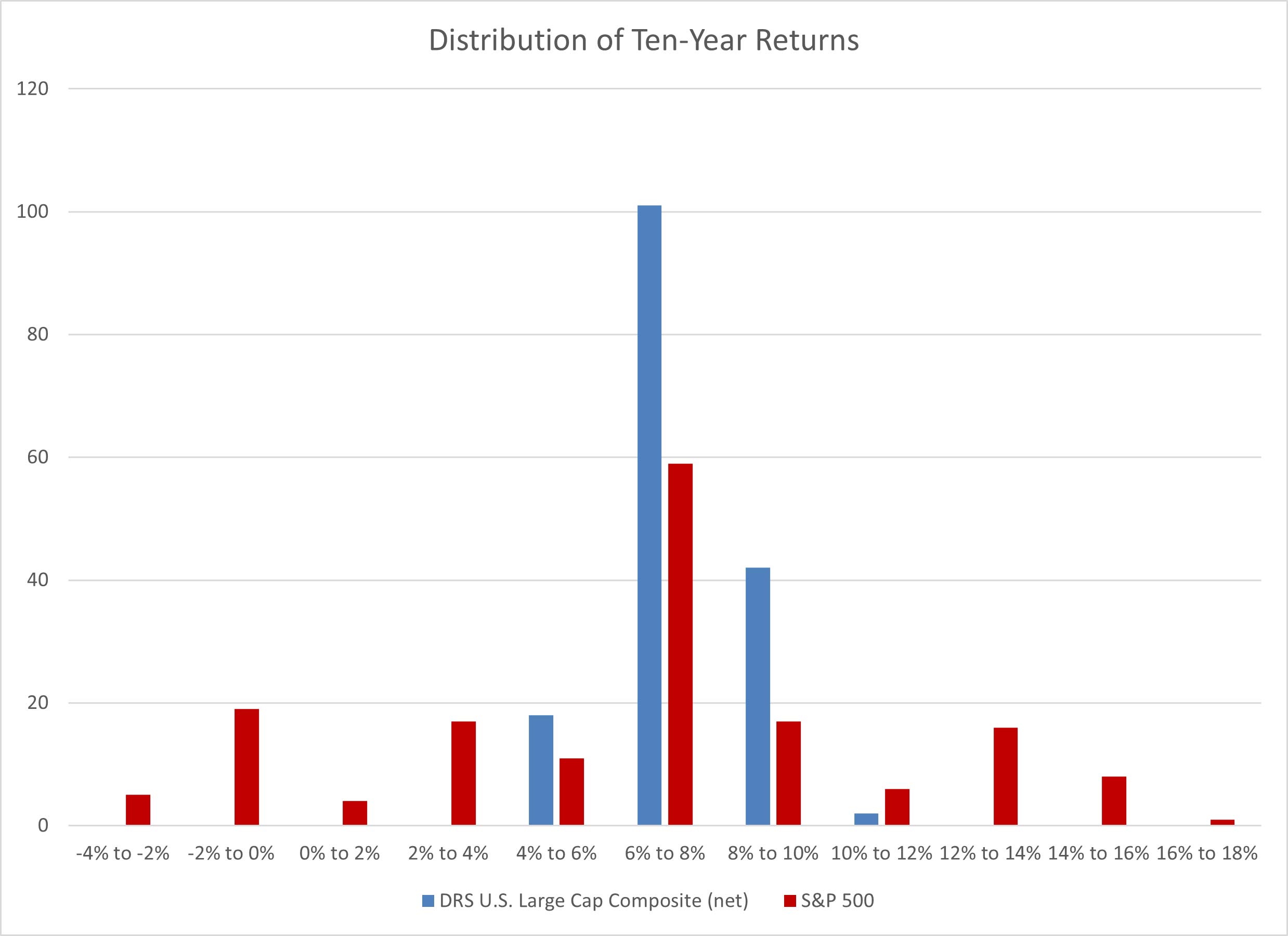 With a track record of 23.5 years, the sample size affords a healthy number of decade-long returns to analyze – 163 observations, in all. Historically, the long-term results of the DRS show a remarkable degree of consistency. Again, the value of hedging against bear market losses and market volatility is easily illustrated in this chart.

Another secondary, finer point of these charts has to do with timing.

We are often asked, “When is the best time to buy the DRS?” If an investor’s previous market experience has been in something like the S&P 500, it is a perfectly rational question to ask.

As we have seen, an investor could have experienced radically different results, depending upon the time frame in question. However, the DRS almost renders this timing question moot as the range of outcomes has been very tight, as seen in the next table: 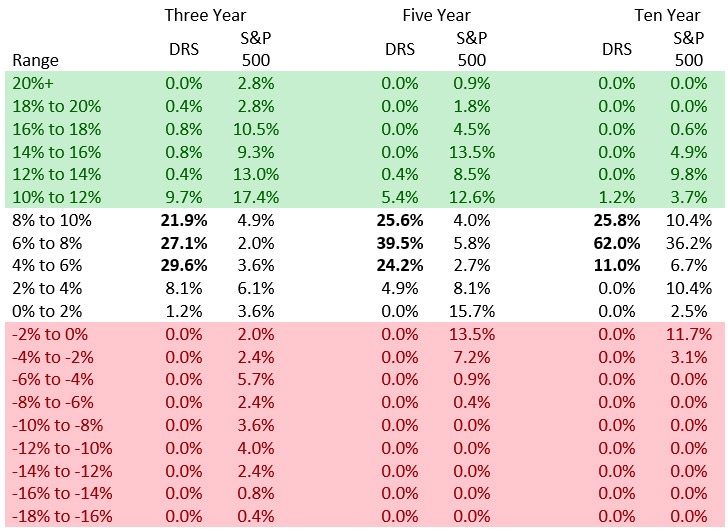 As Mr. Griffey said, it’s important not to get too high or too low.

We believe long-term investors are better off by remaining passively invested to pursue portfolio growth and actively mitigating their biggest risk – market risk. Our time-tested Defined Risk investment approach has been applied to a range of asset classes and investment structures to help investors build globally diversified, hedged portfolios.

Marc Odo, CFA®, CAIA®, CIPM®, CFP®, Client Portfolio Manager, is responsible for helping clients and prospects gain a detailed understanding of Swan’s Defined Risk Strategy, including how it fits into an overall investment strategy. Formerly Marc was the Director of Research for 11 years at Zephyr Associates.

Swan Global Investments, LLC is a SEC registered Investment Advisor that specializes in managing money using the proprietary Defined Risk Strategy (“DRS”). SEC registration does not denote any special training or qualification conferred by the SEC. Swan offers and manages the DRS for investors including individuals, institutions and other investment advisor firms. Any historical numbers, awards and recognitions presented are based on the performance of a (GIPS®) composite, Swan’s DRS Select Composite, which includes nonqualified discretionary accounts invested in since inception, July 1997, and are net of fees and expenses. The Swan Defined Risk Strategy Select Composite demonstrates the performance of non-qualified assets managed by Swan Global Investments, LLC since inception. It includes discretionary individual accounts whose account holders seek the upside potential of owning stock, and the desire to eliminate most of the risk associated with owning stock. The Composite relies on LEAPS and other options to manage this risk. Individual accounts own S&P 500 exchange traded funds and LEAPS associated with the exchange traded funds as well as multiple other option spreads that represent other indices that are widely traded. The Defined Risk Strategy was designed to protect investors from substantial market declines, provide income in flat or choppy markets, and to benefit from market appreciation. Stock and options are the primary components of the strategy. Swan claims compliance with the Global Investment Performance Standards (GIPS®). All data used herein; including the statistical information, verification and performance reports are available upon request. The S&P 500 Index is a market cap weighted index of 500 widely held stocks often used as a proxy for the overall U.S. equity market. Indexes are unmanaged and have no fees or expenses. An investment cannot be made directly in an index. Swan’s investments may consist of securities which vary significantly from those in the benchmark indexes listed above and performance calculation methods may not be entirely comparable.

All Swan products utilize the Defined Risk Strategy (“DRS”), but may vary by asset class, regulatory offering type, etc. Accordingly, all Swan DRS product offerings will have different performance results and comparing results among the Swan products and composites may be of limited use. Economic factors, market conditions, and investment strategies will affect the performance of any portfolio and there are no assurances that it will match or outperform any benchmark. Therefore, comparing results shown to those of such indexes may be of limited use. The adviser’s dependence on its DRS process and judgments about the attractiveness, value and potential appreciation of ETFs and options in which the adviser invests or writes may prove to be incorrect and may not produce the desired results. There is no guarantee any investment or the DRS will meet its objectives. All investments involve the risk of potential investment losses as well as the potential for investment gains. This analysis is not a guarantee or indication of future performance. Prior performance is not a guarantee of future results and there can be no assurance, and investors should not assume, that future performance will be comparable to past performance. All investment strategies have the potential for profit or loss. Further information is available upon request by contacting the company directly at 970.382.8901 or visit swanglobalinvestments.com. 078-SGI-022620

1099 Main Avenue | Suite 206 | Durango, CO 81301 | 970.382.8901
SWAN Global Investments is a SEC registered investment advisor providing asset management services utilizing the Swan Defined Risk Strategy, allowing our clients to grow wealth while protecting capital. Please note that registration of the Advisor does not imply a certain level of skill or training. Swan Global Investments, LLC is affiliated with Swan Capital Management, LLC, Swan Global Management, LLC and Swan Wealth Advisors, LLC. Prior performance is not a guarantee of future results and there can be no assurance, and investors should not assume, that future performance will be comparable to past performance. Disclosure notice and privacy policy.

What is a Stock Worth?

What is a Put Option?

report by Swan Global Investments
This piece is approved to use with clients.

What is a Hedged Equity?

Simple, straight-forward explanation of a fast-growing sub-category of investment strategies.