Market Insights
Behavioral Finance
Print
Share
article by Swan Global Investments
This piece is approved to use with clients.

How to Address Recency Bias with Clients

Recency bias explicitly violates one of the most fundamental tenets of successful investing: the “buy low, sell high” maxim. Investors tend to chase returns, buying yesterday’s winners. Although the industry constantly warns that past performance is no guarantee of future results, investors often extrapolate a string of short-term wins indefinitely into the future.

Below are actionable ways to discuss and address recency bias with clients.

Recency bias can showcase itself when an investor is hesitant to adjust risky stock allocations to more defensive options because they expect the recent outperformance of an investment to continue.

Teachable moment: When an investor calls with a decision to invest or sell, be sure to explore their reasoning behind their decision. If it’s based on recent experience of the past year or two, ask them to look at the broader historical context and take the opportunity to explain how this is an example of recency bias, the potential drawbacks, and how it can affect their long-term financial plans. Then determine and explain your reasoning whether the decision makes sense or not.

When explaining recency bias to investors, a good analogy to use is that of the gambler who believes he is on a hot streak. A gambler who has just won on several consecutive rolls of the dice or spins of the roulette wheel is often tempted to press their bets upwards.

However, any cold-blooded statistician will tell you that each roll or spin is statistically independent of the previous or following one. A more accurate gambler’s proverb is “the dice have no memory.” Due to recency bias, that sound advice is often ignored.

Unfortunately, recency bias is embedded in one of the most frequently used metrics in finance—trailing returns. Usually the first question asked when judging a manager is, “What is your year-to-date return?” The follow-up question is often, “Okay, so what are your one-year, three-year, and five-year returns?”

The problem with this line of thinking is that the most recent returns have a disproportionate impact on all these time periods. In addition, trailing returns can vary greatly based on months adding or dropping off. If the most recent quarter or two have been very good, it will likely flatter all the time periods in question. Conversely, if the recent quarter has been poor, it will likely poison the whole set of trailing returns.

Consider the following example. The data features the trailing one quarter, one year, three year, and five year returns for two return series. If you were to ask someone who is the superior manager, most people would say Manager A is clearly the winner. Moreover, most investors would likely say Manager B is a “sell” and Manager A is a “buy”. 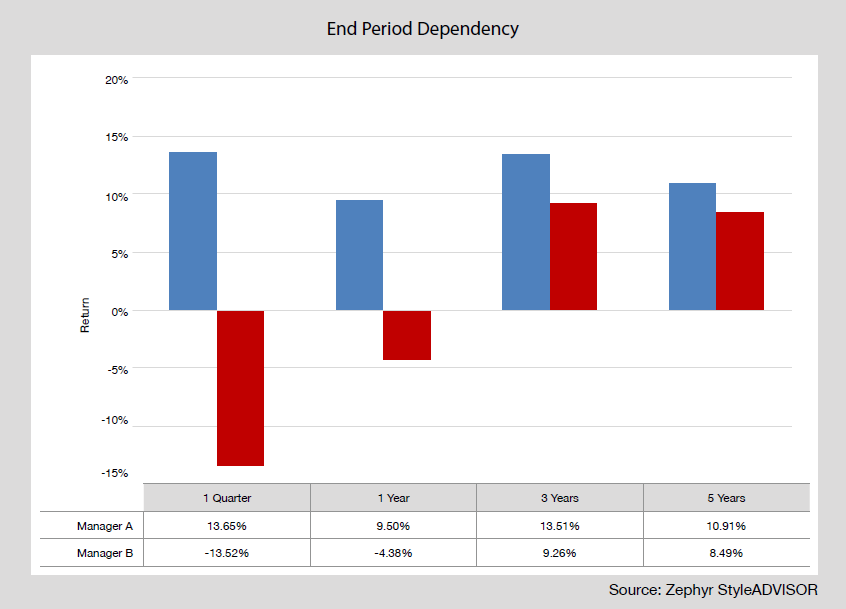 The truth is this is the same data series. Both sets of returns are the S&P 500 index. The only difference is the end date. “Manager B” is the S&P 500’s returns through December 31st, 2018. “Manager A” is the S&P 500 through March 31st, 2019, a mere 90 days later. The picture looks entirely different, but this is a perfect illustration of how recency bias can skew people’s views on an investment.

Ironically, anyone who did decide to “sell Manager B” on December 31st, would have missed out on the 13.65% returns that were just around the corner. Hindsight would tell that if you truly wanted to “buy low” that the time to do it was on January 1st.

Action Plan: Focus on the Long-Term

Although recency bias is deeply ingrained into investor thinking, there are two ways to manage the bias.

First, it’s important to maintain a long-term view when discussing investing performance and plans with clients. This requires advisors to consistently redirect clients’ preoccupation with short-term metrics and recent news to their long-term goals and plans.

Recency bias leads to either greed or fear, both of which are harmful to investors. One of the best ways to address behavioral biases is by constructing portfolios that seek to manage investor emotions before they happen.

Swan Global Investments, LLC is a SEC registered Investment Advisor that specializes in managing money using the proprietary Defined Risk Strategy (“DRS”). SEC registration does not denote any special training or qualification conferred by the SEC. Swan offers and manages the DRS for investors including individuals, institutions and other investment advisor firms. Any historical numbers, awards and recognitions presented are based on the performance of a (GIPS®) composite, Swan’s DRS Select Composite, which includes non-qualified discretionary accounts invested in since inception, July 1997, and are net of fees and expenses. Swan claims compliance with the Global Investment Performance Standards (GIPS®).

All Swan products utilize the Defined Risk Strategy (“DRS”), but may vary by asset class, regulatory offering type, etc. Accordingly, all Swan DRS product offerings will have different performance results due to offering differences and comparing results among the Swan products and composites may be of limited use. All data used herein; including the statistical information, verification and performance reports are available upon request. The S&P 500 Index is a market cap weighted index of 500 widely held stocks often used as a proxy for the overall U.S. equity market. Indexes are unmanaged and have no fees or expenses. An investment cannot be made directly in an index. Swan’s investments may consist of securities which vary significantly from those in the benchmark indexes listed above and performance calculation methods may not be entirely comparable. Accordingly, comparing results shown to those of such indexes may be of limited use. The adviser’s dependence on its DRS process and judgments about the attractiveness, value and potential appreciation of particular ETFs and options in which the adviser invests or writes may prove to be incorrect and may not produce the desired results. There is no guarantee any investment or the DRS will meet its objectives. All investments involve the risk of potential investment losses as well as the potential for investment gains. Prior performance is not a guarantee of future results and there can be no assurance, and investors should not assume, that future performance will be comparable to past performance. All investment strategies have the potential for profit or loss. Further information is available upon request by contacting the company directly at 970-382-8901 or www.swanglobalinvestments.com. 468-SGI-121819

Approaches that promote a more sustainable society and economy align to a given client’s personal view—and it’s important for an advisor to understand each client’s objectives and preferences.

Technological innovation in the financial services industry has helped make investing more attainable for U.S. households, allowing for broader ownership of individual stocks, mutual funds, ETFs, and a variety of other financial products. However...

Are Your Clients Experiencing FOMO?

FOMO is often discussed in relation to social media engagement, but it’s also commonly experienced by investors – particularly when stock markets are booming.