Worsening inflation is forcing global central banks to act more aggressively. We’ve raised our rate expectations in line with market consensus. As persistent inflation hits consumers and higher interest rates trim lending, we believe the odds of a modest recession are equal to the odds of growth. Rate volatility is likely to persist in the front end, with longer maturities stabilizing in line with long-run economic growth potential. 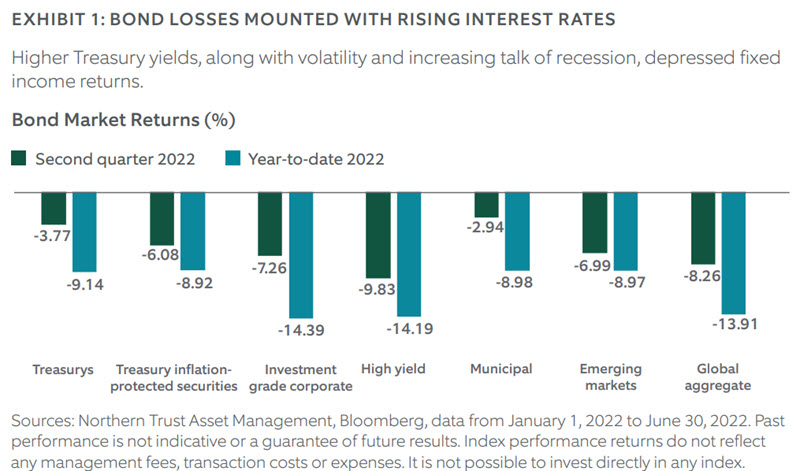 Many global central banks increased their target rates, attempting to slow their economies and control inflation. The Fed raised its rate at the March and June meetings by 0.50% and 0.75%, respectively. The June increase of 75 basis points was the largest rate hike since 1994. Ten of 11 voting members favored the 75 basis point increase, highlighting the committee’s desire to do whatever is necessary to lower inflation. Also reflecting their commitment, the Fed’s “dot plot” shows a year-end 2022 median dot of 3.4%, up from 1.9% in March. Interestingly, the new projections show a rate cut in 2024. This projection signals to the market that the Fed is willing to raise rates above “neutral” with the aim of achieving their dual mandate of price stability and full employment. Additionally, the Fed announced they would begin running off their balance sheet at a pace twice as fast as their pace following the Global Financial Crisis of 2008–2009.

The Bank of England (BoE) resisted the temptation to follow the Fed, opting to continue their consistent 25 basis point path and taking the base rate up to 1.25%. As we saw at the May meeting, the vote was split 6–3 in favor of the 25 basis point hike, with the same three members as in May voting for a more aggressive 50 basis point move. The European Central Bank (ECB) left policy rates unchanged at their June meeting and announced that as of July they would end purchases under their asset purchasing program. The ECB indicated they would begin hiking rates at their July meeting by 25 basis points, but their language for the September meeting hawkishly implied that a larger move of 50 basis points is their baseline before reverting back to a “gradual but sustained” path for normalization. The Swiss National Bank, Bank of Canada, Bank of Australia and numerous other central banks also hiked rates. 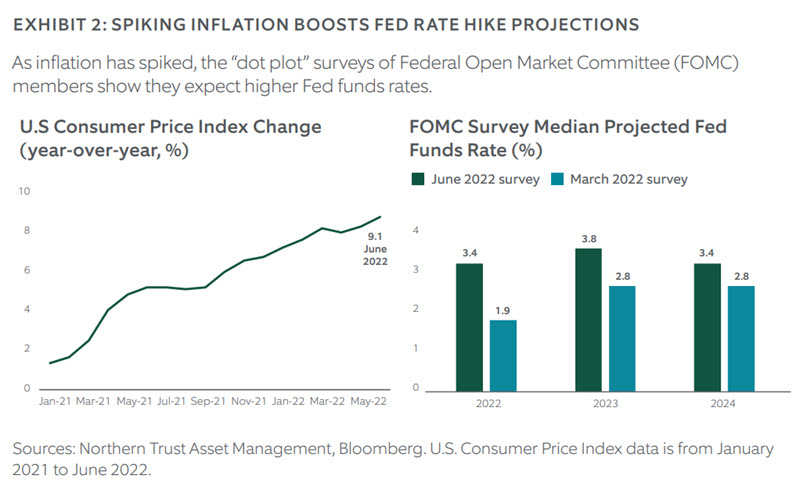 Volatility and tight liquidity in the Treasury market persisted into the second quarter. Treasury yields across the curve continued marching higher, with some maturities reaching their highest yields in over a decade. Liquidity remained an issue for the market. Some liquidity levels were at or worse than during the depths of the pandemic. Excess leverage likely played a role in the volatility, although some of the volatility can be attributed to fundamental factors.

The curve inverted in multiple areas, meaning that short tenors offer higher yields than their longer counterparts. Inversion often suggests that investors believe that inflation will remain high in the near term, forcing the Fed to keep raising rates. However, it also signals that investors fear that the increase in near-term rates is likely to hamper future growth, depressing long end yields.

The Treasury inflation-protected securities (TIPS) market had similar liquidity issues and stress when compared to nominal Treasuries. After moving higher in the beginning of the quarter, TIPS real yields increased and the break-even rate narrowed as a sign of the Fed’s commitment to fight inflation.

Similar to what happened in the U.S., European Union rates sold off throughout the quarter as market participants began to anticipate aggressive paths for rate hikes in both the U.K. and across both core and peripheral EU member countries (Spain and Germany). However, weak economic data began to affect sentiment later in the quarter, and market participants took on a notably risk off tone. Two year and 10-year gilts moved up 49 basis points (from 1.35% to 1.84%) and 10-year yields increased from 1.61% to 2.23% (+62 basis points). A similar theme applied to Germany, with two-year bund yields increasing by 72 basis points (from -0.07% to 0.65%) and 10-year yields increasing from 0.55% to 1.34% (+79 basis points). 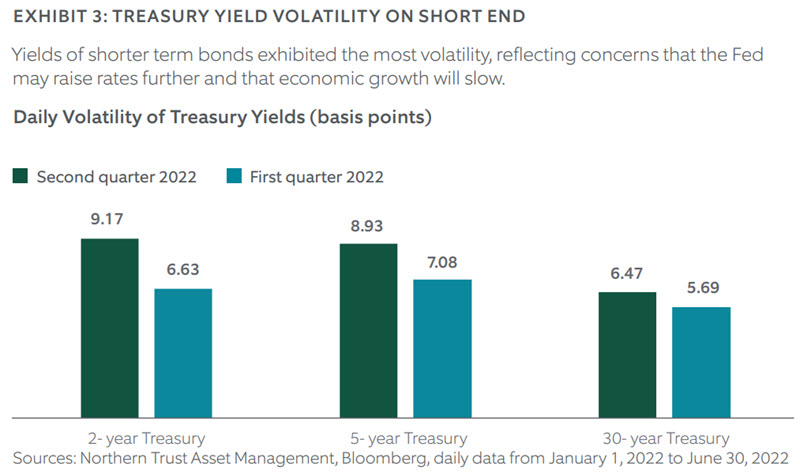 We still do not expect the usage of the reverse repo program to drop meaningfully until the balance sheet normalization process is well under way. Therefore, we expect a continued supply/demand mismatch, and short government paper will likely continue to trade at or below the reverse repo program’s rate. We remain focused on principal preservation, liquidity and yield, with particular attention on liquidity across our portfolios to accommodate any unexpected outflows. 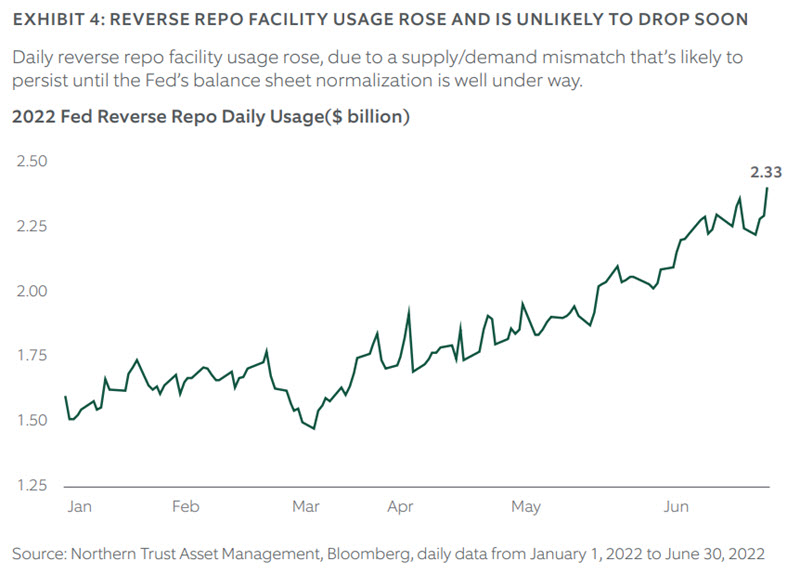 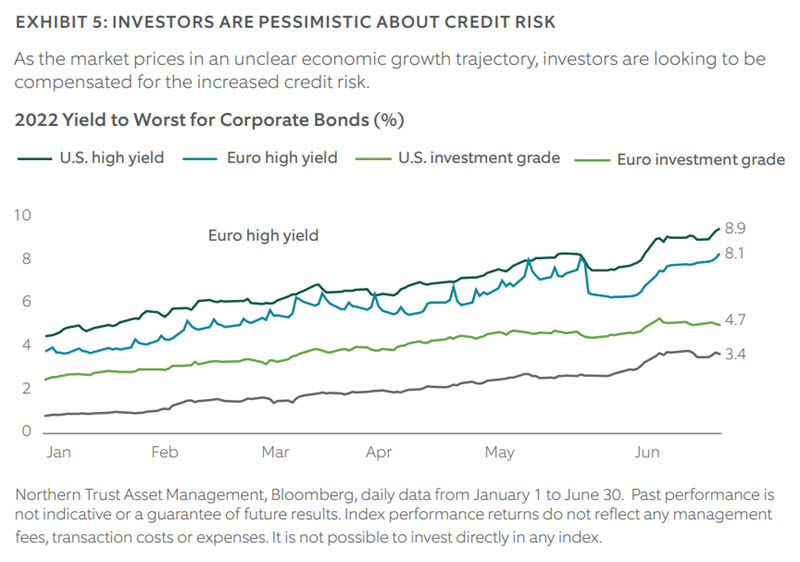 After one of the best performances in the fixed income market during the first quarter, U.S. high yield corporates reversed course and had their second worst performance since the global financial crisis of 2008–2009. The high yield index’s option adjusted spreads widened over 240 basis points, ending the quarter at 569 basis points. Although high yield corporates are less sensitive to interest rates than other fixed income, the broader risk-off sentiment hurt returns. CCC rated bonds fared the worst, recording their largest second quarter loss on record. Spreads on CCC rated bonds widened 418 basis points to close at 1,043 basis points, a level not seen since the summer of 2020. The spread widening also suggests that investors want to be compensated for the increased credit risk. Given the risk-off sentiment, coupled with robust 2020–2021 issuance, the primary market priced a dismal $25 billion of bonds. We continue to have a positive view of the fundamental backdrop for high yield, focusing on the mid-range of the credit quality spectrum to capture potential spread compression. The European high yield market saw even less issuance, pricing a mere €6 billion, the least since the second quarter of 2012. Affected by similar factors, the euro high yield market widened 257 basis points, ending the quarter at 650 basis points. Euro CCC rated bonds were high yield’s worst performers, returning -12.07%.

MUNICIPAL BONDS: OUTPERFORMED THANKS TO HIGHER YIELDS AND SLOWER SUPPLY

Municipal technicals started to improve into quarter-end as fund outflows slowed incrementally and higher rates resulted in less refunding issuance. Interest rate risk should typically be neutral to start trending toward long as the quarter progresses, with seasonal cash flows expected to create a net negative new issue environment. With the dramatic steepening of the yield curve in the second quarter of 2022, barbell structures will be increased, particularly in shorter mandate portfolios. Credit spreads widened dramatically in the airport and hospital sector, after record compression throughout the second half of 2020 and full-year 2021, with new issue coming at significant concessions and offering opportunities in select issuers. We generally remain biased to higher rated credits and sectors, particularly state and local general obligation bonds. The overall credit trend for state and local governments looks bright, with strong revenue growth and the final payouts of federal stimulus money resulting in increases to rainy day funds and overall pension funding levels.

Unless otherwise noted all data is sourced from Bloomberg as of 6/30/22.

For Asia-Pacific markets, this information is directed to institutional, professional and wholesale clients or investors only and should not be relied upon by retail clients or investors. The information is not intended for distribution or use by any person in any jurisdiction where such distribution would be contrary to local law or regulation. Northern Trust and its affiliates may have positions in and may effect transactions in the markets, contracts and related investments different than described in this information. This information is obtained from sources believed to be reliable, and its accuracy and completeness are not guaranteed. Information does not constitute a recommendation of any investment strategy, is not intended as investment advice and does not take into account all the circumstances of each investor. Opinions and forecasts discussed are those of the author, do not necessarily reflect the views of Northern Trust and are subject to change without notice.

Forward-looking statements and assumptions are Northern Trust’s current estimates or expectations of future events or future results based upon proprietary research and should not be construed as an estimate or promise of results that a portfolio may achieve. Actual results could differ materially from the results indicated by this information.

presentation by Nuveen
This piece is approved to use with clients.

U.S. Treasury yields rose yet again as the U.S. Federal Reserve (Fed) continued to ratchet up its hawkish tone.