Market Insights
Market Outlooks
Print
Share
article by Morningstar Managed Portfolios
This piece is approved to use with clients. 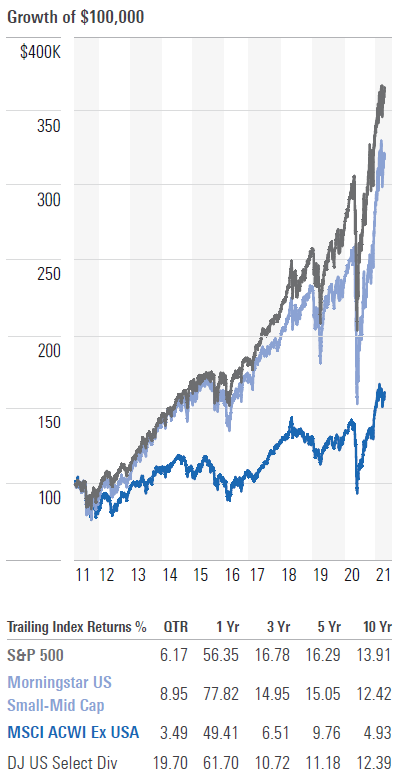 The global equity markets advanced in the first quarter. The S&P 500 generated a total return of 6.2%. Foreign stocks, as measured by the MSCI All Country World Ex USA Index, appreciated 3.5%. Small- and mid-cap U.S. stocks moved higher, with the Morningstar U.S. Small-Mid Cap Index gaining 8.9% for the quarter. And dividend stocks posted strong returns, with the Dow Jones U.S. Select Dividend Index up 19.7%.

Now, speculation—in which the focus is not on what an asset will produce but rather on what the next fellow will pay for it—is neither illegal, immoral nor un-American. But it is not a game in which Charlie (Munger) and I wish to play.

The equity market rally from the March 2020 lows continued into the first quarter of 2021. In the real world, as more vaccines continue to roll out globally, there’s hope of reverting back to a normal way of life relatively soon. In the investing world, some recent examples of abnormal speculative activity have carried over from the prior year.

One popular investing trend that continues is the rapid growth in special-purpose acquisition companies, or SPACs. According to the New York Times and Dealogic, 256 SPACs raised $83 billion from investors in 2020, up from $15.5 billion in 2019. As of March 24, 295 SPACs had gone public in 2021, raising $93 billion.

A SPAC begins as a shell company that raises cash from investors in an initial public offering (IPO), which is usually a relatively quick regulatory process given the only asset is cash. The money raised goes into a trust with the intention of finding a private company (usually a start-up) to acquire within an 18- to 24-month window--which explains why SPACs are referred to as “blank-check” IPOs. SPAC sponsors are typically business executives or investors who are viewed as capable of bringing in an attractive company for investment. Interestingly, some SPACs have started to hire celebrities and athletes as “advisors” to help recruit potential acquisition targets.

If a merger does not occur in the allotted time, SPAC investors essentially get their money back. If a merger takes place, the private company gets the money and shareholders receive shares (less the 20% of common equity that typically goes to sponsors as compensation for promoting the SPAC) in the newly combined firm that contains an actual business. This has become a fast-track method for a private company to go public without the lengthy SEC regulatory process for filing an IPO. It’s worth noting that SPACs have been around since the 1990s and the structure was historically used selectively by lower-quality firms that would struggle to meet the regulatory requirements for an IPO.

The surge in popularity is likely due to some combination of an increase in U.S. retail investors hunting for the next home-run stock, private owners looking to cash out at lofty valuations, and SPAC sponsors looking to seize the opportunity to generate fees while the iron is hot.

We suspect the price tags on private companies are likely to be inflated these days, especially given the rapid growth in the number of SPACs with blank checks chasing deals. Adding to this valuation concern is the fact that there’s usually a ticking clock to make a deal within 18 to 24 months, which can lead to various shortcuts, including a lack of discipline in conducting due diligence on target companies or how much to pay for a business.

One of the more speculative aspects of this SPAC phenomena occurs when share prices move higher before an acquisition is even announced. This means that in certain cases market participants are bidding up shares of a shell company before it has any assets besides cash—essentially anticipating what hot private company the SPAC might acquire without much regard to valuation. The underlying investment in an unproven company at lofty valuations already looks risky enough to us before layering on another layer of speculation in not knowing what will be purchased.

We’ve seen other examples of speculative fervor in recent months. The frenzied trading action in stocks like GameStop was unusual enough to capture the attention of the mainstream media in late January. Setting aside the retail investor versus hedge fund narrative and social media aspects of this story, trading in the stock eventually became a game of “what the next fellow will pay for it,” also known as the greater fool theory.

The team of portfolio managers and analysts on our Select Equity team don’t subscribe to the greater fool theory. When managing our equity portfolios, we do not view stocks as squiggly lines on a chart. Rather, we view buying a stock as taking an ownership stake in a business, whose value will be determined by its future steam of annual cash flows. We spend a considerable amount of time and effort conducting research on the competitive position and valuation for each of our potential investments, with the help of a small army of Morningstar analysts at our disposal.

We prefer to invest in high-quality businesses, which we define as those with durable competitive advantages, strong balance sheets, shareholder-oriented management teams, and a history of profitability. We don’t buy stocks at any price; instead we wait until they trade at discounts to our estimates of their intrinsic value. We will generally sell stocks when we deem them to be fully- to overvalued.

Our long-term and disciplined approach to investing stands in sharp contrast to chasing the latest fad or disregarding valuation in the hunt for the next home-run stock.

As always, we thank you for your business.

Index Information Individual index performance is provided as a reference only. Each index is unmanaged and is not available for direct investment. Since indexes and/or composition levels may change over time, actual return and risk characteristics may be higher or lower than those presented. Although index performance data is gathered from reliable sources, Morningstar Investment Management cannot guarantee its accuracy, completeness or reliability. Index data sources are as follows. S&P 500 Index—An index of 500 stocks chosen for market size, liquidity and industry grouping, among other factors. The S&P 500 is designed to be a leading indicator of U.S. equities and is meant to reflect the risk/return characteristics of the large cap universe. The S&P 500 is a market value weighted index. Morningstar US Small-Mid Cap Index—The index tracks the performance of US mid-cap stocks that fall between 70th and 90th percentile in market capitalization of the investable universe. In aggregate the Mid Cap Index represents 20% of the investable universe. MSCI ACWI Ex USA Index —Index captures large and mid cap representation across 22 of 23 Developed Markets (DM) countries (excluding the US) and 24 Emerging Markets (EM) countries*. With 2,150 constituents, the index covers approximately 85% of the global equity opportunity set outside the US Important Disclosures The information, data, analyses and opinions presented herein do not constitute investment advice; are provided solely for informational purposes and therefore are not an offer to buy or sell a security. Except as otherwise required by law, Morningstar Investment Management LLC and its subsidiaries shall not be responsible for any trading decisions, damages or other losses resulting from, or related to, the information, data, analyses or opinions or their use. Please consult with your financial advisor before making any investment decisions. Neither diversification nor asset allocation ensure a profit or protect against a loss in a declining market. Past performance is no guarantee of future results. Investments in common stocks involve risk (e.g., market and general economic conditions) and will not always be profitable. Common stocks are typically subject to greater fluctuations in market value than other asset classes as a result of such factors as a company’s business performance, investor perceptions, stock market trends and general economic conditions.

Markets have gone through a repricing in order to compensate for the idea of higher, sustained inflation. Here's our take on what's happening in today's market, and how we are positioning our portfolios to accommodate a range of potential outcomes.

Investors react to Fed’s hawkish comments. The Bank of England must balance growth and inflation.