Portfolio Construction
Sustainable Investing
Print
Share
article by William Blair
This piece is approved to use with clients.

The Cost of Climate Change

Is there a cost to climate change? Clearly so, and it’s impacting the profitability of companies in which we seek to invest.

Too Many Wildfires in California

PG&E may be the most visible example. The utility filed for bankruptcy in January 2019, citing liabilities stemming from the destruction of property during the devastating California wildfires of 2017 and 2018.

Certainly, drought was a causal element; forest mismanagement is also often cited. But wildfires such as those are supposed to be 100-year events, and they’re happening more and more often. PG&E points to the shifting climate as the cause.

Whatever the exact cause, the wildfires have turned PG&E into a poster child for climate-change dangers. When it filed for bankruptcy, it became the largest company to seek protection while blaming the effects of a warming planet for the situation.

How bad is PG&E’s situation? The utility’s market cap is around $9 billion today, but it has total debt of $19 billion. Some of this debt will be extinguished or renegotiated through bankruptcy, but there is still the matter of the utility’s nearly $10 billion of additional liabilities associated with the 2017 and 2018 wildfires.

PG&E has become a cautionary tale for other operators in the sector as they ponder the impact that climate change will have on their infrastructure and operations.

Brazilian hydropower generators are rolling in liabilities associated with not having enough water to produce power.

Not Enough Water in Brazil

Meanwhile, Brazilian hydropower generators are rolling in liabilities associated with not having enough water to produce power.

The largest proportion of Brazil’s power-generation matrix comes from renewables, and hydropower is the bedrock, thanks to the Amazon River, a bountiful source of water. However, increasing deforestation, rising temperatures, and poor rainfall have adversely impacted water levels in the tributaries of the Amazon.

That has hurt hydro power generators in Brazil, which have suffered significant losses since 2014 (around $100 billion reais)—all because they don’t have enough water to fulfill their electricity commitments.

Power generators sign long-term contracts to supply power, and if they can’t produce that power, they have to buy electricity in the open market to fulfill their commitments. When supply of power is constrained, the prices on the open market are high, resulting in a profit squeeze for operators who are under contract to deliver electricity at a contracted price, which is lower than the price paid.

Around 5% of the shortfall that hydro power generators are experiencing stems from infrastructure problems; the other 95% stems from Mother Nature.

Those are two examples of climate change potentially hurting a company, but the opposite is also possible.

Recently, for example, we analyzed a New Zealand utility that had experienced a sharp spike in profits. It turns out the spike was climate-change related.

In the fourth quarter of 2018, coal use in New Zealand jumped. Why? Because water levels in lakes that generate hydro power were low (due to droughts and not enough snowfall in the mountains), and the Pohokura gas field experienced an outage.

Given lack of hydro power and gas power supply, utilities that generate power from coal (like the company we were analyzing) have benefited greatly. The tight supply market has driven up electricity prices, allowing coal operators to sell electricity at prices that are currently very high.

While the droughts and gas-field outage in New Zealand are discrete events, the problem could become a long-term one. New Zealand has enough natural gas to generate electricity for only the next six years, and its energy minister says she has no way of knowing how soon new technologies and energy sources can fill the gap. Again, that bodes well for local utilities that generate power from coal—unfortunately, at a time when countries around the globe are trying to reduce CO2 emissions. 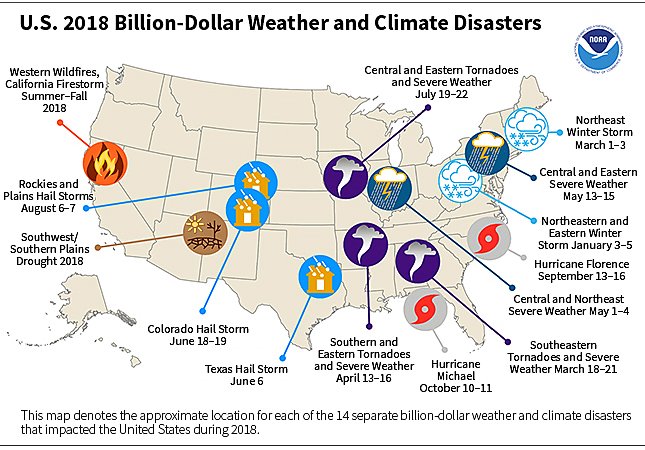 The Role of Climate Change

It’s difficult to say climate change is the sole cause of these problems. There are myriad causes, from forest mismanagement to deforestation, as noted.

But it’s safe to say that utilities have operated in the same way for decades, and it’s only now that they’re experiencing issues. So something else is going on.

Since 1980, the United States has experienced 241 weather and climate disasters where the overall damage reached or exceeded $1 billion, when adjusted for inflation, according to data from the National Oceanic and Atmospheric Administration. Between 1980 and 2013, according to NOAA, the nation averaged roughly half a dozen such disasters a year. Over the most recent five years, that number has jumped to more than 12.

The Earth changes. It affects companies. And we as active managers need to understand how.

Estimates are that billions of dollars would be required to “harden” the United States’ power infrastructure in a way that would present such catastrophic loss in the future.

As an active investment manager, we are constantly asking ourselves what situations such as these mean for investors. The Earth changes. It affects companies. And we as active managers need to understand how.

Is it wise, for example, to have overhead power lines that may touch trees in an environment where droughts are more common? Probably not. But what should utilities do about it? Move power lines below ground?

If so, what are the implications from an environmental perspective? Moving power lines below ground is akin to a pipeline project, and we’ve seen how much fury arises from the potential disruption pipelines cause to the environment.

What about from an investment perspective? Moving utilities below ground is a different work style than utilities are accustomed to, and would require a massive infrastructure investment. Which companies in the sector have the financial capacity to undertake such investments?

Or, do we need to rethink transmission? Should energy be more distributed than centralized? If we all have personal generators and solar panels and neighborhood wind turbines vs. getting energy from a power plant, we don’t have to worry about lots of lines that are vulnerable to fires and such, but that would require, again, a massive infrastructure investment.

The implication of these efforts would seemingly be higher electricity rates for consumers (unless, of course, as rates rise due to infrastructure investment, electricity costs decline because the grid is getting so diverse, creating an offsetting effect).

But remember, utilities are very highly regulated. PG&E, for example, is a publicly traded company, but the government of California has to approve any rate increases it proposes. Therefore, if rate increases are needed, there might have to be a relaxation of regulations so utilities can operate in a way that’s economically viable.

These things are part of our materiality assessment when we look at utilities. If we were to analyze PG&E, for example, an environmental consideration would be the vulnerability of its infrastructure to natural and unnatural disasters, including wildfires. Related costs will impact a company’s profitability and thus its investment appeal.

References to specific securities and their issuers are for illustrative purposes only and are not intended as recommendations to purchase or sell such securities. William Blair may or may not own any securities of the issuers referenced and, if such securities are owned, no representation is being made that such securities will continue to be held. It should not be assumed that any investment in the securities referenced was or will be profitable.

This content is for informational and educational purposes only and not intended as investment advice or a recommendation to buy or sell any security. Investment advice and recommendations can be provided only after careful consideration of an investor’s objectives, guidelines, and restrictions.

Information and opinions expressed are those of the authors and may not reflect the opinions of other investment teams within William Blair Investment Management, LLC, or affiliates. Factual information has been taken from sources we believe to be reliable, but its accuracy, completeness or interpretation cannot be guaranteed. Information is current as of the date appearing in this material only and subject to change without notice. Statements concerning financial market trends are based on current market conditions, which will fluctuate. This material may include estimates, outlooks, projections, and other forward-looking statements. Due to a variety of factors, actual events may differ significantly from those presented.

Investing involves risks, including the possible loss of principal. Equity securities may decline in value due to both real and perceived general market, economic, and industry conditions. The securities of smaller companies may be more volatile and less liquid than securities of larger companies. Investing in foreign denominated and/or domiciled securities may involve heightened risk due to currency fluctuations, and economic and political risks. These risks may be enhanced in emerging markets. Different investment styles may shift in and out of favor depending on market conditions. Individual securities may not perform as expected or a strategy used by the Adviser may fail to produce its intended result.

Investing in the bond market is subject to certain risks including market, interest rate, issuer, credit, and inflation risk. Rising interest rates generally cause bond prices to fall. High-yield, lower-rated, securities involve greater risk than higher-rated securities. Sovereign debt securities are subject to the risk that an entity may delay or refuse to pay interest or principal on its sovereign debt because of cash flow problems, insufficient foreign reserves, or political or other considerations. Derivatives may involve certain risks such as counterparty, liquidity, interest rate, market, credit, management, and the risk that a position could not be closed when most advantageous. Currency transactions are affected by fluctuations in exchange rates; currency exchange rates may fluctuate significantly over short periods of time. Diversification does not ensure against loss. The inclusion of Environmental, Social and Governance (ESG) factors beyond traditional financial information in the selection of securities could result in a strategy's performance deviating from other strategies or benchmarks, depending on whether such factors are in or out of favor. ESG analysis may rely on certain values based criteria to eliminate exposures found in similar strategies or benchmarks, which could result in performance deviating.

There can be no assurance that investment objectives will be met. Any investment or strategy mentioned herein may not be appropriate for every investor. References to specific companies are for illustrative purposes only and should not be construed as investment advice or a recommendation to buy or sell any security. Past performance is not indicative of future returns.

Active stewardship, as a part of ESG investing, helps align investing with values

We’ve identified five key steps for investment committees to get started on adopting sustainability into their portfolios.

article by Janus Henderson Investors
This piece is approved to use with clients.

Biodiversity loss risks impacting us all, and finance has a key role to play in addressing this global challenge. Janus Henderson’s ESG and Equity Investment Specialists recently conducted a research trip to the Durrell Wildlife Conservation Trust. Bhaskar Sastry outlines the main takeaways and reflections from the two-day visit.