Despite the balancing acts working women must perform and the pervasive gender pay gap, a NBC News-Wall Street Journal poll suggests that 49% of U.S. working women serve as their family's main breadwinner. This number includes an estimated 42% of working women with children. Among women married to, or cohabiting with, a male partner, researchers say 31% are earning at least half of their household income.

While high-net-worth (HNW) women are often cast as passive recipients of their wealth, FlexShares recognizes that these women are primary breadwinners and wealth creators themselves. We wanted to know how women creating their own wealth differed as wealth management clients from their male counterparts and vs. other more broad studies of women as a homogenous group. Our recently commissioned study provided some insights.

When having it all is not really enough

Our findings indicated that while women wealth creators challenge long-held stereotypes to pursue their financial goals, traditional gender norms also make it less gratifying for women to be primary breadwinners. 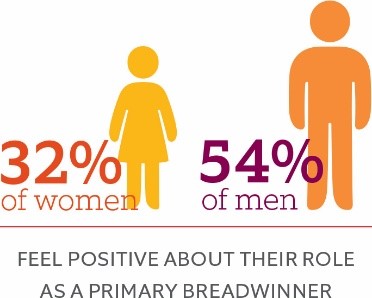 The belief that being the primary earner is more difficult because of the participant's gender was more frequent among those with higher household incomes. The strength of this association was not significantly different among men or women. Respondents of both genders wanted their spouse to contribute more towards household income but this was more prevalent among female breadwinners (women 69% vs. men 62%)

A twist on the concern of work-life balance

Women executives in our survey indicated they were less challenged about work-life balance than their male counterparts. Men felt more guilt about juggling work life demands than women wealth creators. In fact, 32% of men (versus 20% of women) expressed feeling guilty when at home instead of work and 32% (versus 21% of women) reported feeling the same emotion when they were at work instead of home. Nearly three quarters of male primary income earners cited that they take on more than half of caregiving duties (childcare and eldercare) versus only roughly two-thirds of women indicating the same.

At higher household income levels, however, a greater proportion of both genders indicated a desire to outsource child-rearing, elder care and household management. Men (44%), however, were overall more likely to want to do so in comparison to women (32%) said they would be happy or relieved to outsource household management duties. And 35% of men (versus 27% of women) said the same about child-rearing responsibilities.

Perhaps these unexpected findings can be explained by the New York Times' recent (April 2019) exploration of “how the nature of work has changed in ways that push couples who have equal career potential to take on unequal roles." Essentially, the investigation revealed that as women increasingly achieved more higher education, the corporate opportunities that “require those degrees started paying disproportionately more to people with round-the-clock availability." Did escalating workplace demands force more recent generations of ambitious women to become masters of work-life balance?

HNW women and men who are primary breadwinners are as complex and nuanced as any demographic. Advisors should leave behind gender biases and work to understand the personal life goals that drive the client's financial objectives. FlexShares wants to help advisors leverage this tactic to improve the client experience. Download our white paper and follow our weekly posts on this topic.

Before investing, carefully consider the FlexShares investment objectives, risks, charges and expenses. This and other information is in the prospectus and a summary prospectus, copies of which may be obtained by visiting www.flexshares.com. Read the prospectus carefully before you invest.

Please remember that all investments carry some level of risk, including the potential loss of principal invested. They do not typically grow at an even rate of return and may experience negative growth. As with any type of portfolio structuring, attempting to reduce risk and increase return could, at certain times, unintentionally reduce returns.

What Money Matters Keep Wealth Creators Up at Night?

Debt, children's education, dream business, vacation home, retirement. Wealth creators know that smart money decisions hinge upon prioritizing financial goals that compete for a finite amount of dollars. Yet, even for HNW primary income earners, it can be challenging to prepare for the future when money is still addressing the past.

article by FlexShares
Making gender assumptions about your executive male clients may be as risky as making assumptions about their female counterparts. Understanding their responsibilities outside the office can be a key differentiator for you.
Client Experience

article by FlexShares
Be careful about the assumptions you make about female investors. Pink is a color -- not a service model for HNW primary breadwinner women. Find what our research of these women revealed.