Market Insights
Market Outlooks
Print
Share
article by William Blair
This piece is approved to use with clients.

Before and After: How Ukraine Changed Our Outlook

We survived the pandemic and are working through its effects on domestic inflation and global supply chains. We have adjusted to interest rates rising back to the average of the last decade. But just when we thought the world economy was regaining its footing, a military conflict in Europe has led us to reconsider our outlook for growth and inflation.

Most developed-market economies enjoyed a sharp V-shaped recovery post-COVID. The U.S. economy, in particular, was so strong that by the end of 2021 it nearly reached its pre-COVID output trajectory, shown as a hypothetical 2% growth line in the chart below. 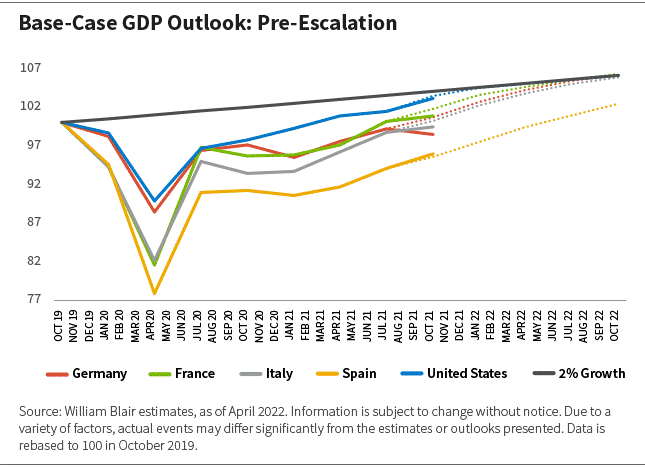 U.S. gross domestic product (GDP) growth—and by extension corporate earnings growth—peaked at 12% year-over-year in the summer of 2021. Long before the Russia-Ukraine conflict, we expected U.S. economic growth to decelerate to a sustainable pace of 2% to 2.5% by the end of this year. In other words, we expected U.S. economic growth to slow down dramatically over the course of 2022.

Consistent with sequentially decelerating economic growth, we believed U.S. inflation was likely to peak this summer and decelerate meaningfully thereafter to a plateau around 3% by the end of 2023. However, we were monitoring wage pressures because they remain a key variable to our U.S. inflation outlook.

A slowing economy and peaking inflation suggested that the corporate earnings growth would decelerate to about a 20% annual pace, which we consider consistent with a healthy 2.5% economic rate of economic expansion.

Putting it all together, we expected that growth in the corporate sector had already rolled over to what we regard as a sustainable rate. We thus expected the aggressive de-rating that began in the second half of 2021 and peaked in January and February 2022 to largely end by the second quarter of 2022.

In light of Russia’s invasion, we developed a framework for thinking about the economic impact of the conflict on the economies outside the direct conflict. Specifically, we assess the impact at the intersection of the two vectors: perceived duration of the conflict and severity of sanctions. The chart below illustrates.

On the horizontal axis we approximate the perceived duration of the sanctions, as a supply response is less likely if market participants perceive sanctions to be of short duration.

On the vertical axis we estimate the severity of sanctions based on their disruptive impact on the global supply chains. For now, we assess the current set of sanctions as moderate, meaning that most principal industrial and agricultural commodity exports from Russia are still allowed to flow into the international markets.

We have already seen insurers and logistics operators shy away from Russian cargo, which has led to more price volatility in the commodities markets. U.S. oil and gas producers are responding to higher energy prices by increasing production. 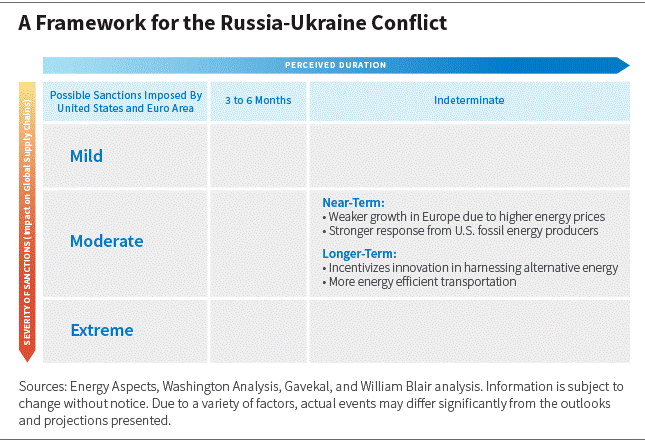 What does all this mean for our growth outlook? In a major change from our pre-escalation scenario, we now expect European economic growth to be materially lower in 2022, with major European economies unlikely to reach their pre-COVID GDP trajectory this year. We expect the U.S. economy to be largely unaffected, at least in the near term.

Regarding inflation, ongoing lockdowns in China and the military conflict in Europe have prompted us to revise our inflation projections. We now expect U.S. inflation to peak later in the year, sometime in early fall, and to roll over thereafter, more gradually. 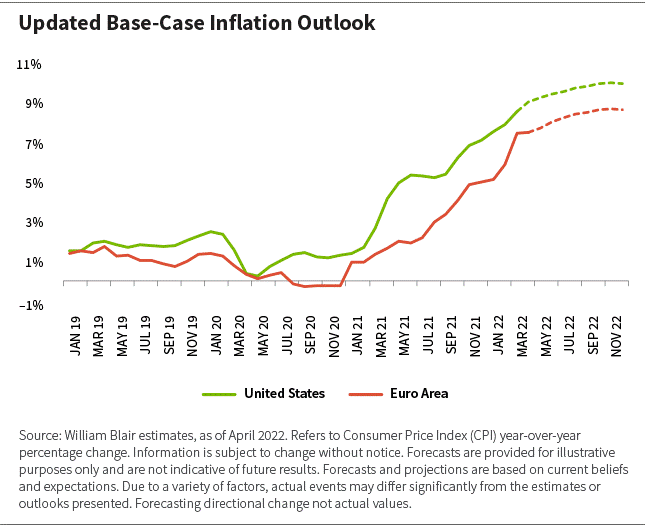 Applying our revised growth and inflation expectations to corporate earnings and multiples suggests that there is further downside pressure to earnings growth, meaning there will likely be further headwinds to multiples. We expect multiples to stop de-rating when growth stabilizes.

Most of these conditions are not in place today. We may see a wider growth differential between emerging and developed markets in the months ahead, but even that condition is somewhat suspect. This is very much a high-level conclusion, and emerging markets are quite heterogeneous, offering varying opportunities and risks. My colleague, Casey Preyss, will discuss the outlook for emerging markets in more detail in another post.

The conflict in Ukraine—regardless of the outcome—is likely to materially increase our attempts to find greener or more sustainable energy sources and accelerate our development of more efficient and environmentally friendly transport.

This is similar to what transpired in the early 1970s, when a number of small European countries took oil transition to heart and became energy exporters within a decade and a half. Denmark is a good example.

The conflict in Ukraine—regardless of the outcome—is likely to materially increase our attempts to find greener or more sustainable energy sources.

It will be tricky, because the energy transition is commodity-intensive. Batteries for electric vehicles and semiconductors for next-generation computing require ever more commodities—not just lithium and nickel, but also copper. Many such inputs come from jurisdictions with different governance structures and social norms.

Moving away from fossil fuels entails geopolitical ramifications. Under the auspices of the United Nations and the Group of Twenty, we may need to rethink how we engage with jurisdictions where the governance structures might be quite different from ours. We must figure out, collectively, how to engage with these countries, involving them in the global economy so conflicts like the one we’re seeing now are less viable and thus rarer.

This content is for informational and educational purposes only and not intended as investment advice or a recommendation to buy or sell any security. Investment advice and recommendations can be provided only after careful consideration of an investor’s objectives, guidelines, and restrictions.

Information and opinions expressed are those of the authors and may not reflect the opinions of other investment teams within William Blair Investment Management, LLC, or affiliates. Factual information has been taken from sources we believe to be reliable, but its accuracy, completeness or interpretation cannot be guaranteed. Information is current as of the date appearing in this material only and subject to change without notice. Statements concerning financial market trends are based on current market conditions, which will fluctuate. This material may include estimates, outlooks, projections, and other forward-looking statements. Due to a variety of factors, actual events may differ significantly from those presented.

Investing involves risks, including the possible loss of principal. Equity securities may decline in value due to both real and perceived general market, economic, and industry conditions. The securities of smaller companies may be more volatile and less liquid than securities of larger companies. Investing in foreign denominated and/or domiciled securities may involve heightened risk due to currency fluctuations, and economic and political risks. These risks may be enhanced in emerging markets. Different investment styles may shift in and out of favor depending on market conditions. Individual securities may not perform as expected or a strategy used by the Adviser may fail to produce its intended result.

Investing in the bond market is subject to certain risks including market, interest rate, issuer, credit, and inflation risk. Rising interest rates generally cause bond prices to fall. High-yield, lower-rated, securities involve greater risk than higher-rated securities. Sovereign debt securities are subject to the risk that an entity may delay or refuse to pay interest or principal on its sovereign debt because of cash flow problems, insufficient foreign reserves, or political or other considerations. Derivatives may involve certain risks such as counterparty, liquidity, interest rate, market, credit, management, and the risk that a position could not be closed when most advantageous. Currency transactions are affected by fluctuations in exchange rates; currency exchange rates may fluctuate significantly over short periods of time. Diversification does not ensure against loss. The inclusion of Environmental, Social and Governance (ESG) factors beyond traditional financial information in the selection of securities could result in a strategy's performance deviating from other strategies or benchmarks, depending on whether such factors are in or out of favor. ESG analysis may rely on certain values based criteria to eliminate exposures found in similar strategies or benchmarks, which could result in performance deviating.

There can be no assurance that investment objectives will be met. Any investment or strategy mentioned herein may not be appropriate for every investor. References to specific companies are for illustrative purposes only and should not be construed as investment advice or a recommendation to buy or sell any security. Past performance is not indicative of future returns.

MarketScape: Why Some Values Strategies Struggle When Value Stocks Surge

Stay on top of changing market environments by learning from their historical parallels.