The 30,000-foot headline message can read that the stimulus payments to individuals will provide additional monies for essential needs and/or to spend on goods and services that would fuel the recovery of the economy impacted by the COVID-19 pandemic. With significantly more cash in the hands of the consumer/household than before the pandemic, along with the trillions of dollars in government spending, it can be argued that the economy is set up for an inflationary period. For this discussion, we will focus on a subset of the overall picture: U.S. households.

One cause of inflation is defined as demand-pull inflation. This occurs when consumer demand for goods and services is greater than the supply. This can occur when the government spends more or distributes money allowing the consumer with additional dollars to increase their spending which can fuel inflation. A fundamental of economics is if there is more money chasing the same number of goods this can be inflationary.

At this time, household cash deposits and net worth have hit all-time highs of $16.5 trillion and $130 trillion respectively. 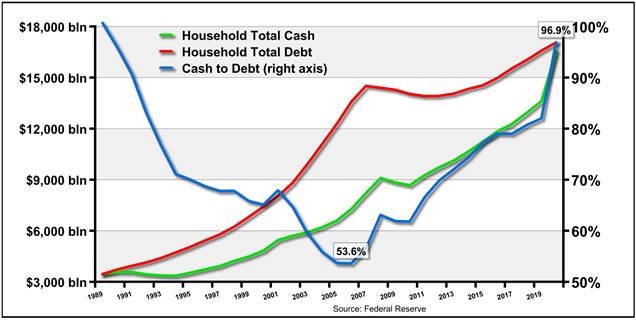 Note on both charts the spike in savings in 2020 and 2021. This can be attributed in part to muted consumer spending due to the pandemic. It also could be the result of the stimulus checks that ended up in savings or paying down debt.

The New York Fed’s survey of how the 3rd round of stimulus checks were spent showed that those that responded expect to save 42%, use 33% to pay down debt and only spend 25% on essential and non-essential services.

Back to potential inflation, it is generally accepted that there is a lot of pent-up demand by the consumer who is flush with cash which feeds into the inflation scenario; again, more money chasing the same number of goods.

So, with so much cash in the hands of the consumer, what are some of the catalysts that may inspire the consumer to take a portion of their cash and pass it through into the system, which was the intent of the stimulus payments, whether that be via travel, home improvements, dining out, etc.?

Posing this question to a few colleagues, a couple catalysts were tabled.

Regarding the economy, it appears to be doing very well with key employment numbers reported just this month.

On 4/2/21 nonfarm payrolls reported an increase of 916,000 in March, far exceeding the consensus of 660,000 with upward revisions in both January and February. Increases in private and manufacturing payrolls were greater than expected and the unemployment rate dropped to 6% from the 6.2% reported the previous month.

JOLTS – the Labor Department’s Job Openings and Labor Turnover Survey – reported numbers on 4/6/21 that the number of available positions increased to 7.37 million, which is a two-year high and indicates employers are looking to hire. The feeling is that as vaccinations increase; employers will look to fill open positions in anticipation of re-openings.

At the end of this 1st quarter roughly 25% of the U.S. population has been vaccinated with the seven-day average of people receiving vaccinations increasing to 2.5 million per day vs. 400,000 per day on January 1 this year. It is expecting that everyone who chooses to get a COVID-19 vaccine will be able to receive the vaccine by summer; just in time to satisfy the various pent-up demands comfortably.

Given the current improving economic and personal health environment, going into the summer we could see consumers injecting some of this cash into the economy spurring growth even higher, possibly putting additional inflationary pressures into play.

What's Next for Value Stocks

We believe that the value rally has room to run and are finding opportunities in select cyclical sectors and dividend payers.

Nobody Likes to Pay More for Stuff. So Why Does The Fed?

Given the shutting down of the economy last year, and the subsequent collapse in demand and prices, the year-on-year comparisons into 2021 pretty much guaranteed a dramatic jump in prices as the economy reopened; stressed supply chains are adding to inflationary pressures.