As fear gives way to resolve and markets assess the potential economic impact of the coronavirus, a risk on mentality has taken hold with global equity markets taking back losses and global bond markets selling off in concert. While these fears are sometimes a bit irrational, the Center for Disease Control and Prevention estimates 12,000-61,000 Americans have died from influenza since 2010, there is no doubt we can all understand the underlying fear. While the ultimate impact is yet to be determined the last week has brought about reasons for a positive outlook and equity markets have responded in-kind. While the number of confirmed coronavirus cases is increasing, at least as of the writing of this article the growth rate looks to be slowing, the number of new suspected cases outside the Hubei province is declining and rumors of potential treatments and/or vaccines have begun to emerge. The Chinese central bank was quick to act to calm financial markets, announcing financial stimulus which should soften the potential slowing of the Chinese economy resulting from the outbreak. It is interesting to note that equity markets both in Europe and the United States have taken back losses associated with coronavirus fears and set fresh record levels. U.S. bond markets have exhibited volatility to the upside over the last week, however, they still have not returned to pre-coronavirus levels. 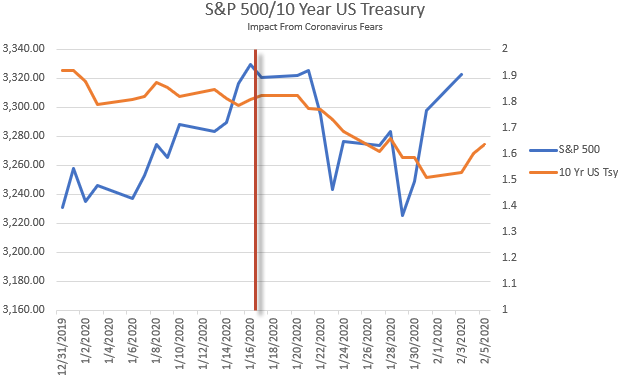 One could infer anecdotally that the possibility exists for higher rates as/if coronavirus fears continue to abate. Where global equity markets have rebounded, the U.S. 10-year Treasury still stands well shy of the 1.92% close to 2019 and mid-January levels in the 1.85% range, before virus fears sent the 10-year rate to a three-month low of 1.51% on January 31, 2020. Furthermore, coronavirus fears seem to have overshadowed a recent economic backdrop that could portend more volatility in bond markets. Bond markets have always had a pessimistic tilt but fixed income – U.S. Treasuries specifically – seem overvalued at these levels relative to the equity market corrections of recent days. Against a labor market backdrop already exhibiting strength, U.S. economic data is beginning to show modest improvement in several key areas, such as manufacturing and housing.

ISM Manufacturing Purchasing Manager Index began last week with a beat moving up to 50.9 for January 2020 from 47.8 in December 2019, coming in ahead the market’s expectation of 48.5. The December print was the lowest since June 2009 and the January number reflects the first expansion of U.S. manufacturing activity in six months. This alleviates some of the market’s fears concerning the trade tensions with China and reverses a trend of weakening manufacturing here in the United States. Further progress was made on the trade front late last week as China announced plans to lower tariffs on $75 billion of American imports as early as this week.

ADP Private Payrolls released last Wednesday pointed to a significant uptick in hiring in January showing a 291,000 increase as firms added the most workers since May 2015. The report came in well ahead of the expected 157,000 increase and was relatively broad-based including strong numbers from small business. The Non-Farm Payrolls numbers released last Friday was better than expected with 225,000 jobs added and pointed to a modest rebound in wage growth on a year-over-year basis. In addition, last week brought about an end to the impeachment saga which, regardless of political leanings, removes some uncertainly and coupled with the Iowa Democratic Caucus stumble seems to leave the status quo as a likely outcome in November which the markets likely prefer.

Abroad, European equity markets set record levels as corporate profits, while meager at 1.2%, stand in stark contrast to declining profits of the last three quarters. As global equity markets retake losses and in some cases set new highs, the recent decrease in global sovereign bond yields has begun to unwind. This reinforces the trend of rising sovereign yields in place since the third quarter of 2019, which in turn takes pressure off U.S. interest rates. The already strong U.S. labor market along with modest improvement in global economic data, the rally across global equity markets and the overall improvement in risk-on sentiment leaves one to wonder if higher interest rates are about more than just fading concerns over the coronavirus.

As equity markets resume their upward march, our fixed income outlook for the balance of the year remains intact.

While we have been speaking on these general themes for some time, recent moves in interest rates only reinforce our thinking. First and foremost, U.S. Treasuries look like the most at-risk asset class in the United States. There continues to be little-to-no reward for taking on duration risk in most high-grade bond markets. Consider the 22-year effective duration of the U.S. 30-year Treasury. The current yield-to-maturity of approximately 2.12% is a meager 9.5 bps (basis point) per year of duration risk. A modest 30 bps move up in rates over a six-month period generates an almost 10% loss on a total return basis for the security.

Viewed from an income standpoint a 10% loss on a 30-year U.S. Treasury holding represents a loss of over four years’ worth of income when one considers the sub-2.25% coupon rates. Longer-dated U.S. Treasuries seem best avoided, in our opinion, and likely one of the riskiest securities at these valuations from an interest rate standpoint. It does bear mentioning that the shorter-term rates associated with securities such as Treasury Bills and tighter structures in the Agency MBS (Mortgage-Backed Securities) market do look attractive to us as a short duration high-grade holding.

One could consider tax-exempt municipals in lieu of U.S. Treasuries for potential safety of capital and income. The recent performance in the U.S. Tax-Exempt Municipal market has been nothing short of astounding and it is showing no signs of slowing. While certainly not immune from interest rate movements the insatiable appetite amongst investors has so outstripped supply that it does provide the potential for some insulation against interest rate volatility. We have seen an amazing 56 weeks of inflows into the asset class and some market observers are calling for a repeat of 2019 performance. While this seems a bit aggressive, we would argue investors should consider municipals over other high-grade fixed income for the foreseeable future when capital preservation and income are paramount.

Finally, there appears to be an opportunity to take advantage of recent credit spread widening in U.S. Investment Grade and U.S. High Yield markets. Credit spreads have widened on risk-off sentiment related to the coronavirus and if the thesis behind the equity market rally remains intact, U.S. corporate credit could follow suit.

U.S. Credit markets, especially the lower grade cohorts, carry the potential for positive correlation to U.S. equity markets. This makes sense given the same underlying economic fundamentals are at work in both markets and the lower the credit quality of the fixed income in question, the higher the sensitivity to equity markets. Thus, it should come as no surprise that lower credit quality U.S. Investment Grade debt and U.S. High Yield debt sold off along with equity markets.

Where equity markets have recovered losses since mid-January, we have not seen credit spreads in the BBB area of the U.S. Investment Grade market and the U.S. High Yield markets recover and they sit at or near the widest in almost 90 days. Where risk tolerance allows, we would take advantage of the sell-off in the credit markets keeping in mind that the lower duration higher coupon stance of these holdings also provides some downside protection on interest rates relative to higher grade fixed income.

AAM was not involved with the preparation of the articles linked to in this commentary and the opinions expressed in these articles are not necessarily those of AAM.

article by Federated
This piece is approved to use with clients.