This week the markets are bracing for what may be the worst economic news in the country’s history. The grizzly data will show what the shutdown of the U.S. and global economies looks like. To be sure, human life and well-being are the paramount concern. However, government actions to stem the contagion of the COVID-19 virus will have an ominous impact on our economy. According to Bank of America Merrill Lynch, second quarter gross domestic product (GDP) could easily dive by 12%. Goldman Sachs estimates the dive could be 24%. Each estimate is unimaginable to most and will likely be a recession for the record books.

The unemployment wave grew in earnest last week as small businesses abruptly shut their doors. These claims are being reported to be coming in by the millions. This Thursday unemployment claims will jump from 281,000 to a number estimated to be north of 1.5 million, according to Bloomberg. There will be plenty of other economic data released, but none will show the damage that has begun in earnest as the United States shuddered businesses en masse.

Financial markets – being a forward pricing mechanism – have fallen off a cliff as the ominous reality of the economic impact has come to light. The Federal Reserve has taken out all stops to supply financial support to markets that have also set new records. Their job is not to reverse the direction of markets but to apply enough liquidity to keep markets from breaking. They do not have the tools to address the coming recession in a more meaningful way. Lower interest rates and repo facilities will do nothing to cure the virus spread.

The tiny virus has proven to be a major frustration to slow as the acceleration period for the United States has just begun to ramp up. There are three areas that we believe will need to be successfully addressed before this nightmare will begin to subside:

1. The acceleration of the infection spread must be slowed. This is the focus of our government and healthcare leaders taking significant actions to shutdown huge parts of the most populated parts of the country. Social distancing is the new normal. Curtailment of large group gatherings, international travel and orders to shelter in place has literally made our large cities ghost towns overnight. As draconian as these measures are, there is credible evidence that it works. Early data show actions taken by China and developed Asia worked to slow the spread. 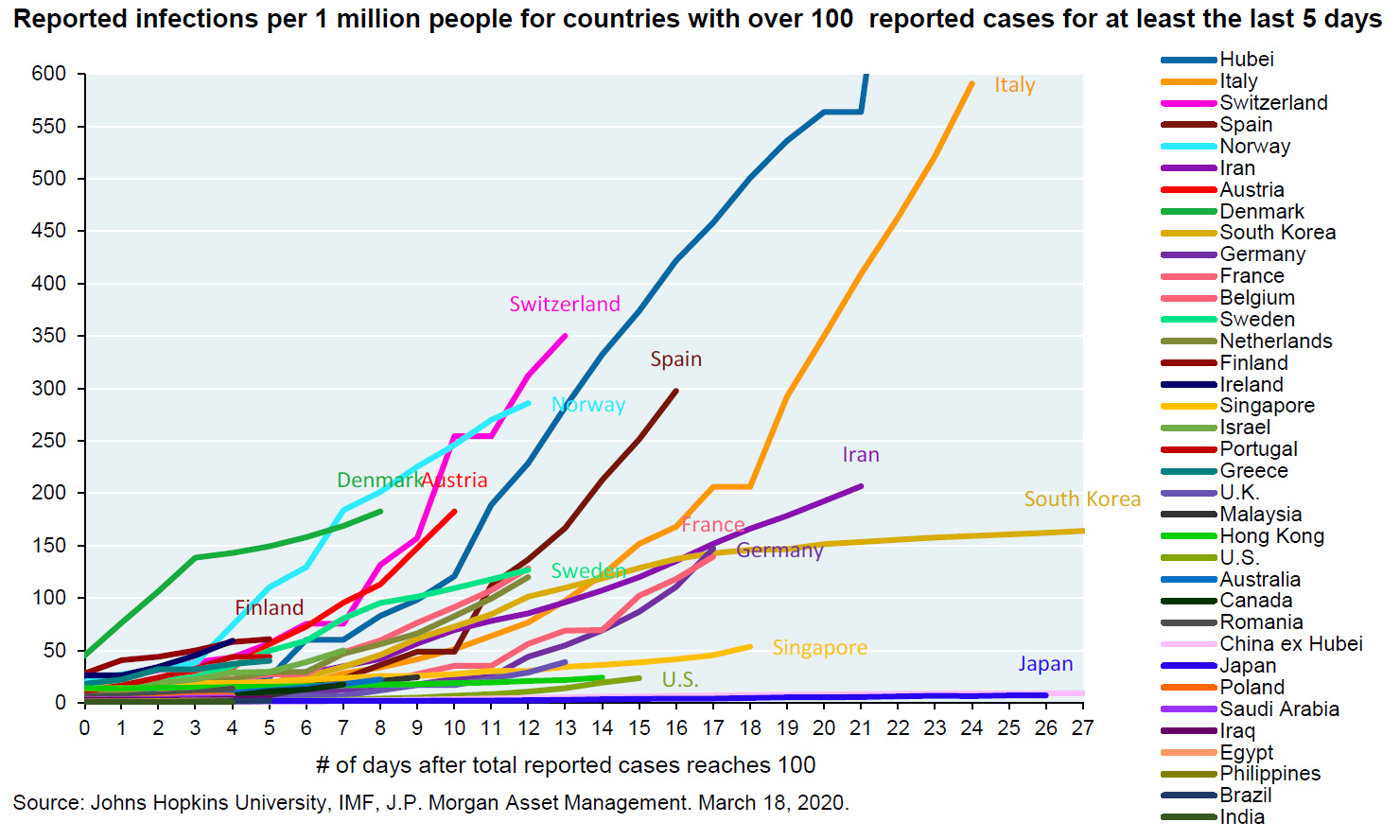 2. Advancement of a therapeutic treatment for those whose who have contracted significantly threatening cases of the virus. There are many therapeutics being tested in real time to determine their efficacy on humans infected with COVID-19. Early results are showing promise. There is a focus on drugs already approved by the FDA for other afflictions that are currently available. These include Remdesivir, a Regeneron Pharmaceuticals drug currently being used to treat rheumatoid arthritis. The second is Chloroquine which has been in use for years as a treatment for the prevention of malaria. This drug, when combined with azithromycin, has really shown significant efficacy in eradicating the virus in just a few short days. We have heard the comments from President Trump pressuring the FDA to approve two relatively common drugs already on the markets that have shown very promising results in stopping the virus. We think the FDA will move quickly to provide emergency approval for these drugs that have already received clearance for other diseases.

There is a myriad of other drugs being tested. Our point here is not to opine on which treatment will prevail but only to point out that there are current compounds in production and available now that show large promise.

3. The fiscal impact of this global economic shutdown needs to be addressed immediately. The nearly unanimous effort here is to use the government’s ability to create massive and immediate stimulus. That is the subject of Congress’ convening over the weekend to pass legislation that will deploy needed cash to all corners of the U.S. economy. The major parts of the legislation will be in support of individuals with direct cash payments and bigger unemployment benefits, and in support for small businesses through direct loan guarantees with limited forgiveness through the SBA and significant support for other industries in the United States through a combination of equity infusions loan guarantees. The sheer size of these aid packages would have been unimaginable by most just a few weeks ago.

If we can accomplish these three huge undertakings quickly, history shows us that the economic bounce back can be just as significant and impressive as the cliff dive down. I recently wrote about trying to model a major global pandemic and financial market performance. The most significant and documented pandemic in modern times is the Spanish Influenza outbreak of 1918. The lessons we learned in 1918 centered around quick and aggressive public health response. These lessons were ignored in Wuhan initially where public healthcare officials reportedly muzzled doctors who tried to warn of the outbreak they were seeing. Quick response equals better outcomes. 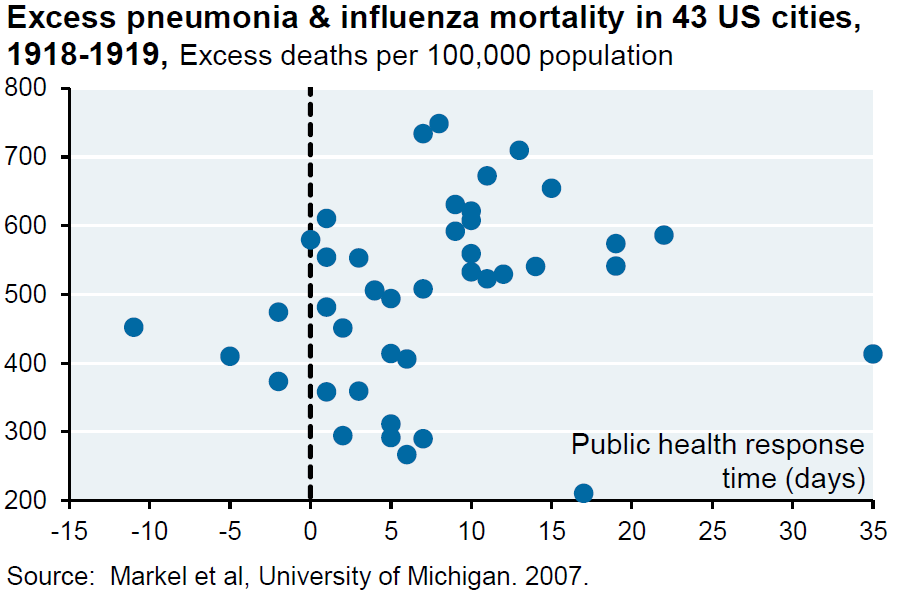 We have seen several financial markets deteriorate at record pace. The most common question is, “When will our financial markets recover?” Our intuitive answer to this question is that investors should wait to see how this plays out and that they should seek safety and remain patient. However, the data of previous financial catastrophes is clear: the market will see the end of the crisis long before people start recovering. In my previous commentary, Investors Fear the Virus. Markets Fear the Panic., I showed that the downturn in the Dow Jones Industrial Average in 1918 was shortly followed by a bottom that occurred long before people started getting better from the Spanish Flu. In fact, in most financial catastrophes the markets turn-up even as the data continues to get worse. The counterintuitive tends to be the rule. The financial markets have this uncanny ability to see the cure well before most investors.

Note the charts below sourced from J.P. Morgan show the cycle of disaster, ruin and recovery tend to rhyme over and over throughout history. Their work studied several economic collapses in history. They included crises that played out over long periods of time versus those that ended quickly. Their conclusion was that recovery always came and the time to recovery was in proportion to the length of the severity of the collapse. We are not trying to opine on their work, but we do believe their conclusions are relevant.

Goldman Sachs has issued a prediction that the S&P 500 Index – closing last Friday at 2,305 – may bottom around 2,000. They predict a year-end recovery at 3,200 or just 170 points below its all-time high. We don’t have a crystal ball that would validate Goldman’s numbers, but we would simply note the proximity of the markets to their predicted bottom and the size and relative speed back up over the next 8-9 months.

Here are some prescient examples. The first show that high yield markets tend to bottom well before defaults peak.

Next, we see that the bottom for bank stocks tends to be well before the peak of bank failures.

This coming week will begin the deluge of horrific economic data as the U.S. economy comes to a grinding halt. The stoppage will likely be temporary, but risks remain that the closure could take longer than estimated.

Our intention in this commentary is to outline our best guess on the short- and intermediate-term map of what events will need to take place for the current COVID-19 pandemic to crest and begin to subside. We are not epidemiologists and do not profess to have any training or knowledge that would give us a credible edge here. All we are trying to point out is that their huge progress on government and social engagement that is resulting in a huge change in behavior.

We are highly confident that our pharma and biotech companies will quickly address both the therapeutic need to cure people quicker, as well as the development and deployment of an effective vaccine. They have accomplished this outcome countless times before (i.e. SARS, Ebola, etc.). At times like this, look for the red tape to be eliminated and emergency approvals immediate.

There is also significant realization and actions that are being undertaken by the Federal Reserve to maintain working markets and by Congress and the White House to engage colossal fiscal stimulus. All their engagement actions are colossal based upon anything ever done before. We think colossal actions will likely result in colossal results.

Finally, we note that in prior financial and human catastrophes, markets find their footing much faster than the data will show progress. That is why timing the markets is so difficult. Markets tend to find clarity much earlier than their participants. We don’t profess to know where the bottom will finally be, but from a historic perspective it might be closer than most believe.

Global manufacturing and services improved sharply, but some U.S. states are pulling back after virus infections increased.

Investment Strategy Commentary: Will the V Become a W?

The V-shaped economic recovery faces a significant challenge with the rise of coronavirus infections in a number of U.S. States.

Weekly Wire: With apologies to the Dave Brubeck Quartet, here’s our “Take Five”

report by Brinker Capital
This piece is approved to use with clients.

Even casual fans of jazz – which we believe to be the great American art form – can easily recognize the opening cords to The Dave Brubeck Quartet’s classic, “Take Five.” Released in 1959 and penned by the quartet’s alto saxophonist Paul Desmond, “Take Five” was the first jazz single to sell one million copies and is the biggest selling jazz single of all time. So, with apologies to the great Dave Brubeck and The Dave Brubeck Quartet, here is our “Take Five,” or five things we think are worth thinking about as we move into the second half of 2020.