Global government debt is estimated to have increased a record $10 trillion in 2020 to $77.8 trillion, equivalent to 94% of world GDP. The previous $10 trillion tranche took seven years to build, from 2012 to 2019, so the increase in debt and the short amount of time it took to create it will both be records. The rapid and widespread increase in debt has had a significant effect on sovereign credit ratings, with a record 51 downgrades of 33 sovereigns in 2020, 27 of which are emerging markets.

The huge amount of money printed in 2020 has been treated with complacency by the bond market. However, the signs of improved household balance sheets (at least nominally) are leading some economists to warn of a possible spike in inflation.

Recovery and reflation have been key themes driving a constructive credit outlook for 2021. During the second half of 2020 we focused on the recovery narrative amid uncertainty in the economy. Since then, the economy appears to be improving, vaccines are being distributed and optimism about further fiscal and monetary support exists. The concern about rising rates for credit is driven by the fact that valuations are currently very rich and duration exposure provides little cushion against a rise in Treasury yields. The spread of the U.S. Investment Grade (IG) Index is at the tight end of its historical range hovering near 100bps, the Option Adjusted Spread (OAS) was wider than the current 97bps 96% of the time over the past 10 years.

In the investment grade market, the average OAS of the ICE BofA Merrill Lynch Corporate Index tightened by 6bps in 2021 and stands at 97bps with the BBB Index tighter by 9bps at 121bps. In the high yield market, the BofA Merrill Lynch High Yield Master Index tightened 39bps YTD and sits at 347bps. This is the tightest level the high yield index has registered since January 2020 before the pandemic pushed spreads to 1087bps on March 23.

We wouldn’t expect much more spread tightening, but we also don’t anticipate significant widening in the near future. This forces us to identify issuers or sectors that may be out of favor and offer a compelling value. The real yield on the IG Index recently turned negative for the first time in history with the rise in the breakeven (BE) inflation rate above 2%. The 10-year BE is now 2.23% (highest since June 2014) and the real yield is currently well inside the long-term average of 2.15% and the post Great Recession of 1.46%.

Despite the headwinds of 2020 and the borrowing binge it created, median net leverage for IG issuers only increased 0.2x, indicating that significant amounts of cash are sitting on the balance sheets. Refinancing will remain cheap even if rates rise another 30-40bps. Issuance for January has come in at about $130 billion, a strong start despite the record levels in 2020. Issuance is about $10 billion behind 2020 and roughly in line with the five-year average of $138 billion.

Yield as a Percentage of Duration

The “Sherman Ratio,” named after DoubleLine Capital Deputy Chief Investment Officer Jeffrey Sherman, shows the amount of yield investors earn for each unit of duration. The ratio is meant to calculate what percentage increase in rates will offset yield and is calculated by dividing yield by duration. It tumbled to a low of 0.19 at the end of 2020 for the Bloomberg Barclays U.S. Corporate Bond Index, a record low in data going back more than three decades. That compares with the previous low of 0.34 in January 2020. 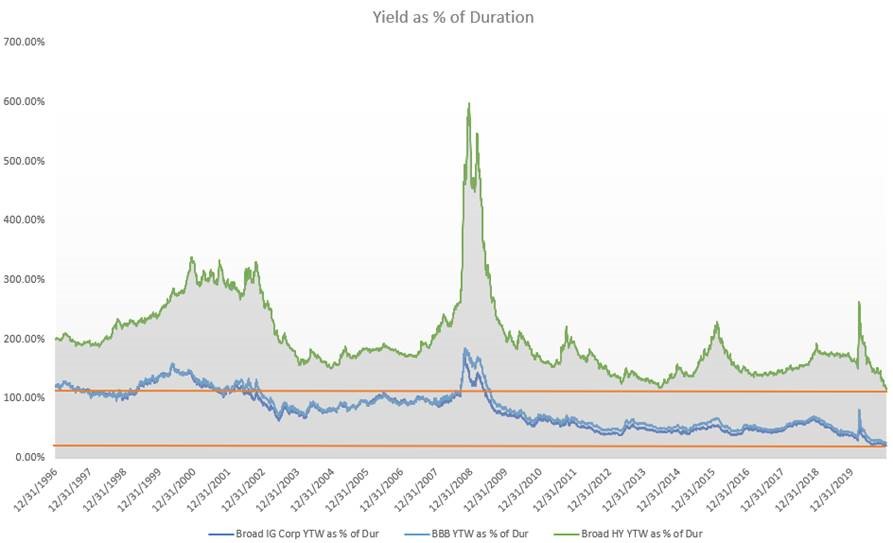 Source: ICE BAML Data Indices | Past performance is not indicative of future results.

Long-term Treasury yields have been rising much faster than short-term yields, a sign that investors are expecting further acceleration in the economic recovery. The yield curve is the sharpest upwardly sloping in years. That’s a result of the benchmark 10-year Treasury recently reaching 1.30% and the 30-year bond at 2.08%, both at the highest levels since February 2020 and roughly double their lows last year.

This is a classic indication that the bond market is anticipating stronger economic growth and higher inflation. Those expectations got a boost after both Houses of Congress voted to begin the process of approving President Joe Biden’s $1.9 trillion fiscal relief plan without votes from Congressional Republicans.

The doubling of yields in the 10-year and 30-year U.S. Treasuries has the 2013 Taper Tantrum coming up in conversations as a reference point for duration risk. Headwinds around the Taper Tantrum stemmed more from a lack of clarity in communication and lack of precedent. Therefore, the market was not able to distinguish between tapering and tightening. This time, the Fed has communicated there will be a long runway for communicating intentions before making the move.

Even after an astonishing 2020, there are many positives; the economy is improving, and the 4th quarter advance GDP release revealed 4.0% growth in the quarter and a 3.5% drop in the year. The biggest annual drop in GDP since 1946, but we can take some solace in the fact the entire decline was in March and April. GDP fell 10.2% (not annualized) in the first half of 2020 and rose 10.0% in the second half.

Personal income rose 0.6%, handily beating the consensus forecast of 0.1% and savings rose in December. The saving rate increased from 12.9% to 13.7%. Personal savings for all of 2020 amounted to $2.9 trillion, more than twice 2019’s $1.2 trillion. As to where the money went…look at checking account deposits. It's estimated that there is nearly $5 trillion sitting in cash. This is significantly above the $3.8 trillion back in January 2009. This much cash on the sidelines leads us to believe we have a coiled spring ready to explode as soon as we get closer to full rollout of the vaccines and herd immunity.

With High Yield debt below 4% for the first time ever, yields are obviously still very low. The record-low yields are accompanied by high duration levels and pose a significant risk for investors. Duration management and credit selection are more important now than any time in recent memory. This is the time to know what you own and understand where the risk lies in your fixed income portfolio. Active managers will diversify portfolios across asset classes, sectors, maturities and tactically adjust duration as needed. Our playbook is telling us to evaluate opportunities to bring in duration, beware of tight spreads, review corporate exposure and stress test portfolios. This approach has the potential to allow fixed income investors to stay invested in volatile markets and provides a ballast to equity exposure in portfolios.

The energy-inflation connection can't be ignored

article by Federated Hermes
This piece is approved to use with clients.

There's only so much innovation can do as accelerating growth drives up demand.

article by Federated Hermes
This piece is approved to use with clients.

What if Biden gets most all of what he wants? Is the market ready?