AAM Viewpoints: Key Determinant of Severity of a Recession the Degree of Market and Economic Liquidity

In the book “A Brief History of Doom” by Richard Vague, he lays out that since the 1800s there have been six different types of financial crises: external and internal sovereign debt, stock market, inflation, currency and financial or as he details, lending and private debt. What would we properly classify the pandemic economic shutdown and corresponding recession that transpired? One can argue that some of the classifications will arise from the sudden halt of the economy rather than the catalyst.

So, we are left to grapple with economic events that are five standard deviations wide, which statistically tells us should occur 0.00006% of the time. These occurred regularly in the labor, uncertainty, earning revisions and consumption metrics. In psychology, the theory that everything is connected – and has been debated for over 50 years – is called the Crud Factor. The belief is that everything is interconnected, one just needs to find the bridges that connect them all and we find this in the ever-constant debate of the financial, social and political world. Individuals have a great desire to remove volatility in their life yet will also engage heavily in those mediums that increase consternation. Welcome to the fascinating and frustrating component of human beings in which we are often our own worst enemy, no matter how much we project external faults for failures and internalize our successes.

When you are left to deal with this type of variance, a new stance for clarity is needed. It seems the disconnect between asset prices relative to the economic metric has left many fundamentalists in an unenviable position of being confused about the behavioral component of market levels. The more married to a narrative one becomes, the easier it is to separate from reality.

Attempting to make sense of…not so much where we are now but what may transpire, we are forced to expand our viewpoint or reduce the level with which we evaluate the current position. As we have attempted to do for a long time, trying to find those areas that are overlooked by the many often can create the opportunity they have overlooked. Currently the market and the economy appear to benefit from more of a schoolyard component than a classroom. By schoolyard we target basic rudimentary math and more parochial analysis.

It is our experience that the key determinant of how severe a recession or downturn becomes is the degree of market and economic liquidity. There are many forms and minutia that can be monitored, however, let’s look at some of the broader measures.

In the recent Fed Flow of Funds, the total level of cash equivalents in the Household and Nonprofit balance sheets totaled $14.54 trillion. Total liabilities totaled $16.64 trillion, which gives us a cash-to-liabilities of 87.40%. Without context, this may portray an example of how one can interpret it to confirm their positions. What one finds is that this high level of liquidity as a percentage has not been seen since 1992. 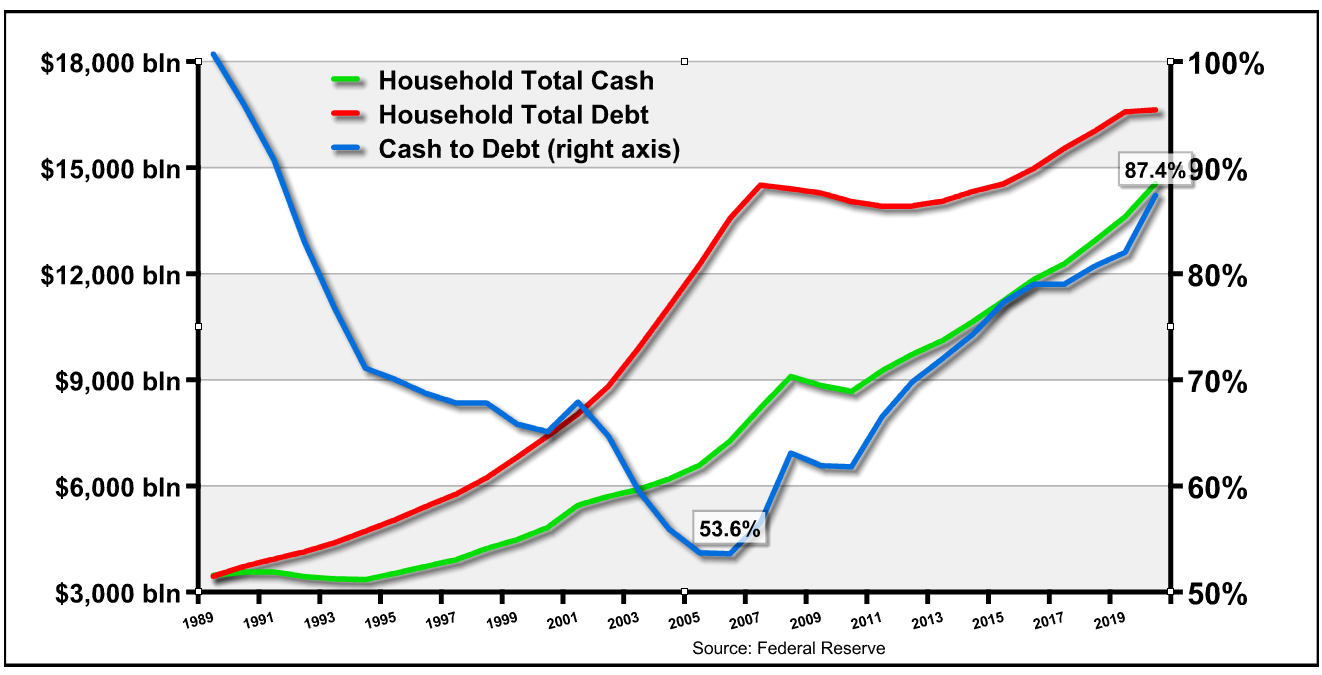 Since the onset of the Great Financial Crisis in 08/09, households have been building more cash reserves at a greater rate than debt. Even if we take the first quarter of 2020 relative to the end of 2019, one can see an even greater degree of this. Total liabilities increased just under $100 billion while the cash equivalents rose just under $1 trillion.

A more interesting dynamic that appears to have been lost in the myriad of doomsday headlines is the rate at which consumers have been requesting credit cards, hitting a seven-year low according to the New York Federal Reserve. 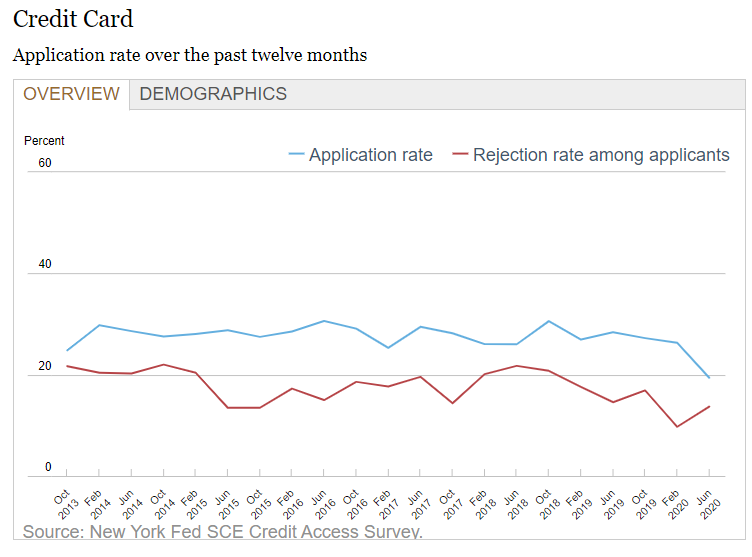 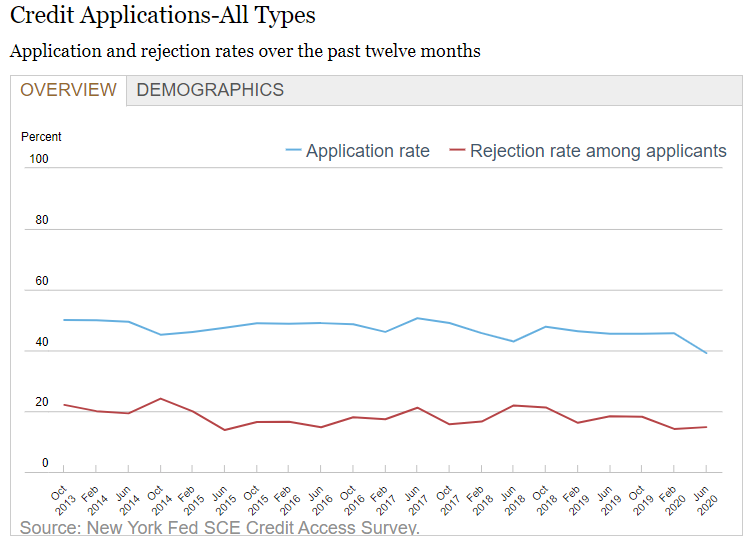 The most comprehensive level of liquidity lay in the broad measure of the money supply. In using a base currency of U.S. dollars, Global M2 has risen by $6 trillion if we exclude China and $8 trillion if they are included, according to JP Morgan. This equates to roughly an 11% increase so far this year. While like the Great Financial Crisis, they make note that this is a much quicker response and estimate that possibly by the middle of 2021 the total increase could be $15 trillion.

So, while the wall of worry is massive, so too is the flood of liquidity that is there to meet it.

From a base economic component, the amount of the global central banks’ response has been as equally as massive relative to the last time we saw a coordinated global response. While we are seeing the initial programs run us from the fiscal and monetary side with many different programs being discussed, the initial amounts were massive in scale.

During the Great Financial Crisis of 08/09, advanced economies provided economic stimulus of 3.4% of GDP. Compare various countries from 08/09 to the current stimulus.

Currently across the European Union total stimulus is roughly 4.3% of GDP. Japan has said publicly that they may provide up to 40% of stimulus to backstop the economic downturn. One of the most important notes is that this is stimulus only, not including the benefit of the massive amount of quantitative easing that is being implemented by central banks as they purchase debt, equity and various other assets to prop up liquidity in markets.

What may be of interest is where the G20 allocated the various stimulus in 2008 and 2009 and how each country went about it in their own unique ways. 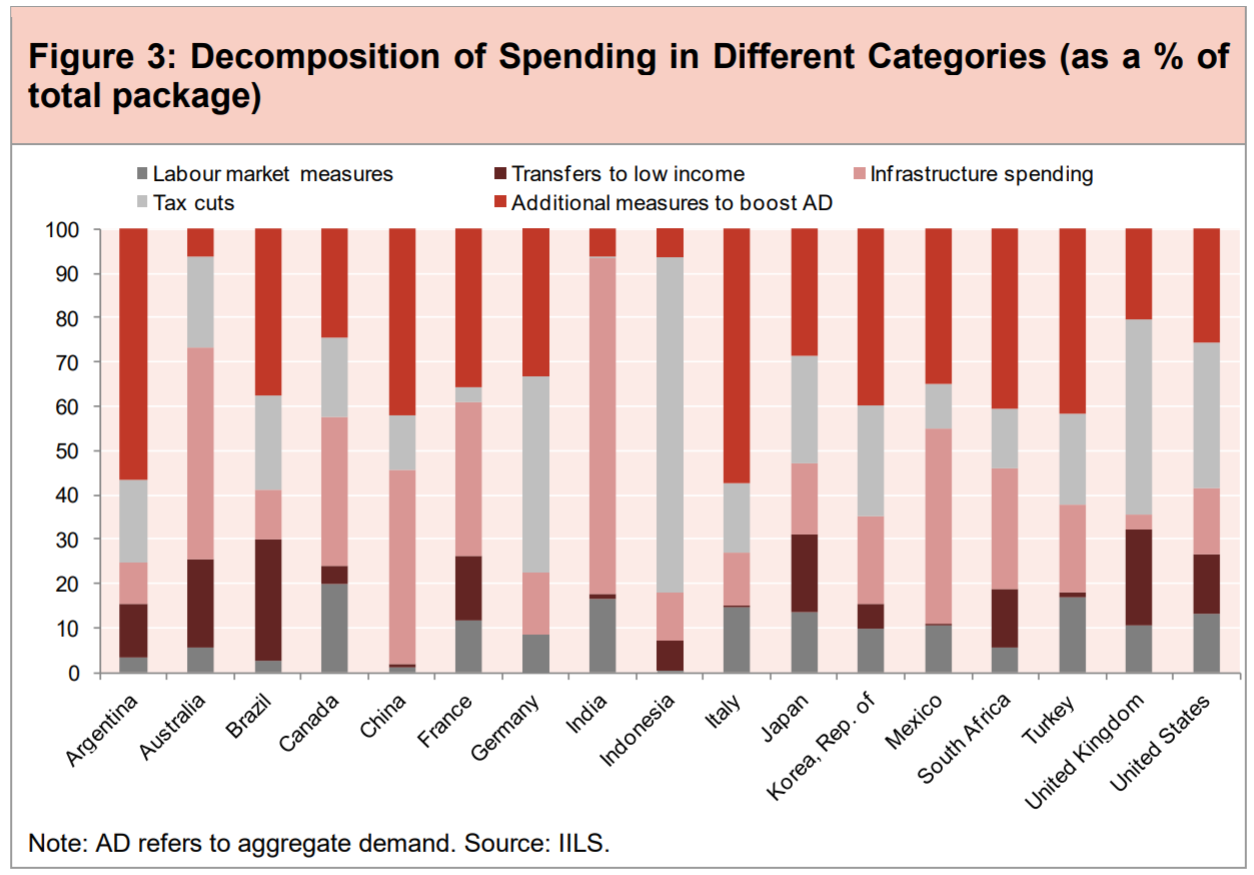 According to the metric below, the United States stimulus package is nearly 50% greater than the value of 12% of GDP and has a large amount of stimulus yet to be distributed. 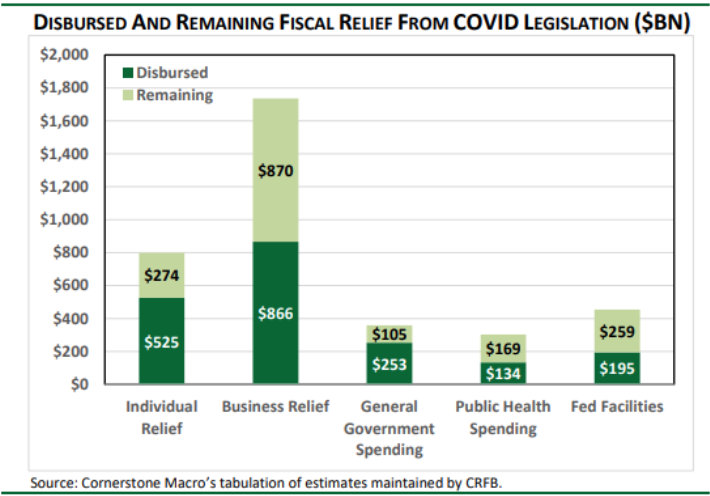 So, while the cash and stimulus are massive, the conundrum of many is that the markets are not representing the economic calamity while disregarding the amount of defensive measures that have taken place. Many may attempt to explain the increase in retail as the sole reason for the recovery in the Bloomberg U.S. Stock Market Capitalization that rose from its low of $23.6 trillion to the currently level of $34.7 trillion. I am not sure you can make that leap with the numbers considering that the increase in margin in retail accounts in June increased only $65 billion. Therefore, while retail accounts have proliferated, those in charge of allocating cash to risk assets have taken a far more defensive approach.

The Bank of America Merrill Lynch Global Fund Manager Survey continued to show elevated cash levels throughout the onset of the current crisis. Cash levels stood at 4.9%, and though off their highs of nearly 6%, they are still in the contrarian buy territory. Anything above 4.5% marks an overly bearish or cautious fund manager and is a contrarian buy signal. The most notable of the last decade is that the average cash balance of the Global Fund Managers surveyed was 4.7%...or a perpetual state of overly cautious standpoint.

JP Morgan attempted to even expand the view of where non-bank global investors are allocated. By eliminating the bank investment component who may purchase solely on collateral purposes and not evaluating risk/return metrics, they arose at a massive disparity in the allocation to bonds, equity and cash. They concluded that globally, there is $36 trillion in bonds, $63 trillion in equities and $59 trillion in cash. That level of cash is one of the more profound justifications for allocating to risk assets, such as equities, when we have 50% of the S&P 500 companies dividend yield is above corporate bond yields. In Europe it is even more profound in that over 70% of the EURO STOXX pay dividends at a greater yield than the corporate bond equivalent.

As such, we see an opportunity in the risk assets across the globe more than the risk-off assets. We would dial up value relatively that is as much a contrarian move as it is a hedge against the huge underperformance gap it has had with growth. This is to offset the immense disparity of the growth and tech sector the last few months relative to the value sectors. This disparity has never been as wide as we have measured the S&P growth index relative to the S&P 500 value index. 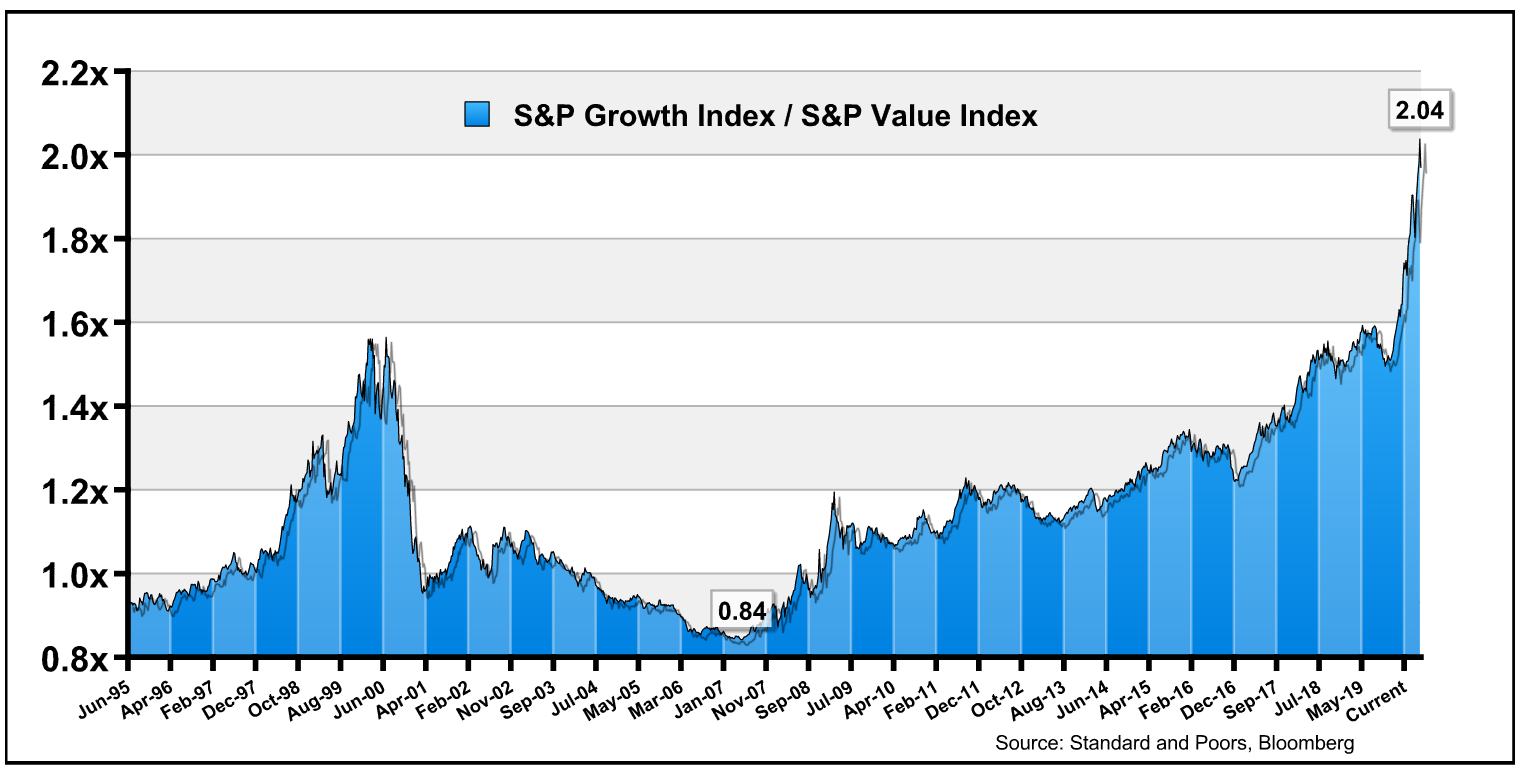 Past performance is not indicative of future results.

When we find ourselves at a point of rewriting history as irrelevant and stale, it often has a knack for resurfacing that leaves the new paradigm prophets at a loss for why. It is said we see what we think and feel and not what we are looking at. Behind the façade of this historic economic calamity and proliferated negativity, there are reasons to be optimistic for the longer term…. Easier said than done with the daily data deluge.

Opinion in articles linked to in this commentary are not necessarily those of AAM.

For informational purposes only and not a recommendation to purchase or sell any security. Investors should consult their financial professional.

Learn about the 6 common drivers of unexpected portfolio results uncovered during our four-year, aggregated global analysis of more than 200 institutional equity portfolios.

2021 Outlook and Forecasts Across the Investment Portfolio

How we think equities, bonds, real assets and interest rates stack up for investors in 2021.