While we have previously mentioned, I feel it is important to revisit the race between the results of the FOMC’s (Federal Open Market Committee) model-driven restrictive policy in 2018 and the potential recovery borne of the Fed’s 2019 mea culpa.

Recent history shows the FOMC does not have a good batting average when forecasting inflation. For reasons which may be described as institutional bias, model fixation, or simply groupthink, the FOMC consistently missed their inflation forecasts for the past eight years. Four rate hikes from 2015 to 2017 were done to contain what the FOMC saw as burgeoning inflationary risks. At the time – and even at present – it seemed fair to say that these early rate increases were justified. You may recall that at the time core measures of inflation, such as PCE (Personal Consumption Expenditure), were hovering above 1.50%, average hourly earnings were finally exhibiting upward pressure as they began to grow at a 2.50% clip over the prior year, and inflation breakevens were consistently near 2%. The FOMC was predisposed to have a hawkish bias though meeting statements consistently mentioned their “data dependency.” At the time, markets also felt that inflation had the potential of heating up so these initial rate increases were not seen as anything unusual.

In early 2018, the 10-year benchmark Treasury broke above 3% convincingly in early 2018 and wage inflation rose to nearly 3% by the summer driven by several healthy jobs reports and job growth in goods-specific sectors. Labor markets appeared to turn the corner from the consistent declining average levels of the prior 16 months.

As a result of these improvements – and in the face of PCE inflation moving from 1.72% to 2.03% in Q1 – the FOMC embarked on a series of rate hikes in 2018 that nearly undermined the fragile nature of the recovery. Transitory forces were somewhat responsible for the PCE’s climb to 2%, and the early year rate hikes by the FOMC were expected as they were supported by some of the data at the margins. However, the rate hike in June, two additional hikes in September and December, and a series of confusing communications during the final quarter illustrated that something was amiss with the FOMC’s concept of data-dependency.

On December 19, 2018 when responding to a reporter’s question about the clear disconnect between inflationary data and the FOMC’s actions, Chairman Powell responded, “Policy at this point does not need to be accommodative. It can move to neutral. It seems appropriate that it be neutral. We’re now at the bottom end of the range of estimates of neutral….” 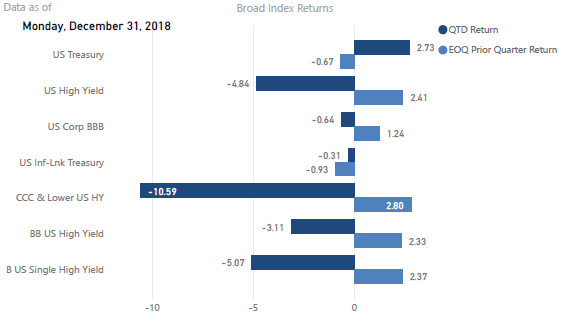 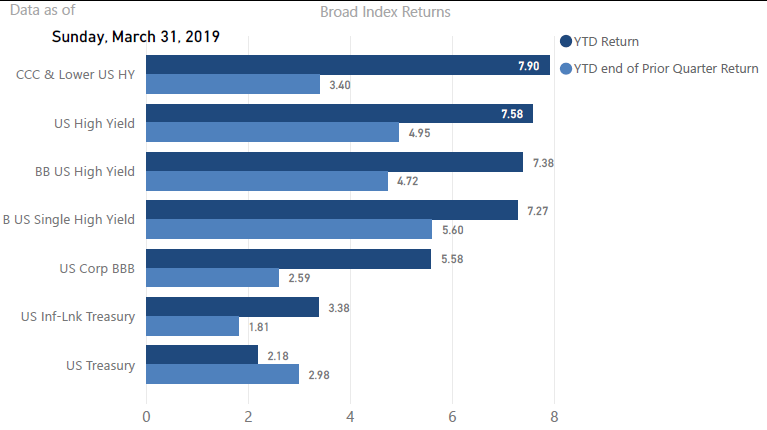 The markets quickly adjusted through the fourth quarter of 2018 as it became clear the FOMC was making a series of mistakes and likely crushing the expansion. The market’s reaction suggested that the FOMC may have been missing the forest for the trees and unfortunately suffering, like many institutions do, from institutional bias or groupthink.

Additionally, the adverse impact of balance sheet normalization (i.e., incrementally reducing reinvestment of maturities) was either misunderstood or simply incorrect as the additional restrictive implications likely exacerbated the final 2-3 rate hikes of the year. However, at the December 19, 2018 press conference Chairman Powell was clear it was not a concern of his, saying, “I think that the runoff of the balance sheet has been smooth and has served its purpose. And I don’t see us changing that.” The committee soon felt otherwise.

On January 4, 2019 Chairman Powell spoke to the American Economic Association and offered this mea culpa: “We’re listening carefully with sensitivity to the message that the markets are sending and we’ll be taking those downside risks into account as we make policy going forward.”

With those few words, Chairman Powell illustrated that the FOMC got the message. Growth was clearly at risk as a result of their actions. The race was on. At that moment, the economy was in a race between the lagged effects of tight monetary policy and more dovish, growth-focused policy. One could argue that the FOMC did not cut rates soon enough in 2019, but as of the first quarter of 2019 returns show, the markets took comfort that the FOMC saw their mistake, expressed interest in unwinding that mistake through eventual rate cuts.

Monetary Policy is transmitted into the broader economy with a lag. This lag is a reason that in late 2018 many people felt that a recession was a growing possibility for 2020. International trade tensions, and global economic weakness influence the U.S. economic growth, but the biggest risk the United States faced in 2018 was that of a hawkish FOMC hiking into a fragile economy.

As the adverse effects of restrictive monetary policy were transmitted into the broader economy in 2019, broad pockets of weakness could be seen, most notably in cyclically sensitive sectors; housing, C&I (Commercial & Industrial) borrowing, good production, and associated labor sector. Some of this weakness is illustrated by the “demand growth” responses from the Fed Senior Loan Officer Survey. 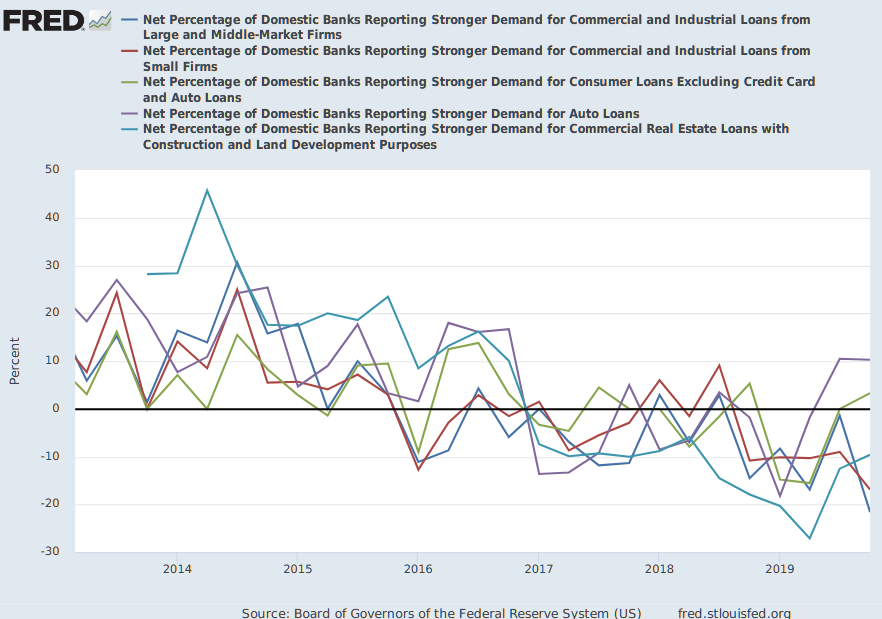 Goods-related labor markets also reflect the cyclical sensitivity to tighter monetary policy. Coupled with international trade headwinds faced by many of these types of firms, jobs were added at a much less consistent rate throughout the breadth of 2019. When we consider a cyclical rebound resulting from the FOMC’s accomodative stance, we would expect these sectors to respond positively as a result. As good-producing labor accounts for the largest portion of average hourly earnings, this may also drive improvements in wage growth. 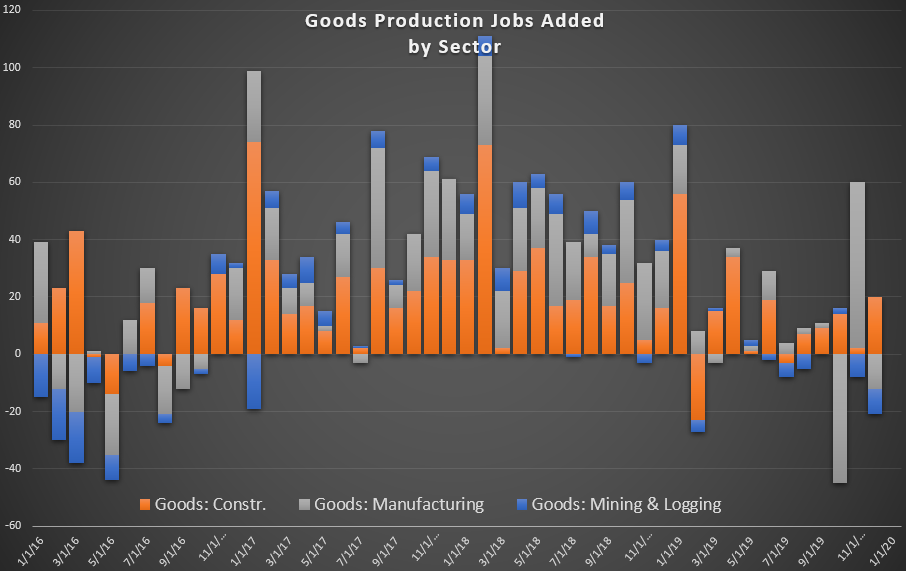 The housing market is another cyclically-sensitive component which was adversely affected by the FOMC’s restrictive policies and housing starts and new home sales illustrate this cyclical sensitivity. In the graph below sales and starts began to wane in 2018 as a result of higher rates. While single-family home supplies had been increasing consistently over the prior few years, tighter monetary policy began driving rates higher and consumers stepped back from these types of large purchases in response. This derth in demand drove supplies to their highest monthly level since 2011 as sales softened. However, as can also be seen to the right, as the FOMC communicated their changing focus, housing recovered and any improvement here illustrates strength in additional discretionary consumption. 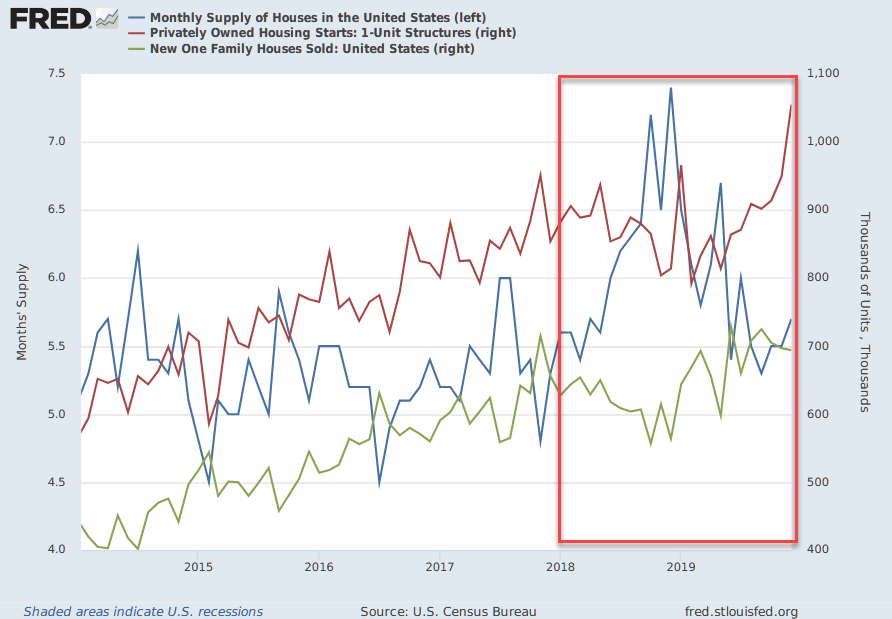 Though pithy, it is not untrue that the level of noise surrounding intelligent and appropriate investment management is only getting louder; spreading contagion in Asia, ongoing impeachment efforts, supply chain disruptions, ongoing trade tension, the finalization of Brexit and Megxit, India/Pakistan tensions, trillions in negative yielding debt. It is difficult to see that just beneath the surface, at the margins, is some improvement in domestic economic activity. While interest rates and inflation may be stuck in a gravity well of lower for longer, the fact remains that it is possible the FOMC has engineered a third soft landing in modern central banking history. We aren’t out of the woods yet, but marginal recoveries in cyclically-sensitive sectors seem to suggest the late innings may just go on a bit longer. As a result, we maintain our allocation to assets which can benefit from cyclical strength.

article by Federated
This piece is approved to use with clients.