AAM VIEWPOINTS: THE CORONAVIRUS IS DIFFERENT – SO TOO ARE THE FINANCIAL CONDITIONS

The current situation is not only unique, but so too is the unprecedented one-sided trend of market reactions. From a medical perspective, the investor is left with but a few ultimate scenarios. While acknowledging the range of opinions vary greatly, they are all ultimately based on our personal reaction to heightened levels of uncertainty.

This commentary is not meant to minimize the extreme severity of the situation, but rather to try to frame the base moves in the market from the most basic emotional components and the corresponding market metrics and where they place historically. On the economic front, we must assume based on the recent market reactions is that a recession is eminent, jobless claims will swell to historic levels (peaked 05/29/2009, one month prior to end of recession), GDP numbers will decline on a historic basis for the next quarter or two and revenue for corporations and municipalities will be strained.

Maslow’s hierarchy of needs has seen a surge in relevance. The focus on the physiological needs has been thrust into the primary focus for the entire globe and this has had a profound impact on the markets. 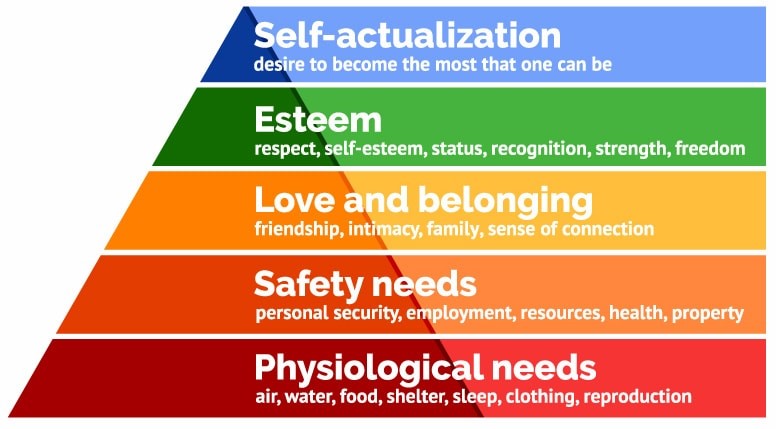 As we attempt to come to grips with the physiological needs where they were once assumed, a recalibration takes place. Recalibrations are always painful, but ultimately almost always become cathartic in the long-term progress of humankind.

Many may remember our presentation on Behavioral Finance and the multitude of behavioral biases that influence us. We can break these biases into two categories: cerebral and emotional. It is my experience in heightened emotional states, logic – no matter how irrefutable – does a very poor job in offsetting the emotional biases.

One of the better representations of this was done in The Journal of Wealth Management winter of 2017 article, “Prevailing Behavioral Biases and Investor Profiles: A Survey of Professional Investors.” It was a tremendous research piece describing how investors are vulnerable to Behavioral Financial biases. 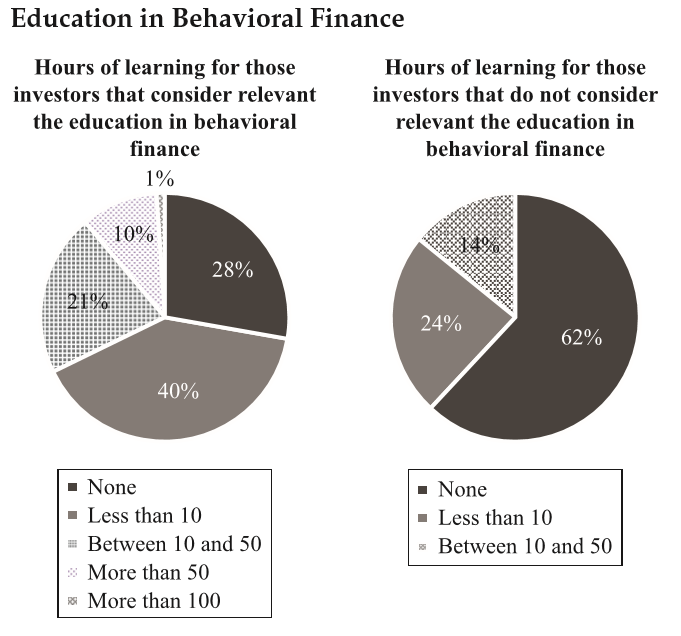 They then broke it into the cognitive and emotional biases and what the four most dominant biases exhibited.

While there are many conclusions, focusing on events like the current one determines we must focus on the emotional component. As they point out, in the “short term, when a public-relevant event takes place, 90% of investors tend to overreact to just 6% under react and the remaining 4% determine that they act rationally.” Consider the table relative to one event and various events. 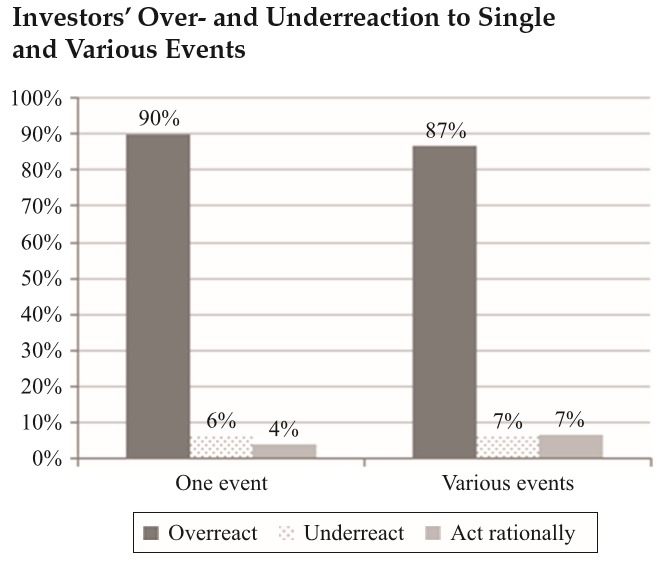 As we move on, I strongly recommend all advisors who have a moment to purchase the article and review.

With the potential that the markets may overreact to uncertainty in various situations, consider where the current market moves stand.

For those who want a bit longer perspective, consider the past 12 recessions (back to 1955) saw a bear market that coincided with a recession that averaged a -36.0% max peak-to-trough move in the equity markets. The average bear market for the last 12 recessions nearly matches the last six with an average peak drawdown of 31.4%.

An indication of what insiders were doing are quite profound. History has said they can be early in their purchases, however, in a longer-term perspective, insider buying has been a very good indicator. This is as of March 13 and the markets declined another 15% last week. 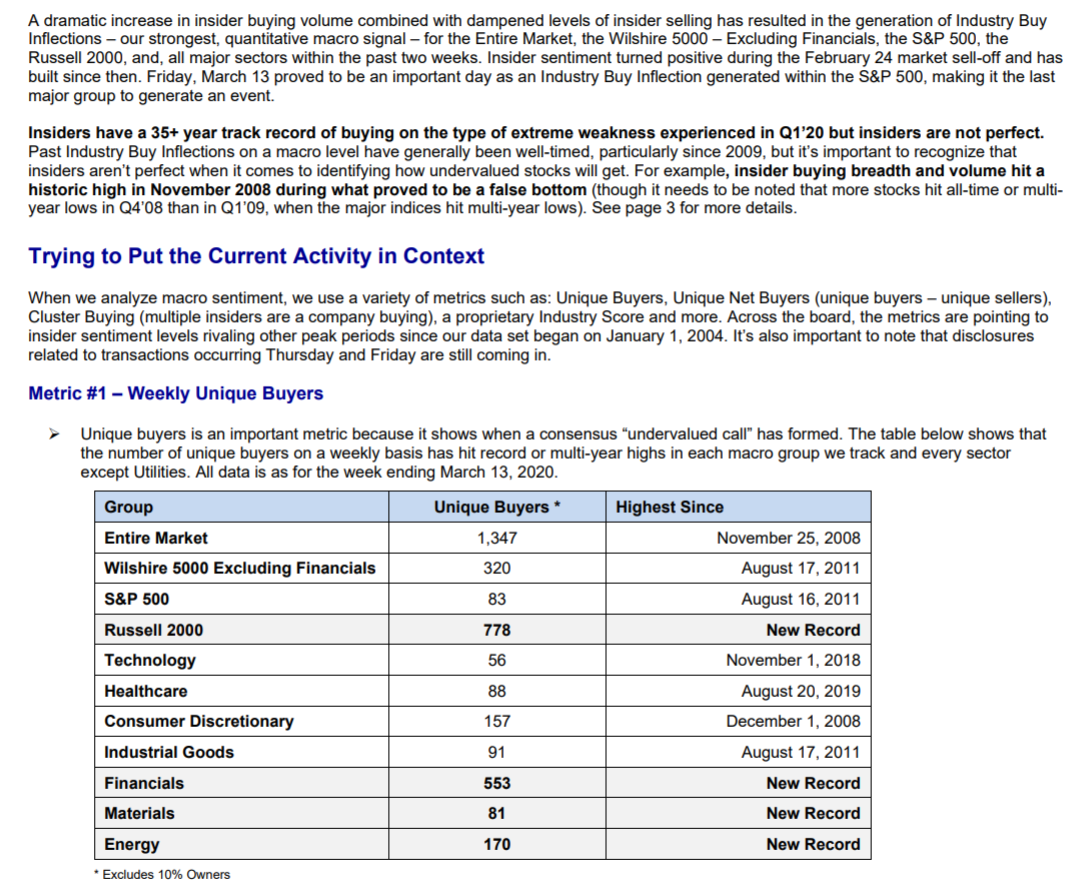 Prior to the 15% drop, the ratio of insider buys to sells hit all-time levels in the Russell 2000, Financials, Materials and Energy. It was also the most insider buying relative to sales for the entire market since November 25, 2008. As they note, it does not indicate a bottom historically, but has proven to be a better long-term indicator. We would expect these levels to not materially improve as the decline in the markets and overall preventive measures may weigh on increased purchases.

The sell-ready-set mindset that took over last week did not just occur in the equity side. Consider the historical selling pressure that hit the credit markets. 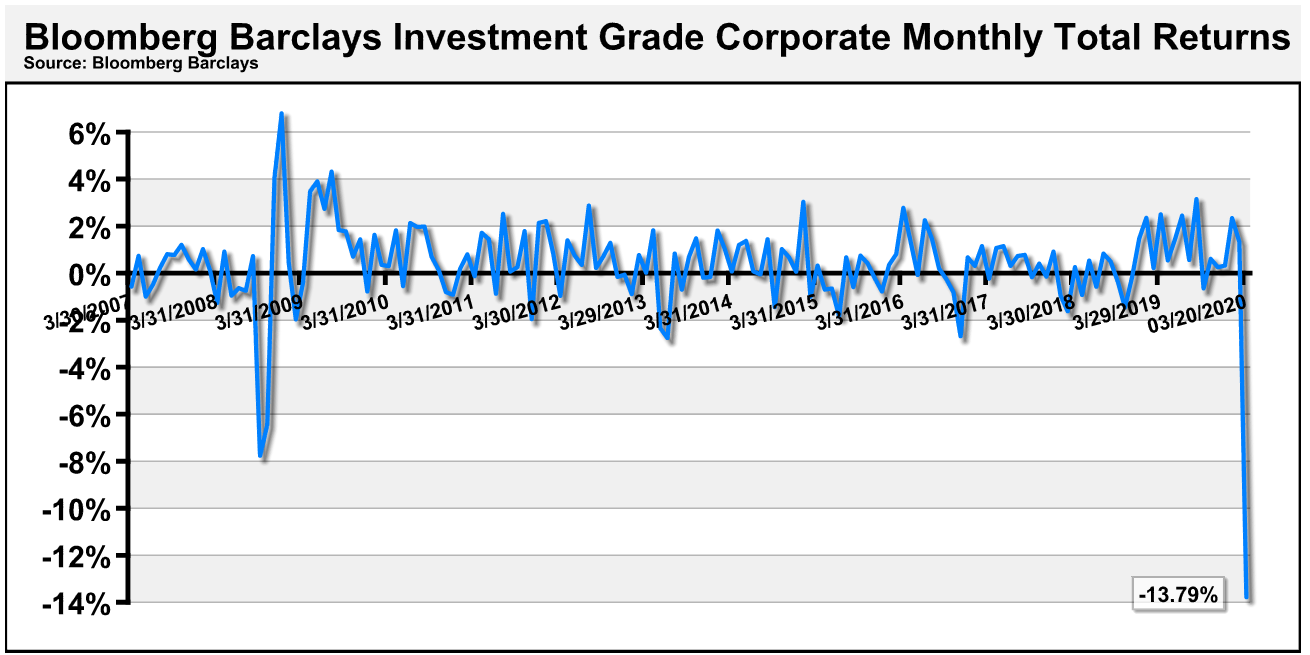 The investment grade universe saw a negative monthly return that was nearly double what the worst monthly return saw at the height of the Great Financial Crisis (GFC).

The situation occurred in the municipal market as well. Again, the negative monthly return (month to date, remember as the month is not over yet) was double the worst print during the GFC.

While the concerns about potential revenue lost to many issues is valid, consider that historical default case to be made for municipals. Consider that, according to Moody’s from 1970-2018, the percentage of all rated Municipals (AAA to Caa) have a 0.16% default rate over any 10-year period. The values in the Municipal sector are quite extraordinary compared to history. Where they were once below the long-term average, the combination of the massive decline in Treasuries and selling pressure from ETFs (Exchange-Traded Funds) and funds compounding the potential strain on the market, has created a tectonic shift to extreme value not seen since the Meredith Whitney Municipal call that never materialized regarding Municipal defaults in 2009 and years beyond.

The amount of liquidity that stood prior to the onset of the quarantine was far different than at past economic strains. The amount of Money Market Fund assets hit an all-time high on Friday, March 20, 2020.

One other area that is distinctively different is the combination of households owning Treasury securities.

Complementing the household balance sheet repair that the GFC impacted was the debt component relative to GDP and household debt service ratios.

And in a broader perspective, consider the total household debt to GDP from its highs. The Great Financial Crisis permanently adjusted the financial DNA of most households from continually elevating risk on the sign of good news to a constant worry about a GFC redux. 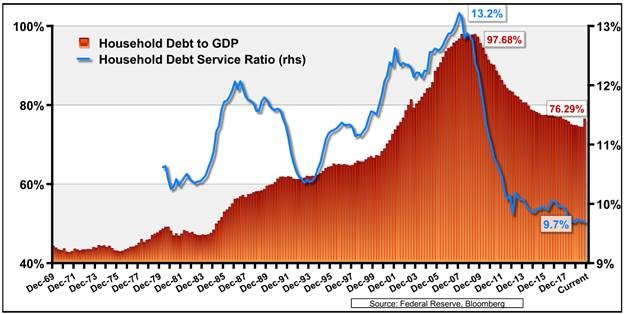 One of the more distinctive changes this time around was the balance sheets of the banks heading into this month.

Banks held $1.8 trillion in cash at the Federal Reserve as of last week. To put this in perspective, consider the cash balance prior to the Lehman Brothers (August 2008) default was a little over $300 billion and was the same at the 2001 recession.

One component that will increase, however, is the FDIC problem banks and number of assets. While the balance sheet assets are strong, a striking shutdown in the economy will cause some increases in this level. We don’t expect this to get to the levels of the past peaks, but it will begin to receive more headlines.

This looks to be more geared toward smaller banks based on JP Morgan’s analysis on the various metrics on LCR (Liquidity Coverage Ratio) and High-Quality Liquid Assets.

The most significant component of this is the first two columns; there is talk of easing the LCR ratio, yet every bank is well above its LCR ratio. Overall, the average over the LCR ratio is 37% (avg ratio is 87.40 and current LCR ratio avg is 124.17). What this means is that the funding and balance sheet repair that was thrust upon banks at the end of the GFC is extraordinary.

JP Morgan also mentioned the top 40 banks have $2.44 trillion in unused credit lines issued and so-far unused to companies, of which 60% is for C&I (Commercial & Industrial) companies, 13% for Financials and the last 27% for all others. This is important when one combines the above liquidity component with the action of the Federal Reserve and soon-to-be Treasury household stimulus packages. Rather than going to shore up banks balance sheets as they did in 2008/2009, the current action should help to maintain the opening of these credit lines far better and therefore creating a stronger and better backstop.

The concluding aspects of this situation is that some metrics will get far worse based on the delayed reporting and that the fear and reality that was thrust upon the global community is completely understandable and should not be marginalized. Rather, this is to show just how unprecedented the action in the markets have been.

When we encounter uncertainty, the emotional biases reign supreme and extrapolation – the false prophet of economists – becomes far more influential. Our belief that we work through this with a greater sense of resiliency has been borne out in many circumstances and situations in the past. The timing of this recovery can be offset by investors who maintain even longer timeframes and attempt to make decisions with as little emotional influence as possible, but this is easier said than done.

Trends in Advisor Behavior During Market Volatility - Week of July 20, 2020

In addition to changes in asset class exposure, client cash levels have not changed in any meaningful way for the past six weeks.

Review current performance analysis and weekly statistics for stock and bond markets in the U.S. and abroad.