Corporate credit quality has strengthened at a near unprecedented pace in 2021. The sector is benefitting from a lockdown rebound and ample consumer and corporate liquidity. Corporate default rates are near record lows, rating agency upgrades far exceed downgrades at a near 3:1 pace, corporate cash flows continue their growth, while U.S. corporate profits in 2021 have accelerated at an unprecedented pace which continued into the 3rd quarter of 2021. 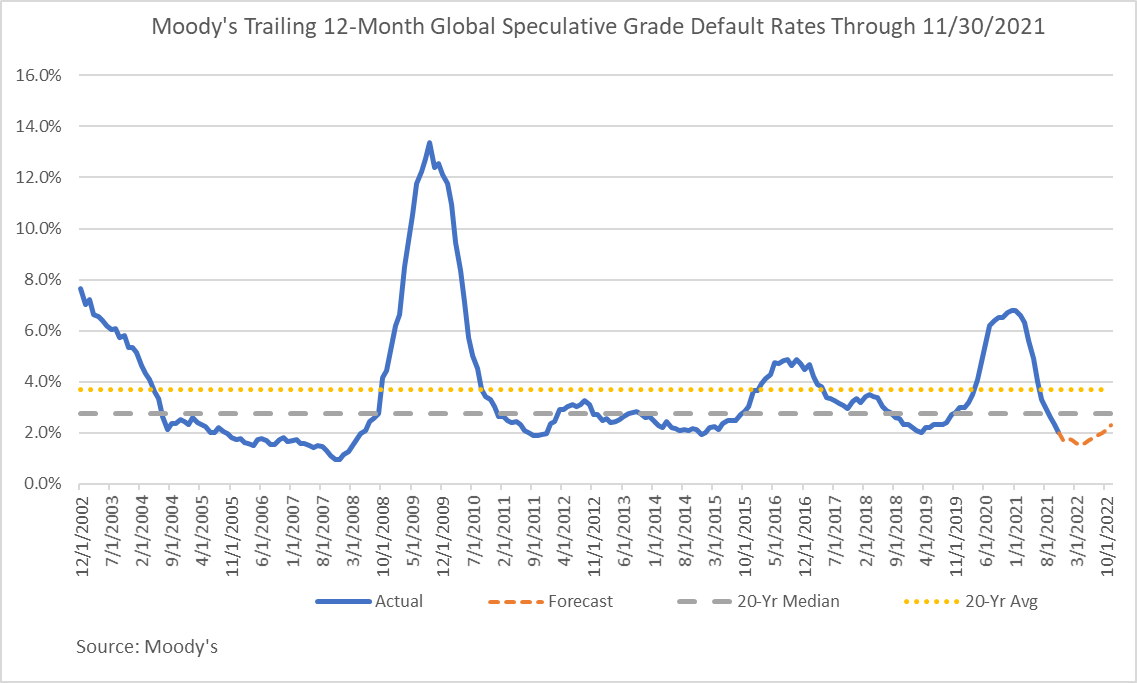 So then, what can possibly reverse this near unprecedented improving credit juggernaut? Maybe, an unprecedented confluence of events that includes record quits rates, historic inflation levels, and a resurgence of COVID-19 through its omicron variant.

The Big Quit: The latest Job Openings and Labor Turnover Survey (JOLTS) indicates that a record 4.5 million workers quit their jobs in November for a quits rate of 3%. These are record levels of workers quitting and quits rate.

These enormous job market constraints are crippling business capacity resulting in much lower economic activity than would be the case if business operations were running smoothly. This will have the inevitable result of business costs going up as companies bid on fewer prospective workers. The pandemic appears to have accelerated a structural change in the workforce. Older skilled workers may have taken retirement earlier than previously planned due to the pandemic, which may in turn have worsened the skills mismatch — another structural issue. The drop in the labor force could make the Fed move sooner on higher wages. A smaller workforce historically means higher wage gains, increasing the risk of a wage price spiral. Wage gains are now at a 14-year high, as indicated by the Atlanta Fed wage tracker and other measures. If more people of working age remain out of the workforce longer than currently anticipated, the structural shift in the labor force would be greater, resulting in the potential for continued job market supply constraints and higher wage pressure in the foreseeable future. 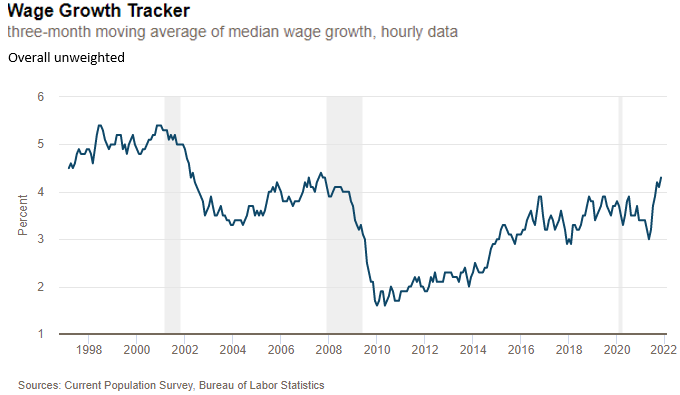 Together with widespread price gains, the Fed funds rate will likely lift off this year.  This is contributing to the…

Great Inflate: Surging global demand, extraordinarily benign financing conditions, supply chain strains, and soaring energy prices are just some examples of the powerful forces triggered by the shock of COVID-19. These have triggered inflationary pressures. The original thinking was that there would be a modest and temporary rise in inflation in early 2021 as economies re-opened. However, events turned out differently. Price pressures have persisted and broadened more than expected. The debate has shifted from whether inflation is transitory or not, to when will the current inflationary trends moderate. In December, the Fed shifted to an earlier end of their asset-buying program and signaling they favor raising interest rates in 2022 at a faster pace than economists were expecting. The central bank said it will double the pace at which it’s scaling back purchases of Treasuries and mortgage-backed securities to $30 billion per month, putting it on track to end the program in early 2022 concluding in March, rather than mid-year as initially planned. The faster pullback puts the Fed in position to raise rates earlier than previously expected to counter price pressures. Overall, the FOMC (Federal Open Market Committee), in response to inflationary pressures, now anticipates a steeper path of rate hikes than at the last meeting — three rate hikes for 2022, three for 2023, and two for 2024, taking the federal funds rate to 2.1% in 2024. According to the Bureau of Labor Statistics, the annual inflation rate in the U.S. accelerated to 6.8% in November 2021, the highest since June 1982. It marks the 9th consecutive month the inflation stays above the Fed's 2% target as global commodities rally, rising demand, wage pressures, supply chain disruptions and a low base effect from last year continue to push prices up. Upward pressure was broad-based, with energy costs recording the biggest gain (33.3% vs 30% in October). Excluding food and energy, inflation went up to 4.9% from 4.6%, the highest since June of 1991. 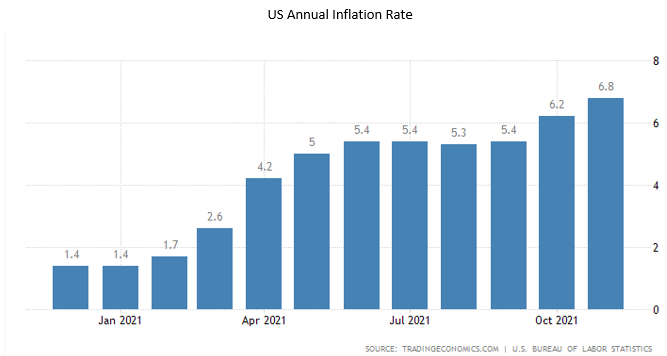 However, multiple sources, including the Fed, are forecasting that consumer price inflation will peak between now and the end of the first quarter of 2022, easing in the 2nd half of 2022. While monetary tightening will likely occur in response to inflation, it will probably not derail growth if it is gradual and well communicated to financial markets, avoiding surprises, which is what is currently happening. Moreover, so far, investor enthusiasm for credit remains undimmed. Additionally, companies in most sectors have been able to pass on costs or absorb them in a variety of ways (demand offsets, product mix adjustments, hedging, etc.) as evidenced by strong corporate margins. Corporate profit margins are at record levels and should be able to absorb cost increases that are not passed on to the consumer. A word of caution — with inflation running “stronger and longer,” the potential for central bank policy missteps has increased. As price pressures combine with supply constraints, investors could soon demand higher returns for the risks they’re assuming. This could result in the repricing of financial and real assets, higher debt-servicing costs, and tighter financing conditions. But for many, pent-up demand outweighs escalating costs, allowing for cost pass-throughs and profit margin support. 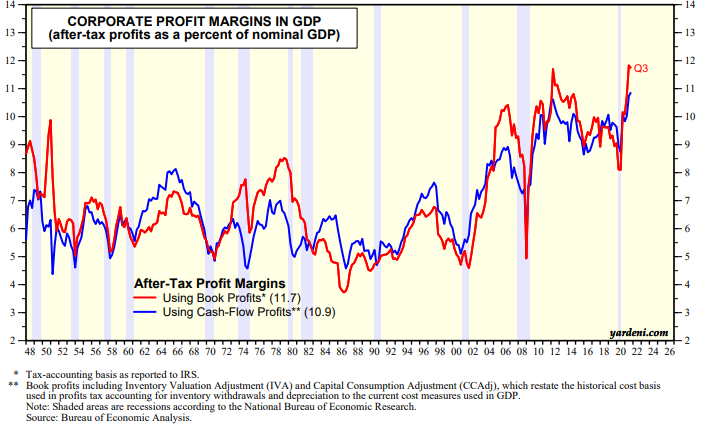 The Viral Spiral: The potential for coronavirus variants such as omicron adds another layer of uncertainty about the pandemic and its effects on the economy and credit. While omicron has spread rapidly, symptoms appear to be milder than with prior variants, and government officials are vowing not to mandate a shutdown of the economy. That being said, thousands of flights have been canceled, back-to-office plans shelved, and restaurants — among the most adversely effected businesses due to COVID-19 — are under pressure again, according to OpenTable. During the week ending December 27, the number of seated diners was down 27% from two years earlier, per OpenTable. Firms around the country are once again canceling business travel and social events. The sports world is also reeling with the National Hockey League pausing its season last week and multiple college football games getting canceled due to infections. Moody’s chief economist says that he plans to dim his 2022 economic forecast due to the one-two punch of omicron and the apparent demise of the Build Back Better Act. Per Moody’s, "With omicron looming and D.C. in disarray, risks to the economic recovery…are not inconsequential and are rising." But, is this enough to derail the credit juggernaut? Ultimately, the impact to the economy, supply chains and daily life will be shaped by how long the omicron wave lasts — and how society reacts to it. And there is reason to hope that omicron is moving so rapidly that its impact could be relatively short-lived. In the meantime, cruise lines — despite the highest warning from the CDC (Center for Disease Control) — remain packed while movie theater attendance is growing. Pent-up demand appears to remain pent up. Meanwhile, vaccinations continued to pick up in recent weeks. While short-term containment measures have been put in place by governments, there have not yet been mandatory shutdowns. With no hard lockdowns recurring, it more than likely means that the omicron variant is another headwind to the economy, but not enough to derail it and not enough to reverse or even stop the improvement in corporate credit. That’s not to say some sectors of the economy won’t be hurt — notably hotels and leisure, media and entertainment, retail and restaurants, all of which still have substantial proportions of weaker entities that are relatively vulnerable to the economic outlook and broader financing conditions. But as omicron passes, S&P believes that 2022 will likely continue to be shaped more by the pace and pressures of recovery than by COVID-19. Supply-chain disruptions, labor shortages and higher prices for some goods and services resulting from pandemic-induced lockdowns will stretch into 2022, but their effects will probably lessen in the second half of the year.

Conclusion: The Big Quit, Great Inflate, and the Viral Spiral appear to more resemble credit speed bumps rather than a toxic credit cocktail. In 2021, companies took advantage of accommodating markets to pay down debt and extend maturities. This gives them a greater ability to withstand economic shocks. 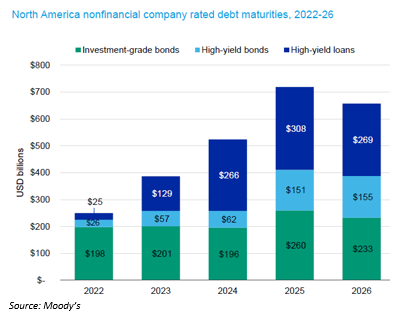 Despite the aforementioned pressures, all indications point to continued economic growth. Given the strength of corporate credit as evidenced by strong margins, low default rates, pent-up demand, and improved credit metrics, these trends are not likely to reverse, although a moderation may be expected.

The investment, risk and business activities executed by RIAs across the nation.

Weekly Market Compass: Have Omicron and the Fed changed our 2022 outlook?

At Invesco, constructing our annual outlook is an important endeavor.